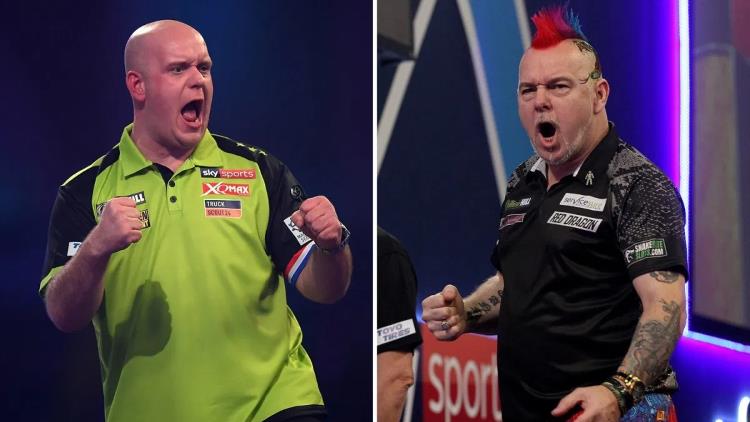 After weeks of playing, the best two dart players do battle at Alexandra Palace on Thursday morning.

Michael “The Green Machine” Van Gerwen is a proven winner on the world stage. He has won everything there is to win in darts but the same can’t be said for Peter Wright.

He has been one of the best players over the last 10 years but has captured only one major title.

Wright isn’t a fan of MvG and their storied rivalry adds another chapter this week.

We look at all the best bets for the Van Gerwen vs. Wright final on Thursday morning.

It should come as no surprise to see bookmakers siding with Michael van Gerwen for the final.

He’s a three-time winner of this tournament and he is hellbent on catching Phil Taylor’s incredible and seemingly unassailable 16 World Championships.

However, van Gerwen will need to improve on his semifinal efforts in order to beat a confident Peter Wright. Van Gerwen struggled past Nathan Aspinall and it was more about missing doubles than quality play.

MvG is great at turning up for finals and he’ll need to here. He is playing below his brilliant best and he can’t afford to switch off in the final.

For Peter Wright, it’s a very different story. He has lost 10/11 finals throughout his career and that doesn’t give punters much confidence.

However, he is playing better for Van Gerwen to this point in the tournament and he’s pounding the triple 20 with regularity.

The trouble with Peter Wright begins when his confidence takes a hit. He is a fickle player and that’s evident with how many times he changes darts throughout a tournament.

Wright might be the most colourful player on the circuit but he does struggle with confidence. In saying that, he has no reason to doubt himself this Thursday morning.

So, where is the value when betting this game? Michael van Gerwen is the $1.35 favourite and we would be confident that he could win.

It’s not just about betting on who will win the game in darts. There are some wonderful exotic options for punters to dig in to.

The correct score market is always a popular option for value punters, although it can be tough to hit.

That being said, punters are getting great odds for every option and it’s certainly worth having a punt.

We are expecting MvG to win the game, therefore, we’re going to favour him in the correct score market.

Wright should be able to keep it close but van Gerwen will show his class late. Look for Wright to go up early but eventually succumb to the might of MvG.

Van Gerwen should be able to win by two or three sets.

Who doesn’t love a 180? The game referee shouts 180 and the crowd goes wild, but you could shout even louder by landing a winning bet.

Most 180’s is always a popular betting option and although MvG is usually the favourite for this bet type, he’s not this time around.

Peter Wright has been in fine 180 form and there’s another key reason why he’s the best bet for this option.

Michael van Gerwen likes to switch down to the 19 and he has been hitting 177 and 174 throughout the tournament. On the other hand, Wright hates switching and will stick with the treble 20 through thick and thin.

In a long-form game, Wright should have the advantage unless MvG gets on his trademark 180 roll.

Stick with Wright and most of the money is coming for the Scotsman.

Another popular betting option for darts punters is the Highest Checkout market.

Just as much as we love 180s, we also love a big checkout. 170 is the biggest checkout on offer and bookmakers are offering some juicy markets.

We are liking van Gerwen to have to the highest checkout in the game. He often checks out with a 170 (T20, T20, Bullseye) and it’s an out-shot that can turn the game on its head.

Bookmakers are being generous in offering $1.76 for van Gerwen to have the highest checkout and those odds are appealing.

Punters can double down by having a bet in the highest checkout score market. It’s currently set at 148.5 and we believe it will go over that.

We see MvG taking out either a 170 or 160 to close out a leg, which would see this bet cash easily. Bookmakers are offering $1.85 for this option. Alternatively, take any checkout of 160 or greater and that pays $2.63.

Our last exotic bet is the first leg winning double option. This bet is over quickly, so be sure to watch the first leg of the game.

Punters need to decide what double will be the winning out shot to win the leg. Statistics typically point towards the double 20 or double 16. Those options have been heavily backed in this market but we’re going for something a little different.

We like the double 4 or double 12 option. Both are even numbers, so there is a better chance of hitting and both players can often go chasing doubles.

Given the odds on offer for both, we’ll happily take those options.

About the Author: admin