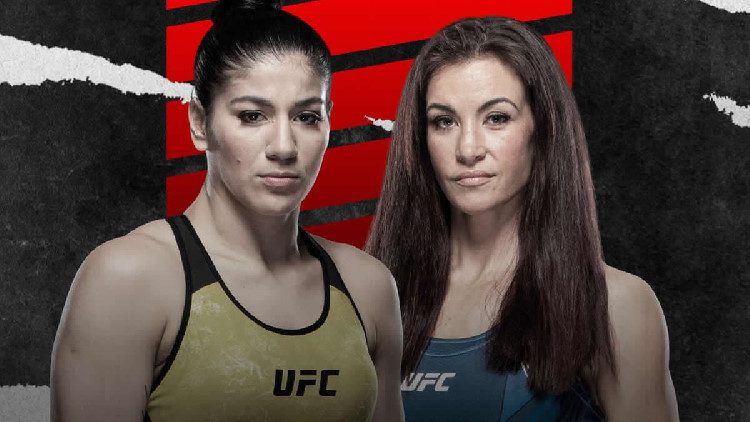 Former bantamweight champ Tate made a successful return to action from retirement in July as she immediately hit her stride against Marion Reneau, resulting in a third round TKO stoppage. Now she looks to continue her journey back towards a title shot after a brief postponement due to having tested positive for Covid.

As for Vieira, she made a big impact in her early Octagon outings, putting together four wins in a row against notable opponents like Cat Zingano and Sara McMann, but since then has lost two of her last three fights.

Tate looked good in her comeback fight, showing no signs of ring-rust and looking more comfortable and assured in the striking department than in the past.  Meanwhile, she’s always had a very solid wrestling foundation to work with and on the night served up a reminder of her ability to produce submissions too. The fact she can transition fairly smoothly between these different aspects of her game is a plus point and she’s also a durable competitor with good cardio.

Vieira is capable on the feet and has a couple of inches in height and reach over her opponent to work with here, but she is quite hittable and has been KO’d by Irene Aldana in the past.

With a background in BJJ and judo, Vieira is at her best on the mat where she can be stifling on top with her control. She doesn’t have the strongest killer instinct though, and if she wants to grind out a decision win she’s going to have to go five rounds for the first time in her career.

This will be a close fight, but I do favor Tate as I feel her striking improvements could pay dividends, while though she might not have it all her own way on the mat, I believe she can be very competitive in the grappling battle and will gain the upper-hand the longer the fight goes thanks to her cardio and experience, leading her to a decision victory.

Chiesa got off to a great start in his welterweight campaign with four wins in a row, but is now coming off a first round submission loss to Vicente Luque in August.  Now he prepares to go up against Brady, who currently holds a perfect 14-0 record, including four wins in the Octagon so far.

These two are quite similar in as much as they both are strong grapplers who do their best work on the mat. Chiesa likes to embrace the grind and impose his will on opponents, smothering them on top, and though he’s doesn’t tend to throw many strikes while he’s there, he is good at finding ways to take his opponents back and threaten with chokes.

Brady is the shorter, stockier fighter of the two, giving up 3″ in height and 3.5″ in reach to Chiesa. He’s a strong, explosive wrestler who gives his opponents little space to work with, but will be more active with strikes on top than Chiesa. He’s also shown off his submission ability with finishes in his last two fights, which could be an option here as ‘Maverick’s’ submission defense is not strong as his offense, accounting for four of his five career losses while in the UFC.

Neither man is as impressive on the feet, but they can hold their own. Chiesa will work from range with long, straight punches, but often is just looking to set-up clinch and takedown opportunities, particularly if he’s coming under fire. Brady is more compact, has more power and I feel has a slight technical edge with his output and ability to counter, but there’s not a whole lot in it.

So, this really is an extremely closely matched fight that’ I’m going back-and-forth about, particularly as we’ve not yet seen Brady go up against this upper echelon level of welterweight talent. Still, he’s the physically stronger of the two and has yet to be taken down or submitted, while his own submission ability could trouble Chiesa’s defense too, so I’ll take Brady to get more control time on top and secure a tapout finish in the third round here.

Prediction: Sean Brady to win by submission in Rd3.

Yahya comes into this fight having picked up a win, a loss and a draw from his last three Octagon outings, while Kang has been more consistent with three wins in a row, albeit with two coming by way of split decision.

At 37-years-old Yahya is no longer in his prime and his athleticism is almost non-existent, but due to being a high-level Brazilian Jiu-Jitsu specialist he is still as dangerous as ever when he gets opponents to the mat and gets hold of their neck or arms, with the crafty veteran now having racked up 21 finishes by submission from 27 career victories.

Yahya really is a grappling specialist, so he doesn’t have a whole lot to offer on the feet, though it’s also worth noting he’s only been stopped two times by strikes in his career. Still, this will be an interesting fight since Kang also has a strong submission game, with 11 wins from 18 career wins.

Kang will have 3″ in height and a major 6″ advantage in reach over Yahya, is certainly the more athletic of the two and is also significantly more well-rounded skill-wise.  Therefore, if he can keep this one standing then he should be able to pick apart Kang very comfortably, though he doesn’t necessarily have the raw power to put him away.

If Kang is willing to contend with Yahya then things could get very interesting, but it feels like the ball is in his court and unless he goes for the takedown the Brazilian will struggle to get him there. As long as Kang doesn’t play with fire too long on the mat I favor him to outstrike his opponent and emerge with the victory here on the scorecards.

Formerly known as Joanne Calderwood, but now carrying the surname Wood after marrying her coach, the Scottish fighter has bounced between wins and losses during her last six Octagon appearances, with her latest being a split decision defeat to Lauren Murphy.

Meanwhile, Santos lost in her UFC debut but is now riding a three-fight winning streak against respectable opposition in Molly McCann, Gillian Robertson and most recently Roxanne Modafferi.

Wood carries the greater overall experience here in terms of high-level opposition though. She is a capable all-rounder but her greatest asset is certainly her muay thai striking, enabling her to comfortably unleash elbows and knees into her attacks and clinch work, and her combination work sees her deliver a high-volume output that can throw her opponents off their own game.

Santos is the much more athletic fighter though and I believe she’ll have a speed and power advantage, while also having very good wrestling ability that’s only enhanced by her strength.

Overall I feel that there’s more spark to Santos right now and I see her strength, power and explosiveness paying dividends both on the feet and in the wrestling department to secure a decision victory.

Grant was building up some nice momentum not so long ago with a three-fight winning streak that included back-to-back KO victories, but has since dropped a decision loss to Marlon Vera, while Yanez has racked up a trio of finishes via strikes since joining the promotion last year.

Grant is a bit wild and unorthodox offensively, throwing everything into his strikes and generating a significant amount of power, but he doesn’t have a great deal of speed or clean technique and though he’s durable he does leave his chin exposed too often.

While his striking has delivered some big successes of late, Grant also has a good wrestling game too and he may well look to utilize that here as Yanez is very dangerous on the feet with his quick, hard-hitting and high-volume technical striking output. His confidence will also be bolstered by the fact that he’s yet to be finished in his 17-fight career inside the distance by either strikes or submission.

This should be a fun fight then, but I think Yanez’s sharper striking could well punish Grant for his lack of speed and lapses of defensive discipline and that’ll lead him to a second TKO stoppage.

Prediction: Adrian Yanez to win by TKO in Rd2.