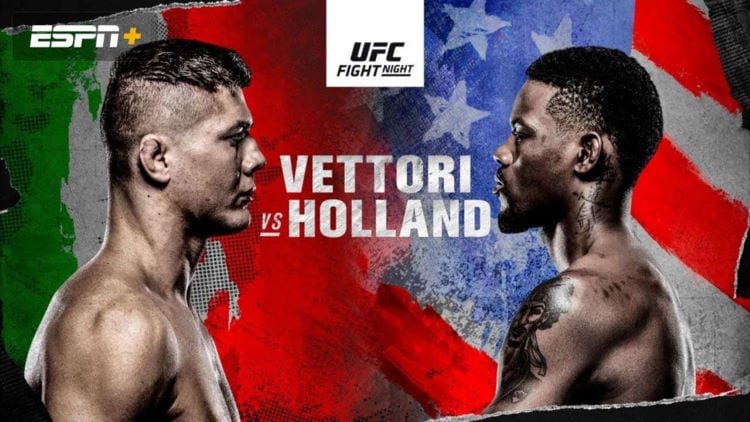 While you have to admire Holland’s willingness to fight any man at the drop of a hat, you have to question the wisdom of his decision to step up and fight the in-form Vettori on short notice just weeks after Derek Brunson completely outgrappled him on the mat for five rounds.

That fight felt like a wake-up call for Holland, highlighting his need to work hard on his takedown defense, along with the importance of remaining mentally focused on the task at hand in high-pressure situations and show more urgency when fighting off his back.

Instead, it feels like Holland may be impulsively attempting to get back to winning ways as quickly as possible to get rid of the bitter taste of defeat and silence his newfound critics, and while there’s certain match-ups that could have worked in his favor that way, Vettori does not seem like one of them.

The problem is that, like Brunson, Vettori has solid wrestling ability to be able to bring Holland to the mat and keep him there for lengthy spells, and on top of that he also has a very capable submission game too.

Of course every fight starts standing and even against Brunson, Holland’s dangerous striking and lanky limbs enabled him to have his moments when he was given the opportunity to unleash them, and he’ll have an even more significant 3″ height and 7″ reach advantage to work with here.

Vettori is comfortable wherever the fight goes though and has also never been stopped inside the distance, so he’s going to be pressing forward and pushing the pace with confidence here, showing a willingess to engage, while picking his moments to swoop for takedowns.

Holland’s definitely capable of landing something big and changing the momentum of the fight, but based on what we saw from him last time out and his lack of time to make adjustments, it seems far more likely that his weak takedown defense is going to come back to haunt him here, leading to Vettori winning comfortably by decision.

This is a good co-main event between two featherweights in top form right now, with Yusuff having racked up four wins in a row since joining from the Contender series, while Allen is an even more established presence in the division, having yet to taste defeat in his seven Octagon outings to date.

Yusuff is a heavy-handed striker who will have the power advantage here and is more of a finishing threat, but Allen operates well on the outside and has speed on his side, so he may well look to keep his opponent at bay early and then capitalize later with his superior cardio.

Pre-fight Allen has been suggesting he’s relishing the opportunity to test his striking skills against Yusuff and feels he still has more to show in terms of his punching power than we’ve seen from his Octagon outings so far. That being said, I actually feel his best bet here is to utilize his ground game as he should have the edge there with wrestling and potential submission attempts.

Perhaps it won’t be his gameplan to start with, but even though he’s not been finished to date, once he feels Yusuff’s power I think Allen will look to mix things up more and as such I’ll take him to outwork Yusuff in the later rounds to emerge with a win on the scorecards.

Fight cancelled on short notice due to Covid-19 protocols.

Alvey is in dire need of a win as he drops back down to middleweight coming off four losses and a draw, while Marquez has gone 2-1 in the UFC so far and picked up a submission win last time out.

Alvey has always had big power in his punches, but he has a very lethargic output and has put together a lot of uninspired performances in the past few years that makes it feel like he’s just going through the motions. Perhaps he’s hoping that the cut down to 185lbs can breathe new life into his career, but truth be told, he looked much the same way in that weight class too.

There’s definitely more fire in Marquez’s belly and while he doesn’t have the best striking technique he’ll happily swing for the fences on the feet, while also looking to set up opportunities to clinch up and take the fight to the mat.

Marquez doesn’t have the best cardio, so this one might get quite ugly by the end, but I think overall ‘The Cuban Missile Crisis’ will outwork Alvey to earn a decision victory.

This is Ansaroff’s first fight back after she and partner Amanda Nunes welcomed their first girl into the world back in September of last year, something that Dern can relate too, having also taken time out to have her first daughter back in June of 2019.

Dern’s comeback fight back after her pregnancy didn’t go well, suffering the first loss of her career against Amanda Ribas, but she’s since gone on a three-fight winning streak, showing off her high-level Brazilian Jiu-Jitsu along the way as well as notable improvements to her previously fairly primative striking ability. On the downside, her ability to reliably get the fight to the ground remains a significant issue for her.

Ansaroff is a good kickboxer who might not have the same power as Dern, but likely will still have the greater technique and better movement, although it’ll be interesting to see Dern’s stand-up progression as she continuing to develop under striking coach Jason Parillo.

The unknowns make it difficult to pick this fight with confidence, particularly as to how the now 35-year-old Ansaroff will be after a two year layoff and not much more than half-a-year after pregnancy?

Time will tell, but I think she has a skill-set to frustrate Dern, working on the outside, using faster footwork and crisp striking to keep her at bay and deny the takedowns that could swing the fight against her. I’ll take Ansaroff to win by decision.

Perry is fortunate to still have a place on the UFC roster given that not only has he last six of his last nine fights, but he’s also had repeated troubles outside of the Octagon and to top it off also missed weight for his last fight.

Rodriguez is also coming off a loss, but he had won his first three UFC fights in a row prior to that, showing off his striking and submission prowess along the way.

Both men are heavy-handed, while at the same time also being hard-headed, so this could well turn out to be a bit of a war. Rodriguez will have the advantage of 3″ extra in height and reach and he has speed to go with his size, but he is quite hittable at times, which could be problematic.

The problem here is that we just don’t know which Mike Perry is going to show up. He’s looked off-the-boil for several fights now, so while it’s possible he’s turned things around and regained his focus, it’s absolutely not something you can put any faith in.

There’s no such concerns regarding D-Rod and so I like his chances of outstriking Perry here, but having to settle for a decision rather than a big finish.