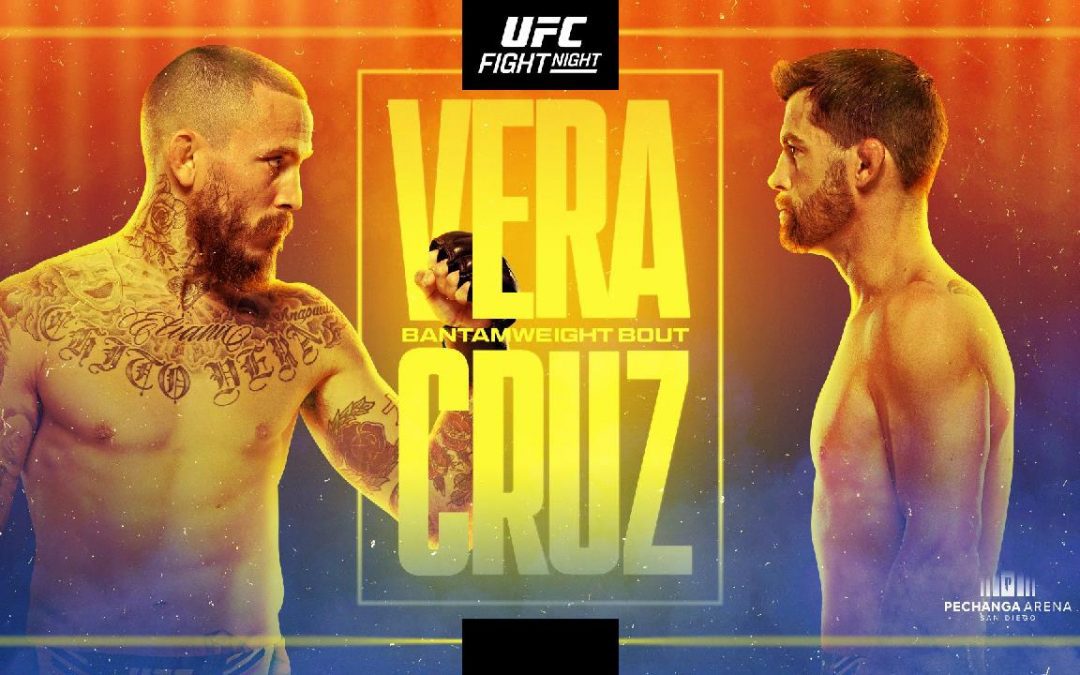 With three wins in a row, Vera has risen up to No.5 in the bantamweight rankings and now takes on a former champion in Cruz, who is coming off back-to-back wins.

At the peak of his powers, Cruz was an incredibly difficult puzzle to solve for the rest of the division with his unorthodox, high-volume striking game that saw him constantly darting in and out with fast footwork that helped him strike from  angles his opponents weren’t expecting, enabling him to hit without being hit in return.

Terrible luck with career-threatening injuries resulted in vast periods of his career being spent on the sidelines though, and so perhaps it’s just worth savouring the fact that at 37-years-old is even still able to compete. And he’s still picking up some wins along the way, but while he’s still a tricky fighter to deal with it does feel like he’s not as fast and sharp as he once was, and that means he is able to be caught at times, and there are question marks over his durability nowadays.

As for Vera, he seems to be a fighter who is evolving over time, and is in his prime at 29-years-old. Technically he’s not on Cruz’s level, but he’s a more refined striker than he was earlier in his UFC career, has good volume and holds a distinct power edge over Cruz as well as a 2.5″ reach advantage.  He has also now shown that he has the gas tank to go five full rounds.

Vera is certainly the easier of the two to hit though, which is a concern, even if Cruz is unlikely to deliver fight-ending power.  The former champ is also the better wrestler of the two, though Chito is no slouch in the grappling department.

In the end I see the fight being won and lost on the feet, and while Cruz may have the higher punch count, it’s Vera who will be landing the more hurtful blows and will be able to carry that into the later rounds, leading him to a fourth round TKO finish.

Prediction: Marlon Vera to win by TKO in Rd4.

2-2 in his UFC run so far, Landwehr now faces a short-notice opponent in Onama, who is 2-1 in the promotion and holds a 10-1 record overall.

The 34-year-old Landwehr is a fighter who loves to apply pressure and push a hard pace. He has good wrestling ability, but all too often he casts that aside in favor of brawling. Earlier in his career that worked out fairly well for him, with a strong chin and high-volume offense getting the better of opponents on the regional scene, but he has suffered both a KO and TKO loss via first round knee strikes during his time in the UFC so far.

That’s concerning against a big, athletic featherweight like Onama, who will have a 2″ height and reach advantage here, which he’ll use to good effect with his striking from range. He also has a distinct power advantage and the speed to go with it. All 10 of his career wins have ended by either strikes or submission, but his takedown defense isn’t the best and could be exploited.

Despite his wrestling ability I’m just not convinced that Landwehr will do the sensible thing and make good use of it here, and I don’t see an aggressive striking strategy ending well for him here, with Onama emerging with a first round TKO finish.

Prediction: David Onama to win by TKO in Rd1.

Unusually, two new recruits to the UFC immediately get a main card spot here, with Mexico’s Yazmin Jauregui bringing a perfect 8-0 record to the octagon after a stint in Combate, while Lucindo hails from Brazil and holds a 13-4 record.

As you might expect from a Mexican-based fighter, the 23-year-old Jauregui has very good boxing ability and has had an impressive finishing rate on the regional circuit for a strawweight, stopping six of her eight fights inside the distance via strikes.

Her opponent has more experience in the cage, despite actually being even younger at just 20-years-old. In fact, somewhat alarmingly, Lucindo made her pro-debut in Brazil when she was just 14-years-old against someone twice her age, and she won!

While she began her career as a striker, Lucindo is a physically strong fighter who is at her best on the mat with her wrestling.

Jauregui appears to have solid takedown defense though and I think she holds a distinct advantage with her crisp striking, which will lead her to a win on the scorecards here.

Clark has had a real mixed bag of results in the UFC, with a 7-6 record to date, but he is coming off a TKO win last time out as he now prepares to take on an undefeated 11-0 fighter in Murzakanov, who won his UFC debut in style via a flying knee KO earlier this year.

Clark is a big man, even fighting at heavyweight last time out, and back down at 205lbs he’ll have a 2″ height and 4″ reach advantage over Murzakanov. Despite the outcome of his last win he’s not typically known as a big finisher and has more of a steady, grinding style, using his wrestling to win rounds and get the nod on the scorecards. However, he has been vulnerable to submissions on the mat and he’s not always the most comfortable on the feet.

While Murzakanov may be the smaller man here, he’s the more dangerous of the two in terms of his striking prowess and has a strong finishing record to prove it. That being said, his performances of late outside of the actual fight-ending finishes haven’t been overly impressive, so it still remains to be seen how well he’ll do in the UFC as the level of opposition increases.

So that makes this a tricky one to call as Clark’s form is inconsistent, but his size and wrestling advantage could be key here if Murzakanov doesn’t get off to a strong start and so I’m cautiously picking him to emerge with a decision win here.

After two TKO losses in a row, Lipski steadied the ship last time out with a decision win over Mandy Bohm and now goes up against Cachoeira, who has won three of her last four fights in the promotion.

Known as ‘The Queen Of Violence’, there was some hype around Lipski heading into her time in the UFC that’s she’s largely been unable to live up to, posting a 3-4 record since. That being said, the 28-year-old did look good last time out. She has an aggressive muay thai based striking game, good power and she can use her decent wrestling and grappling ability when required too.

Cachoeira actually also holds a 3-4 record in the promotion and she too embraces a highly aggressive approach with a brawling-based striking style that sees her willingly eat a lot of shots while looking to land her own hard-hitting strikes.

Lipski is the better technical striker here and is the more well-rounded fighter in general, so if things aren’t working out for her on the feet she may look to switch things up with mat work, and as such I’ll take her to emerge with a decision victory.

After three finishes via strikes to start off his UFC career, Silva lost to kickboxing ace Alex Pereira last time out and now goes up against Meerschaert, who has far more UFC experience under his belt, but mirrors his opponent’s recent form with a trio of wins having been ended by a loss in his latest fight against Krzysztof Jotko.

Both of these fighters are proven finishers, but the methods they get the job done by are completely different. For Silva it’s his striking ability that’s led to him securing an impressive 19 finishes from 22 career victories, while Meerschaert also deserves a great deal of credit for delivering no less than 26 submission stoppages from 34 career wins.

Meanwhile each is at least somewhat vulnerable to the others strengths. Meerschaert’s striking is functional at best and he’s the not the most sound defensively. To be fair he’s only been stopped three times by strikes in his long career, but two of them came in 2020 when he was TKO’d by Ian Heinisch in the first round and then KO’d by Khamzat Chimaev in 17 seconds.

Silva absolutely has the striking ability and power to do something similar, but at the same time, his own takedown defense is far from bullet-proof and he has been submitted five times in the past during his run on the regional circuit, and Meerschaert is a far more dangerous opponent on the mat than that calibre of opposition.

I think Silva’s less vulnerable in that regard these days though and I do feel he can make his mark on the feet to produce a second round TKO stoppage.

Prediction: Bruno Silva to win by TKO in Rd2.