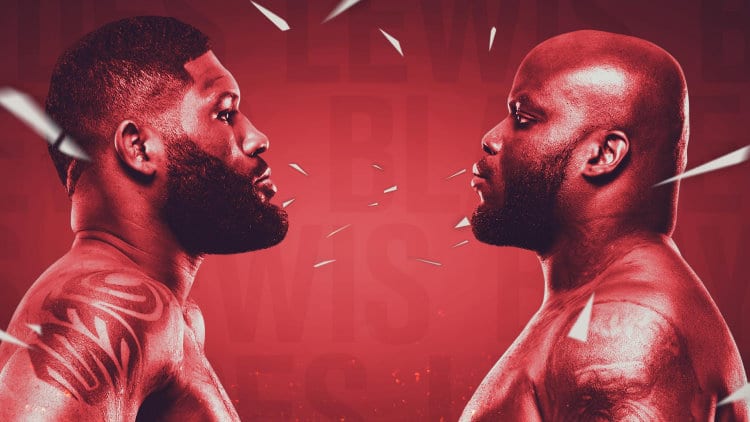 Two of the leading heavyweight contenders clash here, though a win here won’t set either man up for a title shot as Dana white recently declared that Jon Jones will be next in line to fight the winner of the upcoming Stipe Miocic vs. Francis Ngannou title bout.

This fight was originally scheduled to happen in November, but Blaydes tested positive for Covid-19 and has since made a full recovery. Blaydes is currently in the midst of a four-fight winning streak and Ngannou remains the only fighter to ever have beaten him in his 17 fight career to date.

That’s thanks in large part to Blaydes excellent wrestling ability and solid ground-and-pound, but he’s also improved his striking over time and has a disciplined, strategic approach to fighting and good cardio for the weight-class too.

We have seen Blaydes finished twice on the feet by Ngannou though and if there’s one man who can match the fearsome power of ‘Predator’ it’s ‘The Black Beast’. Lewis is deceptively fast for his size and though he has had a habit of getting extremely tired during his fights, he’s still capable of pulling off a one-punch KO finish out of nowhere at any time.

Lewis’ takedown defense isn’t great and on the mat he lacks technique, but is surprisingly good at using brute force to battle his way back upright. That will be harder to do against a wrestler of Blaydes caliber though, and while there’s a very real possibility that Lewis can catch him when they are on the feet, I’d expect ‘Razor’ to stay focused on a wrestle-heavy gameplan that will leave his opponent exhausted and vulnerable to a late TKO finish on the mat.

Prediction: Curtis Blaydes to win by TKO in Rd4.

Vieira has so far performed well in the UFC, put together five wins in six fights, though a KO loss to Irene Aldana in late 2019 did temporarily dent her title ambitions.

On the other hand, former Invicta champ Kunitskaya’s UFC run has been a mixed bag, being TKO’d in a tough debut against Cris Cyborg and also stopped by strikes against Aspen Ladd, but having also picked up wins over the likes of Marion Reneau and Lina Landsberg.

Kunitskaya is primarily a striker and a solid one at that, utilizing her muay thai skills both at range and particularly in the clinch, while also having a decent ground game.

Vieira can hold her own on the feet, but really it’s her well-rounded grappling ability, which encompasses wrestling, jiu-jitsu and judo, that is her strongest suit.

I can see Vieira getting the takedowns she needs in this fight, and it’s possible she can emerge with a submission finish, though I’ll take her to just frustrate her opponent on the mat to earn a decision victory.

Rosa has fallen into a pattern of ‘win one, lose one’ so far in his UFC run, putting together an indifferent 4-4 record, while Minner will be hoping he can avoid falling into the same trap after following up a submission loss with a submission win his first two Octagon encounters.

While he has less UFC fights than Rosa, the 30-year-old Minner is vastly experienced on the regional circuit and it’s his jiu-jitsu skills that have carried him to this point, having secured a whopping 22 finishes by submission. With that in mind though it’s concerning that his submission defense isn’t as strong as his offense, having also been tapped out eight times.

Rosa is also most effective on the mat and so he too will be hunting for submissions and is happy to work from his back, but he’s also comfortable mixing it up on the feet too with his karate-style striking – albeit without much in the way of finishing power.

Minner is not much of a striker, so I can see Rosa outlanding him in those exchanges, while there’s always a chance he can catch his opponent out with a submission on the mat too, and he’s better defensively in that regard, so I feel there’s more ways for him to emerge victorious here.

This is an interesting match-up, pitting one of the UFC’s most experienced veterans in the 43-year-old Oleinik against a notable up-and-comer in the 31-year-old Daukaus.

Daukaus has performed well in his three UFC fights to date, racking up two TKO’s and a clean KO, showing off very good hand speed for the weight class to go with his raw power, but we’ve yet to see how he’ll cope with more notable UFC competition.

As for the 73-fight veteran Oleinik, everyone knows how dangerous he has on the mat via submissions, but he’s not the most technical striker and the three losses he’s suffered in his last five outings have all been against heavy-handed strikers in Alistair Overeem, Walt Harris and most recently Derrick Lewis.

This feels like a fight in which both men have a good chance of finding a finish. Daukaus’ major speed advantage could well bring about a finish if this one stays standing, but I’m not convinced he can survive for long against ‘The Boa Constrictor’ if it goes to the mat.

I’m torn here, but Daukaus’ takedown defense is suspect, as is his cardio, so even without the submission Oleinik could potentially have an avenue to win by decision too, but I’ll take him to find an early tapout.

Prediction: Aleksei Oleinik to win by submission in Rd1.

Known as ‘Megatron’, Hawes has some serious power in his strikes, as demonstrated in his UFC debut last time out when he KO’d Jacob Malkoun in 18 seconds, and it’s a trait he’s shown numerous times on the regional circuit too.

Imavov may not hit as hard, but he has the technical edge on the feet here and moves well, while he’s also a submission threat on the mat and has good cardio.

Hawes prefers to strike, but he can wrestle too. The problem for the muscle-bound Hawes though is that his energy reserves can fade as the fight goes on and I think that could play into Imavov’s hands here, staying technical and avoiding the power shots early and then starting to pick apart his opponent in the second half of the bout to earn a decision victory.