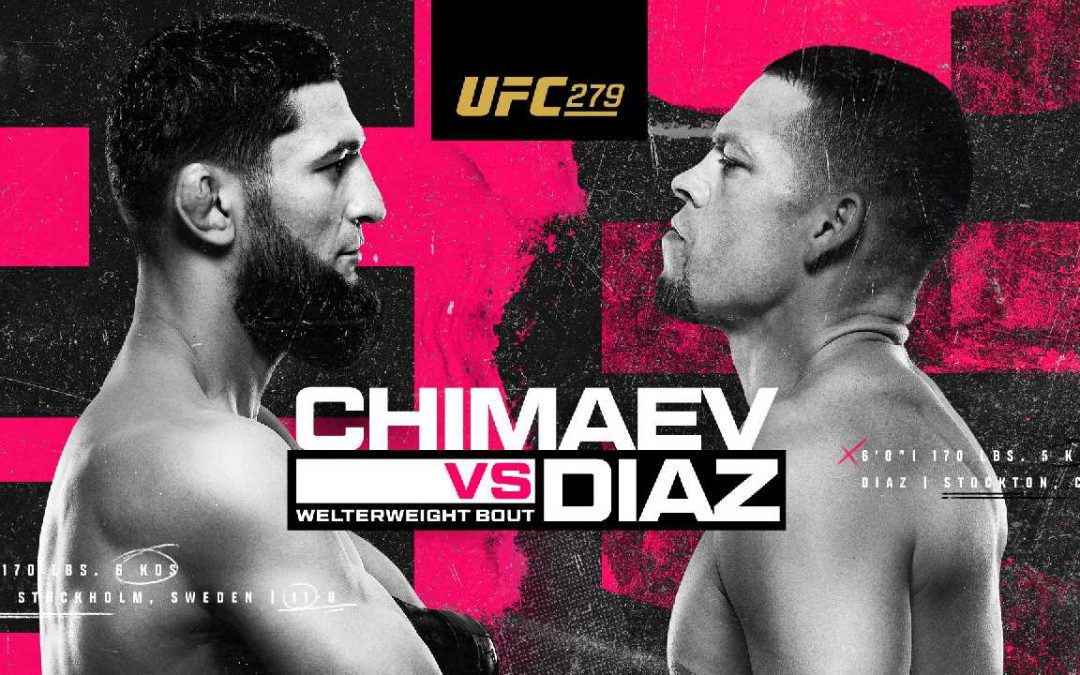 Undefeated in his 11 fight career to date and ranked No.3 in the division, a lot of eyebrows were raised when the UFC booked the 28-year-old Chimaev to fight the 37-year-old Diaz, who is currently unranked after losing three of his last four fights over a five year period and had made it abundantly clear that his next bout would be his last in the promotion.

As such it seemed to most observers that this was a calculated mismatch on the UFC’s part designed to hand Chimaev a high profile win while sending Diaz into free agency off a tough loss, and indeed Diaz is a massive underdog heading into Saturday night’s showdown.

There’s good reason for Chimaev being such a big favorite as he’s quickly established himself as a major player in the sport since joining the UFC in 2020, with a penchant for dominating opponents with his excellent wrestling ability, while also possessing knockout power on the feet, together with a natural killer instinct and unbreakable will. In addition to that he’s also a very big welterweight, and has actually fought very comfortably at middleweight twice during his UFC run so far.

On the other hand, Diaz is a former lightweight who has had an indifferent 4-5 during his stints at 170lbs in the UFC and is 20-13 overall in his career. Of course Diaz remains a good fighter in his own right with his high-volume boxing, crafty submission game and endless cardio, together with being as tough as nails. However, he’s at a serious size and power disadvantage here and though his best bet could be going for a submission, he’ll struggle to get the fight there unless it’s on Chimaev’s terms, and ‘Borz’ stifling top control will make it tough to find a finish from his back.

Chimaev looked less indestructible last time out in a hard-fought back-and-forth battle with Gilbert Burns and Diaz is no stranger to blowing a hole in the UFC’s best laid plans, having handed Conor McGregor his first UFC loss. Nevertheless, it certainly seems like a tall order for him here to replicate that here, particularly at this stage in his career in a division he’s already had mixed results in.

Based on his comments so far during fight week, even Diaz himself seems less than convinced that he’ll deliver an upset here and I think Chimaev’s size, power and aggression will take a toll on even Diaz’s sturdy chin, leading to a third round TKO finish.

Prediction: Khamzat Chimaev to win by TKO in Rd3.

After compiling an impressive 12-fight winning streak, Ferguson suffered a TKO loss to Justin Gaethje in 2020 and it’s been all downhill for him since then, having now lost four fights in a row. That’s prompted a move up to welterweight and he begins with a fight against Jingliang, who has gone 3-2 in his last five fights and is coming off a TKO victory against Muslim Salikhov in July.

It’s a curious choice from Ferguson as it doesn’t seem clear why moving up in weight will fix his problems. He did enter the UFC by winning a season of TUF at 170lbs, but the real issue now doesn’t seem to be his weight class, but rather that he’s just getting to that age and stage at 38-years-old where he’s no longer the fighter he once was. That’s particularly evident in terms of his durability as the only two losses by strikes of his career both came in the past few years, including that brutal front kick KO to Michael Chandler last time out.

To be fair to him Ferguson actually started the fight with Chandler brightly, still being a highly creative, unorthodox volume-based striker, but he’s not as fast as he once was, and the toughness that’s been a hallmark of his career and enabled him to walk through an ungodly amount of punishment at times, has inevitably caught up with him in the end, so he doesn’t wear or withstand the damage as well as he once did. Meanwhile, though he’s also a crafty submission grappler, fighters like Charles Oliveira and Beneil Dariush have shown in recent times that he can be controlled on the mat.

As noted earlier, these are the kind of concerns that a move up in weight can’t fix, and indeed may only magnify. And Jingliang is by no means an easy first test in the division as he’s a heavy-handed striker with genuine KO power in his strikes and a strong chin to back it up, while he’s also a solid wrestler too.

Ferguson is still the more skilled stand-up technician here and has a 4″ reach advantage too, but I think he’ll have a hard time landing strikes that’ll really stop Jingliang in his tracks, with ‘The Leech’ continuing to press forward and land his own heavier blows to seal a second round TKO finish.

Prediction: Li Jingliang to win by TKO in Rd2.

This fight was rather hastily arranged and as such it’s actually taking place at a 180lb catchweight at a time when Holland is back on-form with two wins in a row, while Rodriguez is on a three-fight winning streak.

The extra weight would seem to favor Holland more here. After all he is a former long-time middleweight who showed plenty of finishing ability there and only seemed to drop down due to being outwrestled by some of the divisions other leading contenders. Rodriguez doesn’t have that kind of wrestling ability, and though he actually made his debut at 185lbs, since then he’s been competing at 170lbs and even had a bout at lightweight. Nevertheless, it should be noted that it was actually Rodriguez who requested this catchweight,

Continuing to underline Holland’s size advantage, he’s 2″ taller and has a whopping 7″ in reach over D-Rod here, and that’s something he takes full advantage of with his long, straight punches from range, which land with both accuracy and authority, while kicks, knees and elbows are all on the menu too from the 29-year-old.

Rodriguez is a good striker in his own right though, being an assured, durable boxer who carries solid power in his fists and will maintain a good pace as his strikes gradually take a toll on his opponents.  He’s been out for just over a year due to a hand injury though, which has taken some of the wind out of his sails after having notched up three wins in six months last year.

In the end I just feel Holland’s hard-hitting striking from range is going to be a problem for Rodriguez, though he may just be hard-headed enough to keep the action going for the full three rounds.

The No.4 ranked women’s bantamweight, Aldana is coming off a nice TKO win over Yana Kunitskaya over a year ago, while the 10th placed Chiasson edged to a split-decision win over Norma Dumont back in May.

Aldana has very solid boxing fundamentals and will be the more refined striker of the two here while also carrying a genuine finishing threat with it. That’s worth underlining as unusually for the women’s 135lb ranks, Aldana has actually won 7 of her 13 fights via strikes and that’s included a first round KO of fellow top contender Ketlen Vieira and that TKO stoppage of Kunitskaya, also inside the opening round.

Chiasson will have a 4″ reach advantage here, but she’s not as technically assured as Aldana in the striking department and will likely struggle to use that reach effectively as she’s the kind of battling fighter who seems to thrive more in close quarter exchanges and in the clinch.

I think Aldana’s boxing skill and punching power will throw Chiasson off her game though, stopping her from getting up close and personal, paving the way for a win on points.

Two light-heavyweights who are struggling to stay in the win column here, with Walker having started his UFC career brightly, but now in a tough spot with four losses from his last five fights, while Cutelaba has a win and a draw to show from his last five bouts.

Traditionally these two have been all-action fighters right from the opening bell. However, though Walker’s aggressive, unpredictable striking saw him notch up some big highlight-reel finishes earlier in his UFC run, he then switched camps to SBG in Ireland, where he has a times looked much more cautious while looking to fight on the outside.

There’s good reason for that as he is a very large 205lb’er who will enjoy a 5″ height and 5″ reach advantage here, but so far fighting in a more measured, restrained manner doesn’t appear to have been a comfortable transition for him, and meanwhile there’s now serious questions regarding the quality of his chin, with his current losing run being bookended by a 1st round TKO loss to Corey Anderson in 2019 and a particularly nasty 1st round KO loss to Jamahal Hill in February.

Cutelaba has always had a kill-or-be-killed fighting style, and unlike Walker he’s shown little interest in changing that despite it not really working out well for him in recent years.

Cutelaba is a fast starter and he swings for the fences, while he’s equally aggressive when it comes to going for takedowns and then working for ground-and-pound and submissions. When things go his way he has shown a good record for finishing opponents wherever the fight goes, but he’s also been stopped three times in the 1st round during the past few years and if he doesn’t get an early finish with his energetic, aggressive approach then he tends to run out of steam in the rounds that follow.

Despite all his issues, Walker is still a dangerous fighter with heavy kicks and punches and given Cutelaba’s defense is weak there will certainly be opportunities for Walker here. However, I think Cutelaba’s constantly wading forward with power punches and the threat of a takedown will put the bigger man uncomfortably on the back foot and I don’t have confidence that his chin will stand up well when one of Cutelaba’s winging strikes lands, leading to a first round TKO win for ‘The Hulk’.

Prediction: Ion Cutelaba to win by TKO in Rd1.