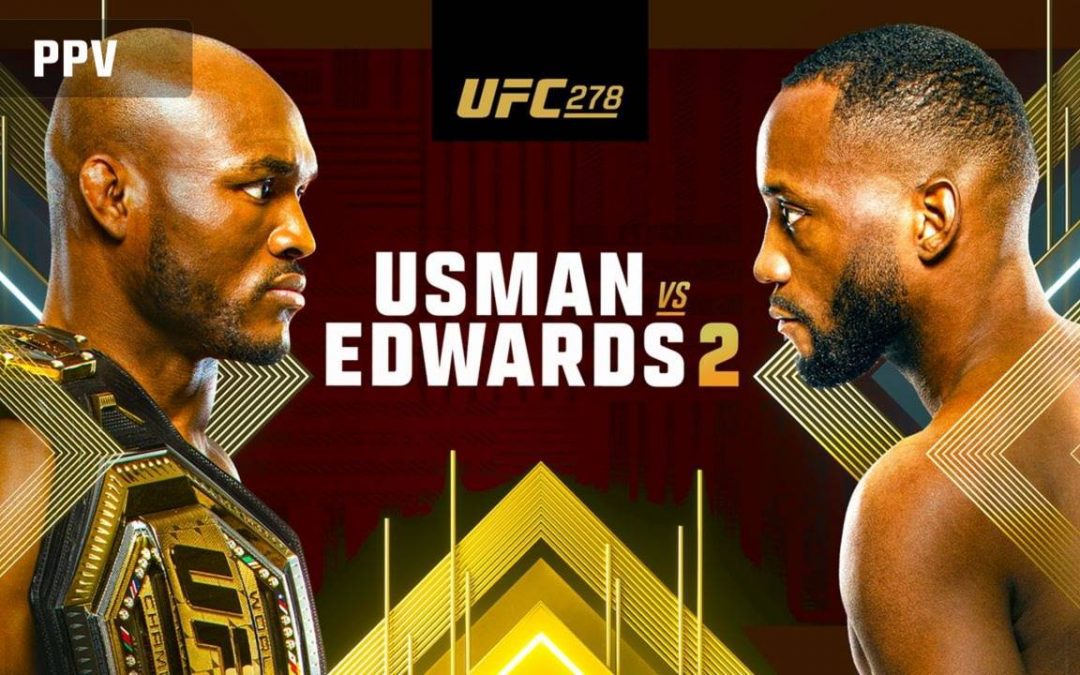 Usman is on the hunt for his sixth successful welterweight title defense on Saturday night as he goes up against Edwards, who is on a 10-fight unbeaten stretch that dates all the back to 2015, when he lost by unanimous decision to the current champ.

In their original encounter Usman was able to use his high-level wrestling ability to get the better of Edwards. In the years since, Edwards has frequently used his own wrestling skills to get the upper-hand over his opponents, and hasn’t been afraid to grind out a decision victory even though he is a very technically sound striker.

Meanwhile, Usman has made major improvements to his own striking ability over time and is now far more comfortable and dangerous in that regard than he was back in 2015. As such there’s now no real sign of a weakness in the still-undefeated 35-year-old’s game, with dominant wrestling, off-the-charts cardio and a champions mind-set, together with his significantly bolstered striking having led to him now being discussed as being one of the sports all-time greats.

With that in mind it does feel like it’s going to be a tall order for Edwards here, as though he’s very well-rounded in his own right, the striking advantage he may have had earlier in their careers has largely evaporated now. Perhaps he does still have a slight technical edge over Usman, but he’s not a big finisher and has a fairly cautious style that won’t put Usman outside his comfort zone.

Meanwhile, Usman will still be able to boss the wrestling action when he needs to, and I suspect he will make frequent use of that on his way to another unanimous decision victory.

Following a nightmare spell in which he lost three out of four fights by knockout, former middleweight champion Rockhold stepped away from the sport for three years, but he now returns to action in a major fight against former title challenger Costa, who is coming off back-to-back losses.

You have to respect Rockhold’s courage for taking this fight against one of the division’s most deadly and physically imposing strikers, but given how bad his chin looked in his previous fights it does seem like an exceptionally risky move on his part.

At his best, Rockhold certainly is a high-level talent though, with very good athleticism, and solid striking from range, with his kicking game in particular being an asset, though he’ll also enjoy a sizeable 5″ reach advantage here too. However, while he doesn’t use it nearly as often as he should, he is actually an excellent grappler with strong control and a dangerous submission game.

Rockhold certainly isn’t at his best at this stage in his career though. For one thing he’s now 37, so of course he’s past his prime, and being out of action for three years doesn’t help. And he’s always had a bad habit of leaving his chin exposed at times, and it remains to be seen whether he can correct that successfully at this late stage in his career.

The 31-year-old Costa has had his own issues of course. He looked bad in his title fight against Israel Adesanya, and then there was the whole weight-fail fiasco prior to his fight with Marvin Vettori last time out that forced the fight to be contested at 205lbs on short notice. However, while that incident set the alarm bells ringing as to Costa’s mental and physical state going into that bout, he actually put in a very respectable performance, despite losing out on the scorecards, showing good cardio while still being a clear threat in the striking exchanges.

On top of that, Costa seems in better shape ahead of this fight and also seems to be more focused mentally too. As such, if Rockhold thinks that Costa has lost his edge and is no longer the fighter he one was then that’d be a big miscalculation on his part.

Perhaps Rockhold will come in with a grappling-heavy game-plan that can push the fight in his favor, but it’ll be easier said than done to get Costa down and I’m just not convinced at all that his chin can withstand the kind of power that the Brazilian possesses for long, so I think an early knockout is a real possibility here.

Prediction: Paolo Costa to win by KO in Rd1.

Currently on a three-fight winning streak, Aldo has dropped hints that he might retire in the not so distant future. Before that he is planning to be crowned a champion again though, and to do so he’ll have to get past the No.6 ranked Dvalishvili, who is currently riding a seven-fight unbeaten run in the promotion.

There’s a big clash of styles here. Aldo will want to keep this one standing where he can utilize his tried-and-tested technical boxing ability, punctuated by the occasional thunderous leg kick and backed up by tremendous takedown defense, to command the striking battle from start to finish.

Meanwhile, Dvalishvili is fairly awkward on the feet and so will be throwing everything he’s got into takedown attempts, and its an area in which he excels, having both the technique and cardio to continually push for and land takedowns for 15 minutes and beyond.

I’m intrigued to see how well Aldo can fend off those attempts as he does have an incredible knack for staying on his feet when it looks like he shouldn’t be able to, but even so, I think Dvalishvili’s chain-wrestling will be very hard to deal with and the pace he’ll push in doing so will wear on Aldo, whose had cardio concerns in the past. So I’m taking Dvalishvili to wrestle his way to a win by decision here.

Tybura’s five-fight winning streak came to an end last time out with a decision loss to Alexander Volkov and now he takes on an undefeated fighter in Romanov, who has won all five of his fights in the UFC so far, extending his overall record to 16-0.

As impressive as Romanov’s record looks, he hasn’t faced much in the way of tough opposition up until this point, so fighting Tybura is certainly a step-up as he’s a fighter with a wealth of experience who is also fairly well-rounded in all areas of the game.

That being said, wrestling has often been an important part of Tybura’s strategy, and that will be a struggle this time around as Romanov is a dominant force in that regard, with the skill and the strength both in the clinch and on the mat to control his opponents, backed up by a solid submission game and good ground-and-pound.

Romanov is less of a force on the feet though, so Tybura will be looking to make the most of his 1″ height and 3″ reach advantage with his kickboxing from range.

Tybura’s not a particularly potent striker though and he’s not got much in the way of speed, so I think he’ll find it difficult to contain Romanov, who will be able to grind out a decision win from the clinch and on the mat here.

Pedro claimed a KO victory last time out, but had lost two fights prior to that, while Hunsucker has lost both of his UFC fights so far via first round strikes and now has a 7-5 career record overall.

Hunsucker drops down to light-heavyweight for this bout as he desperately tries to reverse his fortunes. Even so, he’ll actually still be at a 1″ height and 4″ reach disadvantage against Pedro here. Hunsucker will look to slug it out on the feet with hard punches and low kicks, but he’s not the most technical striker. It’s also worth noting that, win or lose, he’s never made it beyond the first round in his career, and all five of his losses have come via strikes in those opening five minutes.

Truth be told Pedro just seems to hold all the aces here. He’s the more technical striker, will be able to strike effectively from range with good kicks in particular, while on the mat he also has the upper-hand with solid Brazilian Jiu-Jitsu.

So, this seems like very favorable matchmaking from Pedro’s perspective and I seem him securing a first round TKO finish here.

Prediction: Tyson Pedro to win by TKO in Rd1.