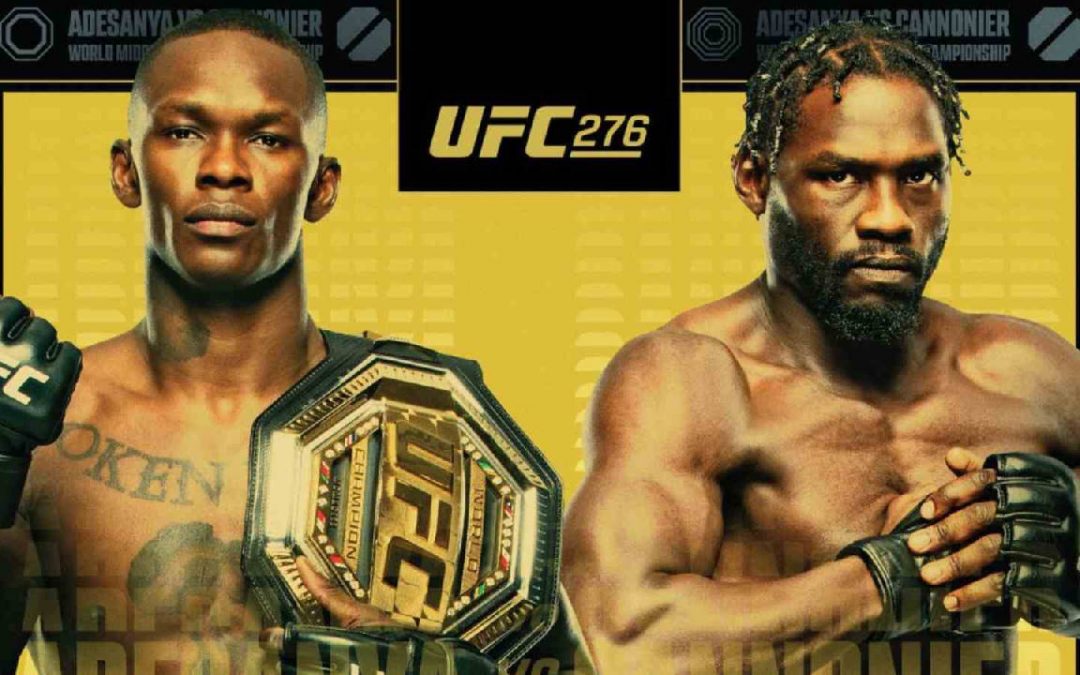 Adesanya seeks the fifth defense of his middleweight title on Saturday night when he goes up against Cannonier, who has won five of his last six fights since joining the division.

Cannonier started of his career as a heavyweight, but didn’t really find his groove until he gradually dropped down to being a powerfully built middleweight, where four of his five wins have comes via strikes. Despite that finishing power, Cannonier is a patient striker and will utilize heavy leg kicks to compliment his punching prowess.

Cannonier’s technical ability has clearly improved over the years, but in Adesanya he’s facing the gold-standard in that regard, with the former vastly experienced kickboxer operating at an elite-level on the feet.

Adesanya is a fast, agile, dynamic striker who will enjoy a 5″ height and 2.5″ reach advantage here, and though he might not hit quite as hard as Cannonier, what really sets him even further apart from his contemporaries is his extremely high fight IQ and composure. He manages distance perfectly and is very shrewd defensively, cleverly lures opponents into traps, is razor-sharp on the counter and has excellent shot-selection in the heat of the moment.

So, Cannonier always has a chance thanks to his big power and solid striking ability, but I feel Adesanya will just be too good for him and will also be the fresher fighter in the later rounds.

Adesanya is definitely more vulnerable on the mat and Cannonier may try to use his wrestling and heavy ground-and-pound to try and exploit that, but I don’t think he’s going to be good enough to coral the champion into those positions to make it pay off and Adesanya will increasingly comfortably pick him apart to a win the on the scorecards.

Featherweight champion Volkanovski comes into this fight having won all 11 of his UFC fights to date, including two decision victories over Holloway, the former divisional kingpin, who has racked up two more convincing wins since to set up this trilogy encounter.

Both of their fights so far have been highly competitive, and in fact there’s a very solid case to be made that Holloway won the rematch, though the final result was a split-decision loss. Each has excelled since, with Holloway most notably putting on an absolute striking clinic against Calvin Kattar, while Volkanovski was utterly dominant in his latest fourth round TKO win over The Korean Zombie.

So, this third fight has all the making of another closely fought technical masterclass. I’ve always felt that Holloway is the more gifted striker of the two with a more wide-ranging, dynamic arsenal of weapons at his disposal, and he did show that off last time around when he knocked down the champ in both the first and second rounds with his pinpoint accuracy and clever shot selection.

That being said, Volkanovski might not be as slick and flashy, but he’s proven already that his more compact, tried-and-tested selection of techniques, including frequent use of the leg kick, can be highly effective against Holloway, and it does feel as if he’s continued to improve since their last outing.

On top of that, Volkanovski is a very good wrestler and I think we could see him utilize that even more in this fight, knowing that not only can he have some success with it, but also that it will make Holloway more cautious with his striking and will help wear on his gas tank.

I’m going back and forth on my pick here, but in the end I’ll take Volkanovski to use his full MMA game on the feet and on the mat to gain a slight edge over Holloway, particularly in the later rounds, to claim another narrow decision victory.

At one stage during his six-fight winning streak the now 4th ranked middleweight Strickland looked like a potential candidate for title contention, but his outspoken and often highly controversial views outside the cage, together with adopting a surprisingly cautious, risk-adverse strategy during a split-decision win over Jack Hermansson last time out, hasn’t played well with the UFC brass.

As such, rather than fighting another leading contender, Strickland has now been paired up with an unranked but still dangerous opponent in Pereira, who has gained notoriety from the fact that he holds two wins over Israel Adesanya in 2016 and 2017 during their kickboxing days, including one via knockout.

Pereira was slower than Adesanya to fully commit to mixed martial arts, instead continuing to compete for Glory kickboxing, where he’d become a double-champ, while only dabbling in this sport on the side, but now he’s with the UFC and has won two fights in a row, taking his overall MMA record to 5-1.

As you would expect, Pereira’s striking is at a very high level technically with multiple finishing weapons, while he’s also a big middleweight, having a 3″ height and 4″ reach advantage over Strickland here. That being said, a week shy of his 35th birthday he’s stepping into the big leagues of this sport late in his career and as such doesn’t have the most well-rounded skill-set beyond that extensive kickboxing background, so he has to lean heavily on his takedown defense.

Ideally Strickland likes to keep the fight standing too and has proven to be highly capable in that regard, looking to bully opponents with his high pace and clean, technical striking, and while he’s not wielding much in the way of pure knockout power, he hits hard enough to earn respect.

However, Strickland is also a good wrestler too when he chooses to use it and is just the more complete fighter overall here. Given that he’s so close to fighting for a title I don’t imagine he’ll want to risk slipping on a potential banana-skin like Pereira and so will take this fight to the mat at the earliest sign it’s not going his way on the feet. As such, I’m taking him to secure a second round finish via either ground-and-pound or submission.

Prediction: Sean Strickland to win by TKO in Rd2.

This fight was moved up to the main card on short-notice after Miesha Tate vs. Lauren Murphy fell through and sees Lawler looking to build on a win over Nick Diaz last time out after having lost four fights in a row prior to that, while Barberena recently signed a new deal following back-to-back victories.

That win over Diaz was a welcome return to form for Lawler, who had looked somewhat jaded in his last few fights before that, even being surprisingly gun-shy at times. Perhaps the fact he had been going up against a series of strong wrestlers had made him more hesitant to commit to his strikes, or maybe he’d just lost some of the hunger he had during his title run.

Whatever the case, he certainly looked more like his old self last time out, though the fact it came against a past-his-prime and ring-rusty Diaz does still leave some question marks.

Barberena doesn’t have Diaz name value, but he will bring the kind of stand-up battle that Lawler traditionally enjoys. Barberena fights at a high pace, has solid power, is very durable and relishes a good brawl, though he does have some technical ability to back it up.

Lawler is the more technical striker of the two though as well as carrying vicious knockout power. He operates better than most in the pocket with his boxing as he is still mindful of his defense while throwing heavy leather.

I feel a prime Lawler would win this fight comfortably, but at 40-years-old it does leave pause for thought and if he’s in any way hesitant to get stuck in here he could be punished by Barberena’s pace, aggression and fighting spirit. Nevertheless, when fists start flying I still feel that Lawler’s heavy hands will lead him to land the more telling blows and take some of the wind out of his opponent’s sails, though he still might find it difficult to stop him inside the distance.

O’Malley is one of the sport’s biggest rising stars at the moment, coming in off three wins via strikes in a row, taking his overall UFC record to 7-1, while Munhoz has gone up against a who’s who of the bantamweight ranks in his last five fights and only come away with one victory.

To his credit, while the 35-year-old Munhoz came up empty-handed against Aljamain Sterling, Frankie Edgar, Jose Aldo and most recently Dominick Cruz during his losing slump, he still took them all to the scorecards and three of them ended up earning ‘Fight Of The Night’ honors, so he’s still got a lot to offer.

Munhoz is a good striker who stays active offensively and makes frequent use of leg kicks, while on the mat his Brazilian Jiu-Jitsu is a key weapon for him. It’s also worth noting that he’s very durable, as evidenced by having yet to be finished in his 27-fight career, but nevertheless he is there to be hit a lot.

O’Malley would certainly like to be the first one to stop him, and he has the kind of striking prowess that makes that a possibility, with both his fast, well-timed punches and kicks being proven fight-enders. He also has a big size advantage here, being 5″ taller with a huge 7″ reach advantage, and he works very well from range.

So, while Munhoz remains much better than his recent record would suggest, I still think this is yet another very tricky match-up for him in which the considerably quicker O’Malley will control the distance with his long, accurate and more damaging strikes, and that will set him up for a big finish before the final bell.

Prediction: Sean O’Malley to win by TKO in Rd3.