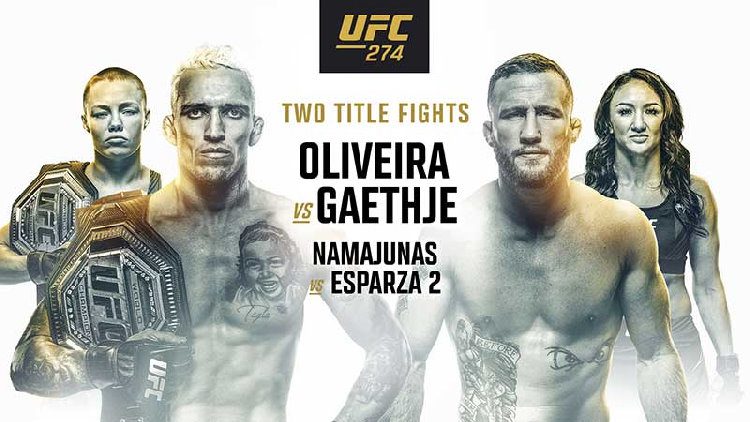 Lightweight champion Oliveira heads into this fight on a 10-fight winning streak, including no less than 9 finishes and one successful title defense, while Gaethje came up short in his last bid to win the title against Khabib Nurmagomedov in 2020, but aside from that has won his last five fights.

These really are two of the deadliest lightweights ever put in the Octagon together, with Oliveira having amassed 29 finishes from 32 career fights, while Gaethje has 20 victories inside the distance from 23 wins overall.

The way they get the job done differs significantly however.  Oliveira is certainly the more versatile of the two, and holds a massive advantage in the grappling department as the UFC’s current submission king, holding the all-time record for submissions (15).

That makes going to the mat effectively a no-go zone for Gaethje, who looked very uncomfortable off his back against Khabib.  Oliveira may not have the former champ’s dominant wrestling chops, but his constant hunt for submissions and expert scrambling ability would be the stuff of nightmares for ‘The Highlight’.

Instead, Gaethje will be seeking to use his own wrestling ability defensively to try to keep this standing, where he excels.  Gaethje is somewhat of a brawler in spirit, but he backs it up with technical ability, and while he’d be only to happy to use his thunderous punching power to end the fight quickly, he’ll also invest in brutal leg kicks that can pay dividends later in the fight.

Gaethje’s striking rate is formidable, with all but one of his 20 career finishes being via strikes, but Oliveira’s own striking has improved significantly over the years and so now he’s a finishing threat standing too and has a versatile offensive output.

Oliveira can be hurt though, we’ve seen that in recent fights, and though he has shown good powers of recovery, if it turns into a straight-up fire-fight then Gaethje’s granite chin and punching power seem like the better bet.

However, Oliveira’s ability to be somewhat competitive on the feet is a big factor when you also take into account his dominant ground skills, and he is excellent at creating the chaos needed to get the fight to the mat and then quickly capitalizing on that, so I’ll take him to win via submission in the second round.

Prediction: Charles Oliveira to win by submission in Rd2.

It was well over seven years ago that these two fought in the final of TUF 20 to establish the UFC’s first ever strawweight champion, and on that occasion Esparza used her wrestling to get the upperhand and find a third round submission finish.

It always felt like there was more to come from a young ‘Thug’ Rose who only had four pro-fights to her name, and sure enough in the years since she’s evolved her game to become one of the leading lights in female MMA, winning the 115lb title on two separate occasions.

Esparza hasn’t had the same level of fanfare, losing the title in her next fight and then going on to experience a mixed run of 3-3 in the couple of years that followed, but she’s since rebounded with a five-fight winning streak to get back in line for a shot at the belt.

Esparza’s game hasn’t really evolved much over the years though. She still remains a strong wrestler, but her striking game is merely functional and she hasn’t had a submission finish in the many years since their last encounter.

On the other hand Namajunas ability has gone through the roof. She’s far less reckless than she was early in her career and now brings a highly technical striking game and slick movement to bear alongside her dangerous submission ability, excellent cardio and smart game-planning.

Esparza’s wrestling strength always gives her a chance, but I think she’s going to get picked apart on the feet from range by the faster, crisper, more skilled and more elusive Namajunas on her way to a third round TKO finish.

Prediction: Rose Namajunas to win by TKO in Rd3.

In many ways this is a mouth-watering match-up as these are two all-action lightweight stars who leave it all in the Octagon, but they’ve both taken an alarming amount of punishment in recent bouts.

It’s in both fighter’s make-up to be offensively-minded and go all-out for the finish.  Chandler likes to push the pace and carries big power in his hands, and he’ll let them go early and often.

He’s all too willing to eat strikes in return though, and while that made for an incredible fight with Justin Gaethje last time out that he lost on the scorecards, it was the kind of slug-fest that takes a toll on you, and it’s far from the first the 36-year-old’s been involved in.

The 38-year-old Ferguson is in the same boat though.  He might not have the same one-punch power as Chandler, but he is a Swiss-army knife of striking techniques and his creative offense and unpredictable moment combined with a relentless pace have wilted many an opponent.

Ferguson has also leaned on the fact that he’s incredibly tough, but in recent fights there’s started to become major concerns that he’s perhaps too tough for his own good as he’s showing real signs of being past his prime and is being caught clean too often.

Of course both men are more than just stand-up fighters, with Chandler having a strong wrestling game, heavy ground-and-pound and can work submissions too, while Ferguson also has a wrestling background to go along with very good scrambling and submission ability.

Ferguson has been getting controlled in recent fights on the mat though, and that just adds to the growing sense that after his many wars over the years he’s now on the decline. Chandler has also taken more damage than he should, but it still feels like he’s a bit fresher and I think he’ll come out guns-blazing and secure a second round TKO stoppage.

Prediction: Michael Chandler to win by TKO in Rd2.

These two actually fought once before, all the way back in 2014, where OSP emerged victorious in just 34 seconds via first round KO.

Fast forward to the present day and the two veterans are at the tail-end of their career’s, with the 40-year-old ‘Shogun’ returning a year-and-half since a TKO loss to Paul Craig that ended a three-fight unbeaten run, while the 39-year-old OSP is coming off TKO and KO losses.

In all honesty it’s tough to watch ‘Shogun’ fight these days as he’s a shadow of the fighter he once was, and it could be argued that it’s now been a very long time since we’ve really seen him perform at anything close to his best.

Injuries have no doubt taken a toll on him, but age is also now having an impact too and so he’s not as dangerous and explosive on the feet and his tap-out due to strikes last time out suggests that not only his chin, but also his mental resolve has also seen better days.

To be fair, OSP isn’t exactly lighting up the Octagon either and there’s now real concerns about his chin too.  However, Saint Preux has always been a fighter who failed to live up to his potential, but even at 39 it still feels like he can draw upon his athletic ability to deliver strikes with speed and power at times, though he doesn’t use that nearly enough.

OSP is also crafty on the mat with his submissions, so it feels like at this stage in their careers he still has a bit more left in the tank than Shogun and I’ll take him to claim a second round TKO victory.

Prediction: Ovince Saint Preux to win by TKO in Rd2.

Lauzon looked like he was bowing out of the sport back in 2019 after breaking a three-fight losing streak with a TKO win over Jonathan Pearce, but he’s been lured back for a big fight with Cerrone, who is in dire need of a win after going six fights without a win.

Worse still, four of those losses came by TKO, and that’s a big concern that even the care-free 39-year-old has had to sit up and take notice of, with talk of retirement no longer being off-limits.

Despite his failing punch-resistence, Cerrone does remain a serious threat offensively though, with his 3″ height and 2″ reach advantage here enabling him to launch hard-hitting, technical punches and kicks from range, while there’s always a well-timed knee waiting to greet opponent’s stepping into range in pursuit of a takedown.

The 37-year-old Lauzon also suffered a couple of TKO losses not long before his hiatus from the sport and didn’t seem to enjoy the fire-fights he would have once thrived in.  As such, while he was always a solid enough boxer, in later years he’s retreat into a very defensive shell all-to often when coming under sustained attack.

Lauzon was always very crafty on the mat though and may well look to get the fight there in the hope of finding a submission, although Cerrone also has a strong finishing rate on the mat and has only been tapped out once in his long career.

In the end I feel this fight favors Cerrone as he has the better striking and Lauzon doesn’t have the heaviest hands, while ‘Cowboy’ is also capable of handling himself on the mat for the most part, so I’ll take him to cause Lauzon problems on the feet and win by TKO in the second round.

Prediction: Donald Cerrone to win by TKO in Rd2.