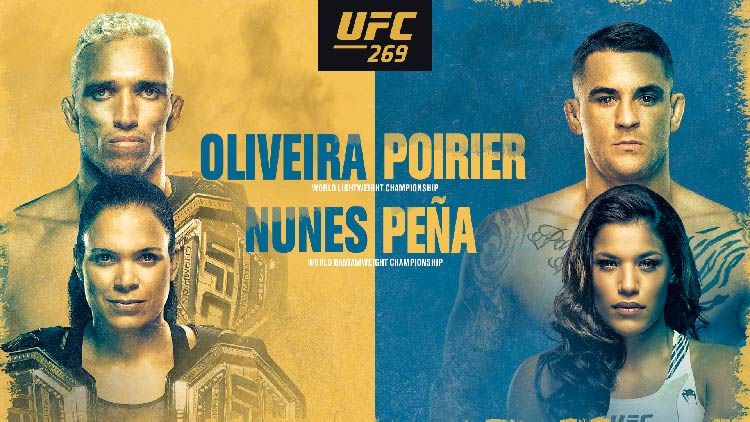 In his first lightweight title defense Oliveira will be looking to win his 10th fight in a row, in addition to adding to his remarkable tally of records, which includes holding the most finishes in UFC history (17), the most submission wins in UFC history (14) and most Performance Of The Night awards (11).

His opponent Poirier is also a formidable foe though and has become a major star after securing back-to-back victories over Conor McGregor and in his last 10 fights has also beaten the likes of Max Holloway, Justin Gaethje, Dan Hooker, Eddie Alvarez and Anthony Pettis, with his only loss during that period coming in a title fight with Khabib Nurmagomedov in 2019.

These are two great representatives of the sport as they are talented in many areas, though they do still have their strong suits. In Poirier’s case that’s his stand-up skills as he’s adept at offering up a high-volume offensive striking style and is particularly effective with his boxing ability, carrying more power in his punches than Oliveira and also having good cardio over five rounds.

While he’s best known for his grappling, Oliveira is also a talented striker though and has improved upon that over the years to become a significant threat with his muay thai. His dynamic creativity will be an asset, but he’s generally not as active as Poirier offensively and his chin is a bit of a concern.

That being said, on the mat Oliveira is an absolute assassin who is hardwired to hunt for submission finishes and is exceptional at doing so, whether on top or off his back. Poirier is a very capable grappler in his own right and transitions well between all aspects of MMA, but he will be very wary about mixing things up too much against Oliveira here given the risks attached to tangling with him for extended periods on the mat.

So, this is shaping up to a fantastic all-action fight that both men have plenty of opportunities to emerge victorious from. In the end I’m leaning more towards Poirier here though as I feel he’ll be the more effective striker and is well-rounded enough to largely keep this a stand-up battle and survive some brief scares on the mat if he absolutely has to. He’s the more compact, efficient striker and I can see him finding openings to hurt Oliveira and then finish him with a flurry of strikes in the second round.

Prediction: Dustin Poirier to win by TKO in Rd2.

Whether it’s at bantamweight or featherweight, Nunes has ruled the roost with an iron fist to the extent that it’s become hard to find legitimate challenges left for her in either weight class.

On paper Pena doesn’t quite fit the bill as a title contender yet as she’s only 2-2 in her last four Octagon outings, including submission losses to Valentina Shevchenko (prior to her dominant reign as strawweight champion) and Germaine de Randamie (after she was briefly the featherweight champ), but the former TUF winner does also hold notable wins over the likes of former flyweight champion Nicco Montano and former title challengers in Sara McMann, Cat Zingano and Jessica Eye.

Pena is a strong-willed fighter whose best asset is her offensive grappling, so she’ll be looking to bully Nunes by getting her down to the mat early and often and control her there while hunting for submissions.

That’ll be easier said than done though as Nunes is the faster, more mobile fighter, possesses strong takedown defense and has a massive striking advantage that will act both as a deterrent to make Pena wary of closing the distance, but will also quickly punish her if she fails to land her takedown attempts.

Worse still for Pena, even if she does get Nunes to the mat she’s still in danger as Nunes finishing instincts are just as sharp on the mat. Pena’s defense on the mat is a real question mark, particularly since even a striker like de Randamie was able to secure her first ever submission finish against her, so Nunes will rightly fancy her chances of doing the same, whether off her back or if she’s the one who is on top.

Anything can happen in this sport but it feels like Nunes holds all the aces here and I think she’ll light up Pena on the feet early to claim a first round TKO victory.

Prediction: Amanda Nunes to win by TKO in Rd1.

Not so long ago Neal was on a seven-fight winning streak, but he’s faltered this year, suffering two losses in a row against Stephen Thompson and Neil Magny. Meanwhile, Ponzinibbio returned to action after over a two-year injury layoff in January and suffered a KO loss to Li Jingliang which broke his own seven-fight unbeaten run, but has since rebounded with a unanimous decision win over Miguel Baeza.

This is all set to be a competitive striking battle with Neal seeking to apply pressure on the feet and backing that up with big power in his hands, while Ponzinibbio will meet him half-way as he also stays very active offensively and has finished many fights with his fists over the years.

Neal has a lot of raw horsepower, but I feel Ponzinibbio’s the more refined striker here and pieces together his combinations more effectively in the heat of the battle, which could be a key factor.

If there is any time spent on the mat then Ponzinibbio also holds the edge in that regard too, but I think his swarming attacks on the feet will throw Neal off his own game, leading him to a decision victory.

When Garbrandt put on a stellar performance to dethrone Dominick Cruz back in 2016 few would have predicted that he would go on to lose four of his next five fights, including two KO defeats and a TKO for good measure.

Now he’s looking to get back on track by dropping down to flyweight, where he’ll come up against Kara-France, who has gone 2-2 in his last four outings, including a KO victory over Rogerio Bontorin in March.

At his best Garbrandt is a very dangerous and skilled offensive boxer with thunderous knockout power for his size and great speed to go along with it. However, his chin has since become a major issue for him, not helped by his tendency to get overly aggressive in pursuit of a big finish. The fact that he’s now dropping down a weight class does also leave further question marks about how his body and chin will respond to what may well prove to be a challenging cut.

Like Garbrandt, Kara-France is also a talented striker, though despite his big finish last time out, he’s not as heavy-handed as his opponent here. His strikes certainly take a toll though and there’s plenty of them as he adopts a volume approach and will mix in kicks along with his punches more than Garbrandt. It’s also worth mentioning a curious stat that kara-France gives up 4″ in height to Garbrandt here, yet actually has a 3.5″ reach advantage that almost cancels it out.

I’m always reluctant to pick against Garbrandt as he’s a terrific talent who seemed destined to be at the top for a longer than he has been so far, but between big knockouts losses and injuries he’s taken a lot of punishment for his age and I think the weight cut might hinder more than it helps him. Against a very good striker in his own right like Kara-France I think that even if he’s gaining the upperhand there’s a real chance Garbrandt could get caught and finished inside of the first two rounds.

Prediction: Kai Kara-France to win by TKO in Rd2.

Paiva comes into this fight on a three-fight winning streak, while O’Malley has back-to-back wins and is one of the bantamweight division’s most hyped rising stars.

There’s good reason for that as O’Malley has proven to be a big-time finisher so far in his UFC run, with the last four times he’s had his hand raised in the Octagon coming via either knockout or TKO, leaving him with 11 T(KO) wins from 15 career victories.

O’Malley’s speed, timing and accuracy all play a part in producing that kind of stopping power, although it should also be noted that he’s big for the weight class and will have a 3″ height and 2.5″ reach advantage over his opponent on Saturday night.

Paiva is a solid technical striker in his own right, but he’s not as potent as ‘Sugar’ Sean, with only four stoppage wins due to strikes from 21 career victories and so he may well have to go the long route to have a chance of victory here.

I don’t see that happening though and feel that O’Malley’s size and power advantage, together with his knack for picking out the right punch at the right time will lead to a second round TKO stoppage here.

Prediction: Sean O’Malley to win by TKO in Rd2.