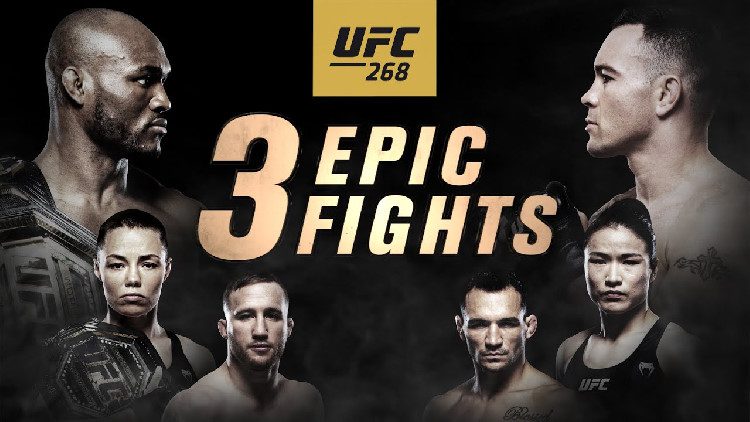 The first clash between these two was a mouth-watering match-up on paper and it delivered on the night too with a high-octane back-and-forth battle, though the victor was not in doubt, with Usman managing to break Covington’s jaw before eventually sealing the deal in the fifth by TKO.

That was Usman’s first successful title defense and confirmed him as the cream of the crop at 170lbs, but after a further three wins since then against Jorge Masvidal (twice) and Gilbert Burns the talk has now shifted to him now potentially being one of the all-time greats.

Meanwhile, Covington has been far less active, having only stepped into the Octagon once in the past two years, notching up a fifth round TKO win over jaded former champ Tyron Woodley last September.

So has anything really changed to suggest the outcome will be different this time out? From Covington’s perspective it doesn’t seem so. He remains the same high-level fighter he was with very strong wrestling and excellent cardio, together with a solid, if not particularly hard-hitting volume-based striking style on the feet, but there’s no sign of marked improvement to his all-round game..

Still, that’s a set of skills that’s already proven to be a huge headache for almost everybody else in the division, but not Usman as he too excels in the wrestling department and has off the charts cardio.

However, Usman has already proven once that he’s the better striker of the two, and he’s unquestionably demonstrated further improvement in his stand-up ability since then and is now more of a technician and finishing threat than he’s ever been before.

That’s not good news for Covington, and I think he will again be forced to fight a stand-up battle where he is outgunned, with Usman being able to match his output, but do so with more power, craft and conviction to secure a fourth round TKO stoppage.

Prediction: Kamaru Usman to win by TKO in Rd4.

Another major title rematch here, with Namajunas having stunned Weili by bringing her 21-fight unbeaten run to an abrupt end via an early head kick KO to seize the belt back in April.

The fast nature of that finish still leaves unanswered questions as to how this fight would play out over a longer stretch, so now they’ll do it all over again, and its still as exciting a match-up as ever.

‘Thug’ Rose has become something of a giant-killer as she also TKO’d long-time champ Joanna Jedrzejczyk in the first round too, and for someone who isn’t really an imposing figure physically it really speaks to how valuable assets like speed, clean technique and razor-sharp timing can be.

Weili remains a talented striker in her own right though, but she does lean heavier on her constant pressure, pace and volume of strikes to overwhelm opponents, and in general that works out very well for her.

However, it’s a style that does leave openings that a faster, more clinical operator like Namajunas can exploit while operating at range, and the current champion has the cardio to match Weili in the later rounds too.

Meanwhile, Weili is the physically stronger fighter and could seek to wrestle Namajunas, but that would be a risky strategy as ‘Thug’ Rose’s submission game has always been a particularly sharp aspect of her fight game.

I’m very intrigued to see how this fight plays out. Regardless of her KO last time out, Weili remains an excellent fighter and I think it’ll be a much closer contest this time around, but I do still have to lean towards Namajunas to be the slicker, smarter and quicker fighter on the feet and work her way to a win on the scorecards.

This should be a wild fight between two former title contenders who have dynamite in their hands and are hardwired to attempt to deliver a big finish at all costs.

Gaethje in particular is insanely offensive, willing to eat big shots to land his own. He’s not the type of fighter that just loads up looking for one big punch though, instead delivering big offensive salvo’s of power punches and debilitating leg kicks without slowing down, and it’s a style that’s led him to 19 stoppages via strikes from 22 career victories.

It’s a strategy that has seen him rocked on multiple occasions over the course of time in the sport though, and while his powers of recovery are impressive, his unbeaten run did end after he reached the UFC, having now been finished twice by strikes and once by submission in his 8-3 Octagon run so far.

While he might not quite match Gaethje’s volume, Chandler is still a very active and dangerous striker with heavy hands, but like his opponent he can be hit, he can be hurt, and four times between his Bellator and UFC runs he’s been finished via strikes, including being TKO’d by Charles Oliveira last time out.

Chandler is a more versatile fighter than Gaethje though as while ‘The Highlight’ does have a background in wrestling, he doesn’t really use it much other than to keep the fight standing. On the other hand, Chandler is much more willing to utilize his wrestling and also backs that up with a solid submission threat too.

So, all signs point to a finish here, and it really could go either way. I think Chandler’s best chance is to show off his full MMA skill-set, but there’s going to be a lot of striking on show here and I just feel Gaethje’s more durable and will land the kind of punishing blows that I’m not sure Chandler can take at this stage in his career, leading to a second round TKO finish.

Prediction: Justin Gaethje to win by TKO in Rd2.

Burgos suffered one of the most alarming delayed-reaction KO’s we’ve ever seen in the Octagon last time out against Edson Barboza, with his body suddenly shutting down after a five second delay, but as dramatic as that was, he had still been fairly competitive in the striking battle up until that point in the fight.

Like Burgos, Quarantillo is an all-action striker who fights at a very high tempo from start to finish and can overwhelm opponents with the sheer volume of offense coming there way, while he’s also capable of finding a finish on the mat via submission too.

The problem for Quarantillo is that Burgos can give as good as he gets in terms of pace and volume, while I’d say he also has the sharper, harder-hitting boxing ability here, not to mention a 5.5″ reach advantage.

So, assuming that Burgos is 100% ok after his last loss then I like his chances of landing the more telling blows in an entertaining scrap that goes the distance.

Edgar turned 40-years-old recently and there’s certainly been signs that age has been catching up to the veteran as all three of his career losses via strikes have come in the past few years, including a brutal KO loss via a flying knee last time out against Cory Sandhagen, which left him with only two wins from his last six fights.

Meanwhile, Vera is 12-years his junior and has been experiencing mixed fortunes in the Octagon of late, alternating between wins and losses in his last four fights, but against a good level of competition, with his wins coming against Sean O’Malley and Davey Grant, while his losses were against Jose Aldo and Song Yadong.

Despite his advanced years, Edgar is still in great physical condition for his age and pushes his trademark pace throughout his fights, staying busy darting in and out of range with strikes that don’t hold much stopping power, but can help him win rounds. Having dropped down two divisions over the years from lightweight, Edgar’s speed doesn’t have as much of an impact though as it did against bigger opponents, and his diminishing durability is also a concern.

Vera has the striking ability to go up against Edgar here and the power to test his chin, so I think more than ever this is the time that ‘The Answer’ has to take a leaf out of newly crowned light-heavyweight champ Glover Teixeira’s book and utilize the full extent of his MMA game by bringing his strong wrestling game to the forefront.

I think Edgar is smart enough to realize that this is the key to extending the longevity of his career, and while Vera is a threat on the feet, I don’t believe he has the kind of firepower that’s likely to end the fight inside the distance if his striking opportunities are limited due to the mat work he’ll be forced into, so I’m cautiously siding with Edgar to grind out a decision win here.