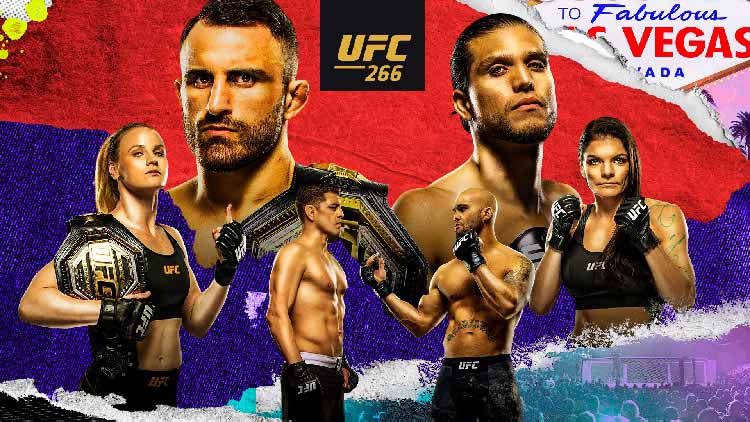 Volkanovski has so far been an unstoppable force in the UFC’s featherweight division, racking up nine wins in a row, while Ortega was also riding high during a 15-fight unbeaten start to his MMA career, but he finally came unstuck against Max Holloway back in 2018 in a one-sided beating.

However, after an almost two-year absence, Ortega made a stellar return to action last year with a five-round dismantling of ‘The Korean Zombie’, during which he showcased what appeared to be major improvements to his striking game, making him a formidable opponent given his already well proven prowess in Brazilian Jiu-Jitsu.

That being said, Volkanovski has already proven his own striking ability, including back-to-back victories over the aforementioned Holloway, in addition to having good cardio and durability and very good wrestling too, which could well shut down Ortega’s attempts to get him on the canvas, as takedowns are not a strong aspect of ‘T-City’s’ game.

The only concern of late for Volkanovski is that he had a very rough time of it battling long-Covid, which forced a postponement of this match-up, but while he’s had several months to recover now, we won’t really know how much, if any, toll it’s taken on him until he steps into the Octagon.

Overall, I feel it’s quite likely that this fight will be won and lost on the feet, and as truly great of a performance as Ortega had last time out, it was only one fight, so it’s hard to say with confidence that he can do the same thing to Volkanovski.

The champion isn’t unbeatable on the feet – it could even be argued that Holloway got the better of their second encounter – but he has proven to be a consistent fighter and a tough nut to crack who will push a hard pace while unleashing a high-volume of strikes, and assuming he’s recovered fully from Covid I think that will enable him to gain the upper-hand here and ultimately emerge with a unanimous decision victory.

The 38-year-old Murphy deserves a lot of credit for battling to a title shot at this stage in her career. Winning five fights in a row is no mean feat, especially when you consider she’d actually lost four of her first six fights prior to that.

However, it’s well established that it’s going to take something special to dislodge dominant champion Shevchenko from the flyweight throne as she’s so far proven to be head-and-shoulders above the competition and her mix of elite striking and strong grappling leaves few weaknesses for her opponents to exploit.

As such, it’s difficult to see how Murphy can win here as while she’s a fairly solid all-rounder, there’s not an area where she comes close to having an edge over the champion.

It should also be noted that two of Murphy’s victories during her winning streak were only by split decision against seasoned strikers in Joanne Calderwood and Andrea Lee, and I’d expect that Shevchenko will give her considerably more trouble on the feet, while also being able to shut down her attempts to get the fight to the mat, unless it’s on her terms.

Murphy has never been stopped inside the distance, but Shevchenko has become more of a finisher during her flyweight reign and so whether on the feet or on the mat I feel she can emerge victorious before the fight reaches the championship rounds.

In the end I think Murphy will repeatedly eat big strikes as she tries to take the fight to Shevchenko, which will eventually result in her being TKO’d by the third round, if not sooner.

Prediction: Valentina Shevchenko to win by TKO in Rd3.

It was all the way back in 2004 when Diaz and Lawler first locked horns in the Octagon at a relatively early stage in their respective careers, and despite ‘Ruthless’ being a feared striker at the time, Diaz started the fight in fearless fashion as he taunted his opponent and then went on to deliver a stunning second round KO finish.

Both went on to achieve big success in the sport over the years, but things haven’t gone Lawler’s way in recent years as he’s lost five of his last six fights, while Diaz hasn’t fought in well over six years after going three fights without earning a victory, and at times has appeared to be over-indulging in the party lifestyle.

So, there’s uncertainty about how both men will perform at this stage in their respective careers, and adding to the confusion, at the time of writing just days before the event it’s just emerged that Diaz has negotiated for the fight to be at 185lbs instead of 170lbs!

The stand -up battle here should be intriguing here as though Diaz did KO him last time out, it’s typically Lawler who has the far greater one-punch knockout power, though he’s become a more careful, precise striker these days than he was in the past.  That being said, there’s even been signs that he’s become uncharacteristically gun-shy recently, which is a cause for concern.

Diaz excels at operating a high-volume approach to his boxing work, and while at times it appears that his punches don’t carry much weight, the sheer number and accuracy of blows that land has resulted in numerous opponents wilting over the years.

Lawler has a wrestling base, but he’ll only use that in an attempt to keep the fight standing, since Diaz is a high-level BJJ player who would have a high potential of delivering a submission finish if they tangle on the mat for long.

Even though it’s not a title fight or main event, this is a five-rounder and I think that regardless of his long layoff, Diaz’s naturally strong cardio and love of triathlons will benefit him here.   Not that Lawler can’t fight five rounds, but he does tend to noticeably take his foot off the accelerator in the middle rounds, even at 170lbs, and so I think that’ll only be more evident due to the late switch to 185lbs.

Given that Diaz doesn’t really stop marching forward throwing punches I think that will enable him to get the upper-hand here, with his pace and volume of strikes keeping Lawler from finding his groove, leading to a decision victory.

Blaydes is one of the heavyweight division’s more well-rounded fighters, with his wrestling being particularly strong for the weight-class, but unfortunately for him his path to title contention has now repeatedly remained agonizingly just out of reach due to his tendency to bestopped by some of the division’s heaviest hitters.

Ngannou has now TKO’d him in two separate outings, while in his most recent fight, Blaydes carefully compiled four-fight winning streak collapsed when he was KO’d by Derrick Lewis.

So, Blaydes will no doubt be wary of Rozenstruik’s striking threat as the former kickboxer has finished all six of his UFC wins to date inside the distance via strikes.

However, there are also numerous reasons for Blaydes to be optimistic here as Rozenstruik doesn’t really have a ground game, so there’s ample opportunity for ‘Razor’ to execute a wrestling-focused game-plan here.

Meanwhile, Rozenstruik has also had a tendency to fail to pull the trigger at times in his recent outings, seemingly waiting endlessly for the perfect moment to strike.

That could lead to something of a game of chicken here as Blaydes has to close the distance to get the fight to the mat, while Rozenstruik will be sitting back waiting to counter-strike any such attempt.

In the end though I think I favor Blaydes ability to get the fight to the floor and stifle his opponent for three rounds to secure a decision victory here.

Former strawweight champion Andrade’s not had the best of runs of late, having lost three of her last four fights, including a TKO defeat to flyweight champion Valentina Shevchenko last time out.

Meanwhile, Calvillo lost on the scorecards to Katlyn Chookagian last time out, although she was four-fights unbeaten prior to that.

Andrade gives up 3″ in height and 2″ in reach here to Calvillo, but that’s nothing new for her and she’ll happily apply plenty of pressure as she drives forward looking to land punches and impose her will.

Calvillo’s striking has shown signs of improvement and she has a rangey style with straight punches and kicks, but while Andrade no longer seems as indestructible as she once was, I don’t think Calvillo’s got the kind of power that’s going to trouble her or make her hesitant to engage.

Instead, Calvillo’s best weapon remains her talented jiu-jitsu, having proven to have a very offensive submission game and strong scrambling ability.

That will certainly give Andrade pause for thought as a big part of her game is rag-dolling her opponents to the canvas and then mauling them, which could leave her exposed for a crafty submission attempt.

Overall though I think Andrade will be able to keep this fight upright for the most part and prove to be too strong and hard-hitting for Calvillo as she presses forward for the full three rounds and emerges with a decision win.