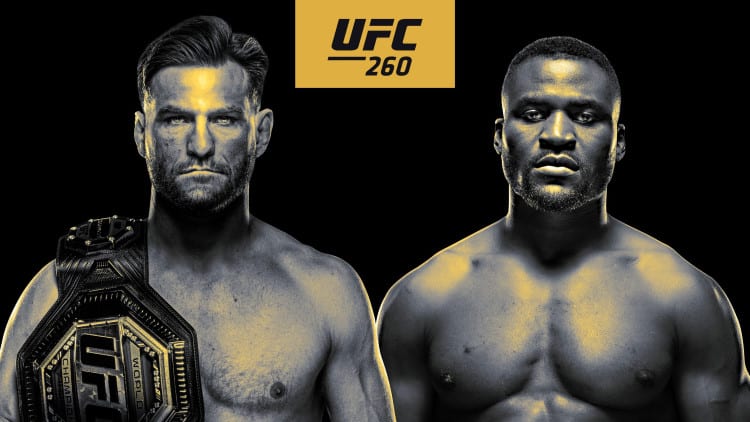 There was a great deal of hype surrounding the first meeting between these two, but unfortunately ‘The Predator’ didn’t really show up that night, enabling Miocic to cruise to a decision victory using his wrestling.

Ngannou’s stock took a hit after that and he doubled down with an uncharacteristically timid performance in a decision loss to Derrick Lewis, but thankfully he’s more than restored faith in his ability since, getting back to his best with four T(KO) victories in the space of less than three minutes of fighting.

Meanwhile, Miocic was KO’d by Daniel Cormier in his next fight, but has since been back to his dependable best since, avenging the loss to DC twice.

Part of Miocic’s success is that he’s so well-rounded, with good technical boxing, very solid wrestling and excellent cardio for a heavyweight. Ngannou has now had three years to try to make up the difference, but it’s a tall order, and if he has developed any kind of a ground game it still remains under wraps due to the swift nature of his trips to the Octagon, though there are glimmers of some takedown defense improvements, which could be a big factor.

Ngannou’s lack of cage time also leaves lingering concerns regarding his cardio, particularly as Miocic will keep a high tempo and be testing his abilty to defend takedowns and operate in grueling clinch work alongside the striking exchanges.

What is clear though is that Ngannou is a phenomenally heavy-handed striker, and as durable as Miocic is, one big connection could still switch out his lights. I do still question how he’ll hold up mentally if he can’t get that quick stoppage though, and meanwhile I suspect his desire to more cautiously conserve his energy this time out may serve to dampen some of his ferocity.

Miocic has good fight IQ and the broader skill-set and so while it will be nail-biting stuff I feel he can ride out the early storm and make liberal use of his grappling and stamina advantages to emerge with another decision victory.

For a fighter who seized the welterweight title in a blaze of glory with a quick KO win against Robbie Lawler back in 2016 and seems to have so much going for him, it’s being very disappointing to see how completely underwhelming and uninspired the majority of his fights have been since.

Much of Woodley’s title reign was spent indulging in staring contests with the likes of Stephen Thompson and Damien Maia, while it’s got worse since as the likes of Kamaru Usman, Gilbert Burns and Colby Covington have completely dominated him.

Now 38, Woodley’s prime years are firmly in the rear-view mirror, but that being said, athletically he’s still a specimen and he continues to cover ground very quickly when he chooses too and has genuine KO power. The problem is that he’s incredibly hesitant to pull the trigger with any regularity and often just gets stuck on the outside doing nothing in particular.

On the other hand, Luque is not a fighter who needs to wait for an invitation to let his hand go and will bring the fight to Woodley with high-volume assaults and is a certified fight-finisher with 8 stoppage wins due to strikes in 12 UFC wins to date.

While Woodley was overwhelmed by the division’s elite wrestlers, he does have good wrestling of his own and I do think that could be a big factor in revitalizing his career at this stage and would be a solid strategy against Luque, but it’s been such a long time since he’s utilized it that it’s hard to have any confidence that he’ll go down that route.

Instead Woodley will more than likely hope to use Luque’s aggression against him to land a big counter, and certainly he is hittable, but at the same time ‘The Silent Assassin’ has yet to be stopped by strikes in his career.

I just can’t have any faith in picking Woodley right now when he seems to have long since mentally checked out and abandoned his killer instincts, so I’m going for Luque to outwork and outland him with his hard-hitting offense to earn a decision victory.

O’Malley’s hype train took a hit last time out when he accidentally injured his leg during the fight and then Marlon Vera targeted the injured limb with kicks and essentially immobilized him before securing an early TKO victory. The previously undefeated O’Malley has sought to shrug off the loss as a freak occurrence, but his detractors ran him through the mud so he’s got a lot to prove here.

Almeida knows more than a thing or two about what can happen when a long winning streak comes to an end as his did back in 2016 after having won his previous 21 career fights, and he’s now won only one of his last five fights, so he needs a big win to get back on track.

Despite that terrible run of form, Almeida is a potent, technical muay thai striker who in his heyday was stopping fights left, right and center, but his issue became the fact that his ability to take a punch appeared to diminish rapidly, despite still being in his 20’s.

That will be a concern against another very dangerous striker in O’Malley who has excellent speed, timing and ability to pick the right shot at the right time. His legs have been a bit vulnerable on more than one occasion though, so that could be something Almeida has the ability to exploit.

This should be a fun fight given the striking prowess on display, but I do like O’Malley’s chances of finding Almeida’s weakened chin in the heat of the battle and TKO’ing him within 10 minutes.

Prediction: Sean O’Malley to win by TKO in Rd2.

Worthy’s career has been peppered with a few tough KO losses over the years and he was also TKO’d in just 93 seconds in his last Octagon outing against Ottman Azaitar, but it should also be noted that prior to that he was on a seven-fight winning streak, including two victories in the UFC.

Meanwhile, Mullarkey has lost both of his UFC fights so far by unanimous decision, but overall holds a 12-4 career record.

While there are question marks about Worthy’s chin, he is a venomous operator on the feet who should also have a distinct speed advantage against Mullarkey, who is a respectable enough striker, but is not the quickest or most fluid.

Mullarkey may have better luck using his wrestling, but I could easily see him getting caught as he closes in on Worthy, so I’m going to take ‘The Deathstar’ to come away with a TKO win here in the opening round.

Prediction: Khama Worthy to win by TKO in Rd1.

This women’s 125lb fight gets bumped up from the undercard to make up the numbers on the pay-per-view offering.

Maverick spent almost the entirety of her pre-UFC career in the Invica FC promotion and amassed some good experience in her nine fights, and at 23-years-old she’s made an immediate impact in the UFC’s Octagon with a TKO victory in her debut to go 8-2 overall in her career.

The 25-year-old Robertson is also experienced for her age with 14-fights to date, and she’s secured some nice wins along the way, but she’s also hit a ceiling at times when looking to take the next step up the ladder.

Robertson’s striking isn’t her strong suit and mostly serves as a distraction to set up takedown attempts and implement her solid ground game and hunt for submissions.

I think Maverick has a decent chance at stopping those takedown attempts though and she is more comfortable striking, has a power advantage, and will find that Robertson’s striking defense is flimsy at best, which will enable her to land punches and leg kicks consistently on her way to a decision victory.