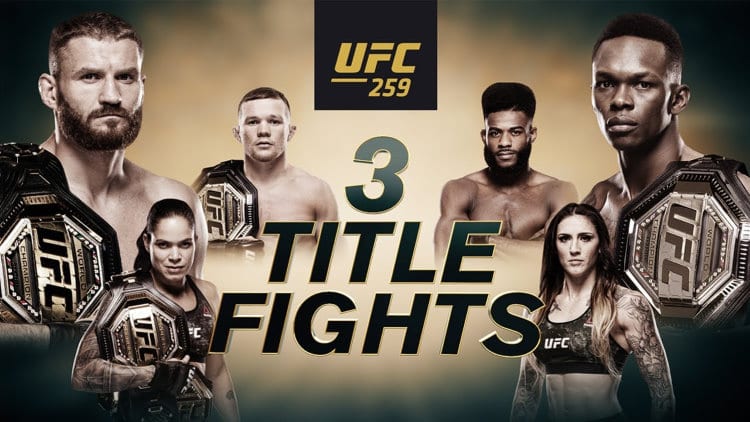 There was a time when Blachowicz was just another light-heavyweight, a former KSW champ who got off to a rough start in the Octagon, losing four of his first six fights. However, he’s since rebounded with an 8-1 run that includes wins over two other established middleweight stars in Luke Rockhold and Ronaldo ‘Jacare’ Souza when they also tried their luck at 205lbs.

So, Blachowicz has earned respect, but there are still questions as to how long he can hold onto that title, and given that Adesanya seemed hesitant to move up to 205lbs until Jon Jones vacated the belt and the Pole took the mantle, it suggests that he thinks he has his number.

It’s not hard to understand why. The 20-0 Adesanya is one of the UFC’s biggest stars and has already dismantled many of the 185lb division’s other big-name stars during his title reign in addition to having an extensive background in kickboxing.

Adesanya’s striking is at an elite-level, not just because he has a wide variety of techniques at his disposal that he delivers with speed, precision and power, but also due to the fact that he is a cerebral fighter who reads his opponent’s well and always seems to be a step ahead – in some ways like a prime Anderson Silva (who he has also beaten).

By comparison, Blachowicz’s stand-up is much more of a meat-and-potatoes style, but he’s refined his boxing fundamentals very nicely and works well behind a stiff jab and has frequently been demonstrating fight-ending power in recent times.

Despite his recent success on the feet I think he would be better off focusing on his ground skills here though as he is a solid wrestler and possesses a submission threat too, which could really put Adesanya out of his comfort zone.

Nevertheless, Adesanya has purposefully opted not to focus on bulking up for this fight, so Blachowicz should be the heavier fighter, but ‘The Last Stylebender’ will actually have a 2″ height and reach advantage, which perfectly suits his style as he’s a master of distance management, which will be key to keeping the 205lb champ at bay.

I definitely like Adesanya here as he should be too fast, too skillful and too versatile on the feet for Blachowicz, picking him part on the outside and then finishing him by TKO by the second round to become the UFC’s latest double champ.

Prediction: Israel Adesanya to win by TKO in Rd2.

Whether it’s at bantamweight or featherweight, nobody has come close to ending MMA’s greatest female fighter, Amanda Nunes reign of dominance, so the former Invicta FC champ Anderson has her work cut out for her here.

Anderson’s UFC record doesn’t exactly scream title contention – she’s only gone 3-2 so far in the UFC, including her latest back-to-back wins over relatively low-hanging fruit in Zarah Fairn dos Santos and Norma Dumont, but such is the threadbare nature of the UFC’s 145lb weight class that she now finds herself in this position.

Anderson is a solid kickboxer though and she is a genuine featherweight who will have a very significant physical advantage, being 4″ taller and with 3.5″ in reach over Nunes. Anderson has power to go with her size and she’s never been stopped by strikes.

Nunes is a terrific technical striker though and will have a big speed advantage too, and having previously disposed of dominant former champion Cris ‘Cyborg’ in less than a minute, she knows she’s proven that being up a weight class hasn’t diminished her finishing ability.

That being said, Nunes biggest advantage here is her ground game as it’s another area that she excels in, and it happens to be a weak point for Anderson, who can be taken down and could easily be overwhelmed by the Brazilian’s predatory submission prowess.

So, I think this fight really boils down to how long Nunes opts to challenge herself on the feet against Anderson. If she avoids that altogether and goes for the takedown immediately then this one could be over very quickly, but let’s say she gets a round under her belt before sealing the deal by submision in the second round.

Prediction: Amanda Nunes to win by submission in Rd2.

The third title fight on the card is an intriguingly balanced fight that pits current champion Yan against another in-form fighter in Sterling.

Yan has been a force on nature in the UFC so far, tearing through the competition with his aggressive striking that combines both power and volume, demonstrating very strong boxing and dangerous kicks, along with the kind of cardio that allows him to keep his ferocious pressure game going for as long as it takes to get the job done.

Nobody has had an answer for that so far, and while Sterling will have a 4″ reach advantage and has developed his striking game nicely in recent years, it’ll still be a tall order for him to match up to the Russian in the striking department.

However, Sterling’s improvements and speed will help him to mix things up better to set up his takedowns, and it’s his grappling that is where he really shines as he has both strong wrestling and Jiu-Jitsu.

Yan’s never really been tested on the mat, so there’s some real unknowns here and as such it puts this match-up on a knife-edge. I can absolutely see Yan overwhelming his opponent with his striking onslaughts, but at the same time I think Yan’s intense offense could well leave opportunities for Sterling to work takedowns.

That being said, Yan sprawls very well and if he can deny some of Sterling’s early takedown attempts then I think he can give him more than he can handle on the feet and come away with a third round TKO stoppage.

Prediction: Petr Yan to win by TKO in Rd3.

For some time now Makhachev has been something of a sleeping giant in the UFC, having all the skills to make a big impact, but being held back by not competing frequently due to a variety of issues.

When he has got into the Octagon he’s made an impact though, racking up six wins in a row thanks to his solid stand-up and a stifling ground game that’s so good, Daniel Cormier claimed just this week that Makhachev was even better than Khabib Nurmagomedov in terms of straight wrestling.

So, with Khabib taking a backseat now, the hype train is starting to build for Makhachev, but at the same time his next opponent Dober has been making moves in the division without the same fanfare, having won six of his last seven fights.

Dober has always been an industrious, hard-working fighter with good boxing and can wrestle too, but he’s improved his skills over time and is now more dangerous, as evidenced by the fact that he’s finished his last three opponents by either KO or TKO.

On the feet Dober certainly has a chance with his pressure game and power, but his takedown defense isn’t the best and he has come unstuck against high-level grapplers in the past. Makhachev is a machine with his takedowns and on the mat it’s hard to find anyone who can deal with his dominant control on top, so this should be another victory on the scorecards for him, or potentially even a stoppage by submission.

Fireworks should be all but guaranteed if these two top-5 ranked 205lb strikers got to battle on the feet.

Both men are absolute killers in the striking department. Santos has been with the UFC longer and so his finishing resume is the more impressive of the two, having taken out a string of big names at both middleweight and light-heavyweight while demonstrating thunderous kicks to go with his heavy hands. On the flip-side, he is the older of the two at 37, he’s suffered some tough leg injuries in recent years and was also KO’d a couple of times during his 185lb run.

Rakic hasn’t been quite as much of a KO-machine since joining the UFC, but the 29-year-old is still very dangerous on his feet and has never been stopped by strikes in his 15-fight career.

Perhaps crucially, Rakic is also the better of the two on the mat, possessing a solid wrestling game that could change the whole dynamic of this fight if he chooses to use it.

When there’s this much firepower on display, either man could walk away with a big win either, but I’m going to side with the fresher, more youthful Rakic to hold his own on the feet, while also using takedowns to gain control on the mat on his way to a decision victory.