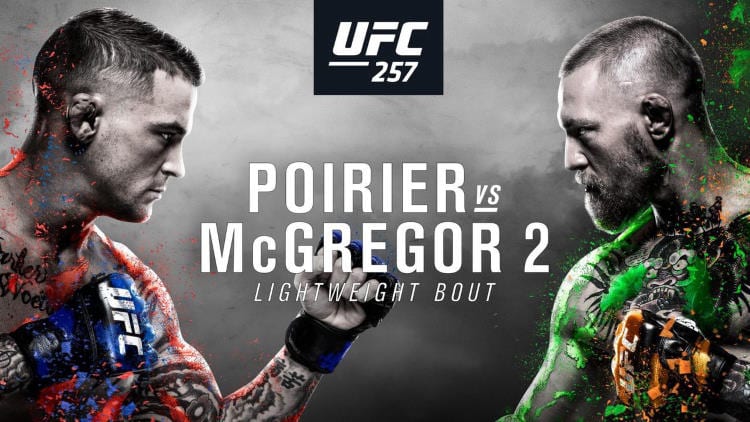 it’s great to see this rematch at last as I must admit I felt a bit disappointed that their first encounter all the way back in 2014 ended in less than two minutes, as even back then it seemed like a great striking match-up.

Even at that earlier stage in his career Poirier was certainly better than the outcome of that fight would suggest and he’s proven that in the years since with a very consistent and strong run of form, while the move up to lightweight has worked well for him and has given a chance to perform at his best.

Still, he’ll have to cast aside the memory of that TKO loss to McGregor this time around, and his skill-set will give him confidence as he’s a very good boxer with fast, accurate hands and he puts his combinations together well, while he’s very capable on the mat too and in a five-round fight like this his strong cardio and ability to mix things up could become very important.

McGregor still remains a special talent on the feet though. He has only fought once in the Octagon in the past two years, but even though Donald Cerrone is on a clear decline, it’s still impressive how quickly and clinically ‘The Notorious’ dismantled him last January, which suggests that even with all the distractions in his life these days, he’s still got the ‘it’ factor come fight night.

McGregor has the kind of natural finishing power every fighter wishes for, but he also reads the game exceptionally well and remains clinical in the heat of the moment, showing a great knack for picking out the right strike at the right time and is razor-sharp on the counter.

McGregor is also no slouch on the mat, but his cardio has certainly been an issue at times, both in the Octagon and in in his sole boxing fight, although I believe competing at lightweight is better for him than welterweight in that regard.

The Irish superstar has never been stopped inside the distance by strikes, so if Poirier is to win I think it will be by pushing a hard pace and taking him into deep waters to get a decision victory.

However, as much as I do feel Poirier is a great fighter, I still think McGregor has the edge here and he’ll be able to find a stoppage via strikes, but more likely in the second or third round this time around rather than the first, which will give us all more time to enjoy this high-level spectacle.

Prediction: Conor McGregor to win by TKO in Rd2.

One of Bellator’s biggest ever homegrown stars, three time lightweight champion Michael Chandler finally makes his way over to the UFC for a big debut on Saturday night against No.6 contender Dan Hooker.

Chandler is known for being in exciting fights, not least his two title wars with future UFC champ Eddie Alvarez, while he also has two wins over another former UFC titleholder Ben Henderson too, so he’s already proven he can mix it up with top-flight talent over the years.

Chandler is a heavy-handed striker, but he’s also a very good wrestler too and can bring the heat with his ground and pound, while also having the skill to seize on submissions if required.

On the other hand, at 34-years-old and following numerous wars, Chandler’s chin isn’t the best, having been rocked regularly and stopped on occasions. That’s a real concern as he’s going up against a dangerous striker in Hooker, who will have a big 4″ height and 6″ reach advantage here and has a much broader striking arsenal to work with, throwing kicks, punches, knees and elbows.

Hooker is also exceptionally durable, though after a brutal war with Dustin Poirier last time out there is a concern that it’s only a matter of time before that starts to take a toll on him.

Hooker is capable on the mat and has a solid submission threat, but I’d say Chandler’s the better wrestler and so he’ll be looking to keep this one on the feet and work his striking from range.

It’s a very good match-up and both men have a real chance to emerge victorious. Chandler’s most likely route to victory is by mixing things up and using his wrestling regularly, but it’ll be difficult to get inside on the lanky hooker and there’s always the risk of eating a knee while making his takedown entries. I’ll take Hooker to spoil Chandler’s debut via TKO in the second round.

Prediction: Dan Hooker to win by TKO in Rd2.

Eye has enjoyed much more success at flyweight than at bantamweight in the UFC and even had a chance to fight for the title, losing out to Valentina Shevchenko, while Calderwood came very close to a title challenge herself, but like Eye has now lost two of her last three fights.

Eye is a solid technical boxer who doesn’t have a great deal of power, but certainly has good speed and is solid defensively. Calderwood has more weapons courtesy of her extensive muay thai background and so she’ll mix things up more with punches and kicks from range blending with effective knees and punches at closer range.

Both ladies have basic ground skills, with Eye perhaps edging the wrestling, but I think they’ll both be happier keeping this one standing and it should be closely fought, but I’ll take Calderwood more versatile offense will enable her to edge this one on the scorecards.

Azaitar has put together a formidable 13-0 career record so far, with 12 of those wins coming inside the distance, and the vast majority coming courtesy of his thunderous punching power.

Frevola is a former Contender Series recruit who has had his ups and downs since joining the UFC, but is currently on a two-fight winning streak.

Frevolva is a wrestle-boxer and on this occasion he’d do well to focus on the former rather than the latter as he’s very likely to get outgunned on the feet by ‘Bulldozer’.

Frevola’s best bet would be to grind this one out with wrestling, especially in the early rounds, but I do think Azaitar’s striking might well end up causing him problems early and lead to a first round TKO stoppage.

Prediction: Ottman Azaitar to win by TKO in Rd1.

Ribas is enjoying a lot of fanfare relatively early in her UFC career after racking up four wins in a row since joining the promotion in 2019, while Rodriguez is coming off a draw and a loss, but it should be stressed those were both close fights against good opponents, losing out by majority decision to Cynthia Calvillo and then split decision against Carla Esparza.

Ribas can strike, but her grappling is clearly where she’s at her best, and so getting the fight to the mat early should be a priority as Rodriguez has very solid striking, is quite versatile in her offensive output and has good cardio.

However, Rodriguez’s takedown defense is weak and that will be a big plus point for Ribas, whose own takedowns aren’t the best, but should be enough to force the issue and once she has her down, it feels like it’s only a matter of time before she is able to find a submission finish.

Prediction: Amanda Ribas to win by submission in Rd2.