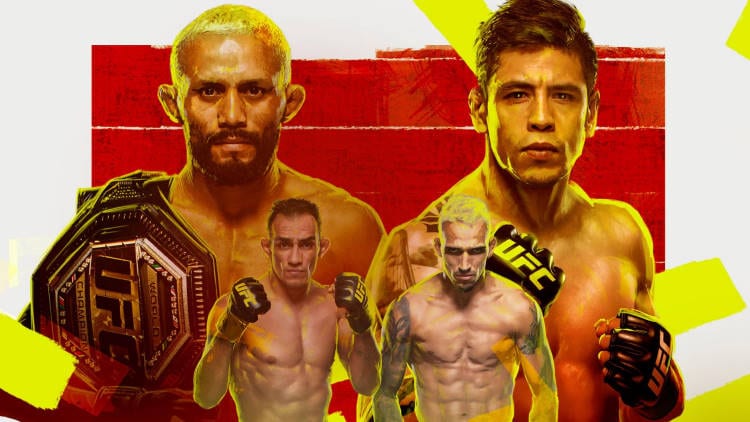 It was only three weeks ago that Figueiredo solidified his status as flyweight champion with a first round guillotine choke victory over Alex Perez and now he’s stepping back in on short notice to fight Moreno after a couple of other previously planned UFC title fights fell through.

Moreno also fought on the same card a few weeks back, picking up a first round TKO victory over Brandon Royval, taking his UFC record to 7-2-1. Despite being 27-year-old, ‘The Assassin Baby’ actually has 25 career fights under his belt, and as you might expect based on that, he’s a well-rounded fighter who is a capable boxer, but is a bigger finishing threat on the mat, where a substantial amount of his career stoppage wins have come via submission.

Moreno also has a couple of inches of height and reach over Figueiredo, but the champion cuts a lot of weight to get down to flyweight and will be the heavier man on the night. That only makes Figueiredo’s already hard-hitting, precision striking even more powerful and he has the kind of potency on the feet as a finisher that’s rarely seen at 125lbs.

The fact that Figueiredo also has a strong submission game makes him hard to beat and while he’ll have to be wary of the fast-scrambling Moreno if the fight goes to the mat, it’s something he can deal with. However, it’s more likely that he keeps this one standing, puts a lot of pressure on Moreno with big strikes and finds a finish in the first ten minutes by TKO.

Prediction: Deiveson Figueiredo to win by TKO in Rd2.

After a remarkable 12-fight winning streak, Ferguson’s title hopes were finally dashed when he came off second best in a stand-up battle with Justin Gaethje and lost by TKO, and so he now hopes to get back on track before the year is out against a very tricky opponent in Oliveira, who has assembled his own seven-fight unbeaten run over the past couple of years.

It’s a very exciting match-up as these two are terrific fighters who also happen to be natural entertainers in the Octagon and of course proven finishers too, with Ferguson having found a stoppage in 20 of his 25 career-fights, while ‘Do Bronx’ has a remarkable 27 stoppages in 29 victories and holds the record for the most submissions in UFC history (14).

There’s no doubt that Oliveira’s grappling is his biggest asset, but he has a good and varied offensive arsenal on the feet too and an element of unpredictability to his output and isn’t afraid to launch into more exotic techniques.

That being said, throughout his UFC run Oliveira has been finished by talented strikers several times and Ferguson pushes a torrid pace, is even more creative than the Brazilian and with better footwork and angles, while being the more effective and damaging with his offensive offerings. ‘El Cucuy’ is also exceptionally tough and other than Gaethje, nobody’s been able to stop him with strikes.

So, the stand-up action favors Ferguson and Oliveira will surely be looking to mix things up and get the fight to the floor, where he’s an excellent scrambler and will tirelessly work on finding submission attempts from all angles. Ferguson is also very crafty on the mat though, so he will be able to hang with his opponent for the most part, and could catch him by surprise with his own submission prowess.

Overall it’s a great fight and hopefully it’ll be as action packed as it appears on paper, but I do think that unless the Gaethje loss took a big toll on Ferguson that he should be able to make his mark on the feet here and his excellent cardio will push him on to a third round TKO victory.

Prediction: Tony Ferguson to win by TKO in Rd3.

With good striking and strong submission skills, Moicano made an impact in the featherweight division, though ultimately came unstuck against three of the biggest names in the class, The Korean Zombie, Jose Aldo and Brian Ortega, so these days he’s trying to work his way up the lightweight ranks, and picked up a win in his divisional debut earlier in the year.

As for Fiziev, he’s a talent striker – good enough that he’s actually a coach at Tiger Muay Thai – and that’s resulted in back-to-back victories in the UFC after losing his debut.

If Fiziev can keep this one standing then it should prove to be a close encounter, but one that he certainly has the potential to win, as though Moicano is technically solid as a striker, Fiziev is more accomplished in that regard.

There’s no doubt that Moicano is the more well-rounded fighter here though and so his grappling becomes a crucial component here. Moicano’s wrestling isn’t his strongest suit, but he will be competitive enough in the striking that he can pick his moments to swoop for takedowns and I think it may only take one or two trips to the mat for him to find a submission here.

Prediction: Renato Moicano to win by submission in Rd2.

After a positive Covid-19 test knocked him off his originally intended main event fight with Jack Hermansson last weekend, Holland gets another big fight in short order against ‘Jacare’ Souza on Saturday night instead as he looks to build on his current four-fight winning streak.

As for Jacare, he too was taken off a UFC card on short notice early in the year due to Covid and so this will be his first opportunity to fight in 2020. As with a few other veteran campaigners on the card, the 41-year-old will be very much aware that after losing his last two fights in a row, that his job could be on the line due to major end-of-year UFC roster cuts if he can’t get back in the win column at this event.

Holland is 2″ taller than Jacare here, but has a whopping 8″ reach advantage and with his straight-down-the-pipe punches that’s going to make life difficult for the Brazilian on the feet, and he’s not the most elusive target defensively.

Nevertheless, Jacare will be aiming to try to close that distance and try to bring Holland to the mat, where his elite level Brazilian Jiu-Jitsu could swing the fight firmly in his favor. Holland definitely doesn’t have bullet-proof takedown defense so that’s certainly possible, though Jacare’s a reasonable wrestler but not exactly a takedown specialist.

It’s an intriguingly balanced fight then. If Souza gets lured into a striking battle I just don’t see this aging version of himself faring well against Holland, but much like Damien Maia, BJJ ability ages gracefully and if he can survive the shots he’ll eat while getting inside on his younger opponent, I think there’s a real chance he can get him down and find a submission. With his job on the line, I’ll say that gives him all the motivation he needs to do just that.

Prediction: Ronaldo ‘Jacare’ Souza to win by submission in Rd2.

Dos Santos plays the part of the grizzled veteran here with a huge experience advantage over rising star Gane, who is undefeated in his MMA career so far, but only has six fights under his belt.

This is a very important fight for JDS as he’s lost his last three fights in a row, and at a time when Dana White has hinted that they are looking to make more major cuts to the roster in the wake of Yoel Romero being released, the former champion’s future in the Octagon is not guaranteed.

Dos Santos remains a good technical boxer and has very nice footwork and speed for a heavyweight, but he has taken a lot of punishment over the years and it’s really showing now with all three of his latest losses coming via TKO.

Gane is a serious physical specimen and will have a 4″ reach advantage over JDS, but intriguingly, despite his powerful frame and very solid muay thai striking he’s actually been picking up wins via submission in two if his three wins in the Octagon so far.

That kind of well-rounded skill-set at a relatively early stage in his MMA career is exciting to see for a heavyweight, though it might be trickier to pull off a submission against ‘Cigano’, who has adept at keeping his fights standing and has only been submitted once in 29 career fights.

So I think this one will be won and lost on the feet, and perhaps JDS has a chance if he operates cautiously, using good movement and picking his moments to land punches and then get back out of range, but Gane is the longer fighter and given ‘Cigano’s’ weakened chin, I have a feelings he’s not going to need to catch him too many times to emerge with a TKO or indeed even a clean KO victory here.

Prediction: Ciryl Gane to win by TKO in Rd2.