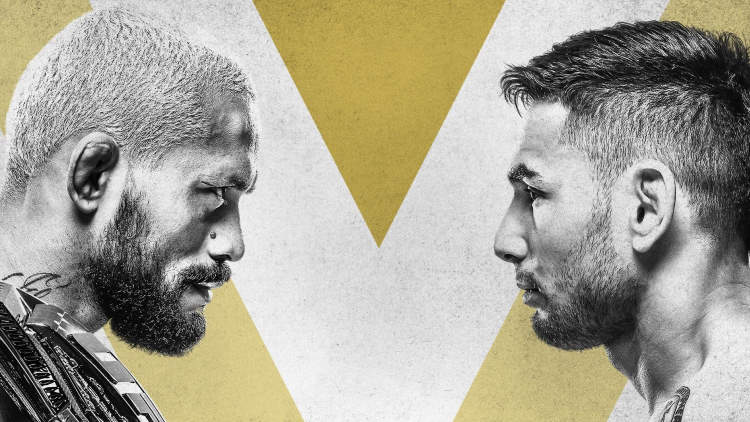 Figueiredo is flying high right now as the flyweight champion after back-to-back wins over long-time top contender Joseph Benavidez, taking his overall UFC run to 9-1, while Perez has so far gone 6-1, with his only loss coming against the aforementioned Benavidez.

Size wise there’s not too much to choose between them at first glance, with Perez being an inch taller, while Figueiredo has a 1.5″ reach advantage, but the champ cuts a lot of weight to make the 125lb limit and hits with the kind of finishing power that you rarely see in this weight class.

figueiredo is also fast and accurate, so though Perez is a capable striker in his own right, he’s not wielding anything like the same kind of power and is likely to find himself outgunned.

However, Perez has solid wrestling and submission skills, so he may see that as a potential avenue to victory. That being said, Figueiredo’s ground and pound is punishing and his own submissions are a major threat, so he’s going to pose problems wherever the fight goes unless Perez can completely stifle him on top.

Overall, Figueiredo just looms large as the more dangerous fighter here and with his confidence soaring he’s looking better than ever, which will lead him to a second round TKO stoppage here.

Prediction: Deiveson Figueiredo to win by TKO in Rd2.

Since moving down to flyweight Shevchenko has been head-and-shoulders above the rest of the pack at 125lbs, compiling a 5-0 run along the way and it’s going to be a tall order for Maia to break that trend.

The 32-year-old Maia does bring some credentials to the cage, being a former Invicta FC flyweight champ a few years, but the fact that she’s only gone 3-2 since joining the UFC in 2018 tells it’s own story about the relative lack of serious contenders at 125lbs right now.

Maia has defeated credible opponents like Joanne Calderwood, Roxanne Modafferi and Alexa Davis during his time in the Octagon though and has solid, if not particularly potent muay thai striking together with good Jiu-jitsu skills on the mat.

Unfortunately for Maia she’s going up against an excellent technical striker in Shevchenko, who also has a 1″ height and 3″ reach advantage and is as sound defensively as she is on the offense with her crisp, accurate punches and kicks.

Shevchenko is also a good wrestler and so I think Maia is going to struggle to get the fight to the mat unless it’s ‘Bullet’ who is the one taking her down.

Overall though Shevchenko tends to fight smart and doesn’t take unnecessary chances and so will largely keep this one standing and look to outstrike Maia, potentially only going for a takedown near the end of any close rounds to ensure the fight comfortably goes in her favor on the judges scorecards.

Perry’s been attracting headlines for all the wrong reasons this year for his troubling behavior outside of the Octagon, including allegations of domestic violence by his ex-wife, but yet he’s still fighting in the UFC, and indeed was scheduled to have a high-profile clash with Robbie Lawler at this event until the former champ pulled out due to an injury.

Means has since been drafted in as his replacement and with his gritty, all-action style that suggests that this one could turn into a blood-soaked battle.

‘The Dirty Bird’ Means lanky frame means he’ll have a 4″ height and reach advantage over Perry, but rather than operate at range he does like to get into range to mix in sharp elbows, knees and clinch work together with his punches and kicks.

Whereas Means is more likely to finish opponents with sustained offense, Perry has the type of power that can end a fight with a single blow and he’s also very hard-headed, which is just as well as he tends to get hit as often as he lands himself.

It’s somewhat tempting to pick Means here as he uses his weapons well, can even offer up a submission threat and frankly is just a bit more stable of a human being than Perry, who seems to be in danger of going completely off the rails.

Nevertheless, Perry’s power can be overlooked and he is the type of fighter who will be willing to eat some strike in order to land something harder of his own, and I think that’s how he’ll emerge with a second round TKO stoppage.

Prediction: Mike Perry to win by TKO in Rd2.

For the second fight in a row, Chookagian goes up against a former strawweight and she’ll be hoping it goes better against Calvillo than it did against Jessica Andrade last month, who TKO’d her in the first round with a body shot.

Luckily for her, Calvillo isn’t wielding the kind of destructive power that Andrade does and ‘Blonde Fighter’ will continue to hold a significant size advantage, being 5″ taller and having 4″ in reach over her opponent.

However, After having frequent weight cutting issues at 115lbs, Calvillo looked good in her flyweight fight back in June, pushing a good pace against Jessica Eye for five rounds and emerging with a unanimous decision victory.

Calvillo will have to get inside on her opponent, but she is a natural pressure fighter anyway and has improving striking, and while Chookagian’s high volume approach will attempt to keep her at range, she can be guilty of being busy with strikes without actually being particularly effective and doesn’t have the kind of stopping power that’s likely to detter Calvillo and .

Still, if it were purely a striking battle then Chookagian would be very competitive, but Calvillo’s at her best on the mat and I think she has a solid chance to work in some takedowns here, and her scrambles and submission prowess is going to make her a real handful to deal with, which could lead to a tap-out finish, or help her win rounds and secure a victory on the scorecards.

Shogun and Craig fought to a split draw verdict back in November of last year and so 12 months later they are set to do it again.

Craig is known to be a submission specialist who has had a penchant for snatching victory from the jaws of defeat courtesy of his BJJ skills, with his triangle choke in particular having been a particularly effective fight-ender over the years.

However, last year Craig appeared to catch Shogun off-guard by demonstrating a developing striking game that enabled him to give the Brazilian legend a real run for his money on the feet early, to the extent that in the second and third rounds Shogun actually started working takedowns and top control to even the score.

It’ll be interesting to see how Shogun approaches it this time. He’ll certainly have more respect for Craig’s striking this time, but there’s no doubt Rua still has a big power advantage, with the Scottish fighter only having one finish by strikes in his entire career.

That being said, at 38-years-old Shogun is definitely far less durable than he used to be and he’s slowed down a lot too, so there are opportunities for Craig, although he doesn’t have the best chin either.

The mat is definitely still where Craig is generally most effective though, and Shogun’s willingness to go to the mat with him is a plus point as his own takedowns are on the weak side – instead often pulling guard in order to have a chance to work on his submissions.

I would expect a prime Shogun to run through Craig on the feet, but this battle-scarred version of the veteran may well find the going harder and might not get finished, but could get hurt, while I think going to ground with him again for lengthy spells may well be tempting fate, with the Scotsman eventually seizing on a fight-ending submission before the final bell.

Prediction: Paul Craig to win by submission in Rd3.