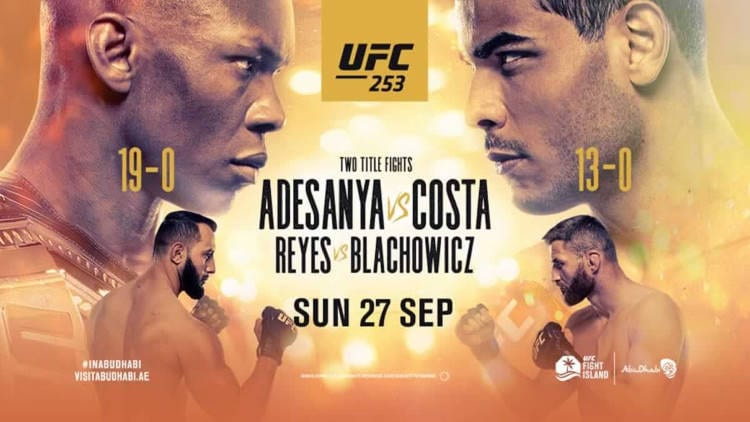 What a fight we have for the main event middleweight title as two undefeated stars with some of the sharpest striking weapons in the sport clash in the cage.

Adesanya in particular has terrific technical kickboxing arsenal that was honed competing extensively in that sport before making the transition to MMA, and his flair, creativity and intelligence in the Octagon have helped make him a master of his craft.

Costa’s offensive is less varied and more predictable than the current champion, but nonetheless he has a solid fundamental skill-set that’s made extremely potent by the fact that he’s an absolute physical specimen, has ferocious punching power and aggression to back it up and a surprisingly high output of strikes.

That being said, due to his propensity for finishing fights inside the distance, Costa has only been to the third round once in his career, in his last fight against Yoel Romero, which he won by decision, whereas Adesanya has plenty of finishes on his record too, but has successful gone five full rounds on three occasions during his UFC run to date.

So, Adesanya may like his chances if he can take the thickly muscled Costa into the championship rounds, and with the benefit of a 4″ height and whopping 8″ reach advantage, together with his diverse striking ability I can see him being able to keep the Brazilian at bay from range, but for as long as his gas tank holds out ‘Borrachinha’ will be marauding forward swinging for the fences, which should make for a thrilling spectacle.

Overall, Costa is a fearsome fighter and it’s daunting picking against someone with that kind of raw firepower and physicality, but Adesanya’s skill, experience and the fact that in 75 kickboxing fights and 19 pro-MMA bouts has only been finished once leads me to feel he can weather the early storm from range and then pick apart his tiring rival in the championship rounds to emerge with either a late TKO stoppage or decision victory.

Prediction: Israel Adesanya to win by TKO in Rd5.

The 205lb title is up for grabs when these two lock horns in the co-main event and for Reyes it comes as he’s coming off the first loss of his 13-fight career. However, considering it came in a fight with the man who has just vacated the belt, Jon Jones, and that he actually gave ‘Bones’ one of the hardest battles of his career, its fair to say that the loss hasn’t slowed his momentum at all.

There’s never been much fanfare surrounding Blachowicz, but he’s quietly compiled an impressive 7-1 run in the division over the past 3 years and after making more of an impact with two KO wins against Luke Rockhold and Corey Anderson, sandwiched in-between a split decision victory over Ronaldo ‘Jacare’ Souza, he’s now within reach of the title.

Despite Blachowicz’s recent striking success, in general its Reyes who has been the more potent fighter on the feet over the course of their careers with fight-ending punches and kicks, while he’ll be the faster of the two here, has better movement and a higher volume output.

Blachowicz has done a commendable job of improving his striking though and while he is more plodding, he has solid boxing fundamentals and developed a crisp jab, mixes in leg kicks well and has proven his power. It’s the Pole’s ground game that’s traditionally been his strongest weapon though, with solid wrestling and good submissions.

However, so far Reyes has demonstrated very good takedown defense and with that in mind, if he can keep this one standing I feel his higher output, speed and angles will stand him in good stead, and though it’ll take him a while to break down the durable Blachowicz, I think he’ll eventually stop him by TKO in the 3rd round.

Prediction: Dominick Reyes to win by TKO in Rd3.

A former LFA champion, Royval made an immediate impression in his short-notice debut when he submitted Tim Elliott, serving a warning to the rest of the flyweight division that his ground game is not to be taken lightly.

Royval has regularly been tapping out opponents in the LFA ranks too, but he does lean quite heavily on his ground game in general as his striking is merely serviceable.

As for Kara-France, he is more of an all-rounder that’s happy to mix things up, though his striking is his best weapon, together with the fact that he fights at a high pace.

Royval’s submission threat is likely to be the biggest chance of this fight ending inside the distance, but I like France’s chances of keeping this fight standing where his striking advantage should enable him to fight his way to decision victory.

After a couple of losses upon her arrival in the UFC, former TUF finalist Eubanks has started to come into her own lately with back-to-back victories.

The latter of those came only a couple of weeks ago by decision, so it’s somewhat surprising that she’s already head straight back into battle in a short-notice fight against a tough opponent in Vieira, who is coming off KO loss last time out.

That being said, Vieira had been on a 10-fight winning streak prior to that, defeating the likes of former title contenders Cat Zingano and Sara McMann along the way, and she competes at the kind of grueling pace wherever the action goes that come fight night may leave Eubanks questioning her decision to take on another bout so soon.

That’s not to say Eubanks doesn’t have the skills to compete though as she’s a strong, robust fighter with solid all-round skills, whether boxing on the feet, wrestling or utilizing her BJJ black belt.

Vieira is well-rounded too though and I think her pressure-heavy style, clinch work and grappling will enable her to gradually tire out Eubanks here and grind out a decision victory.

Dawodu may only has one finish inside the distance during his current four-fight winning streak in the UFC, but that shouldn’t take away from the fact that he’s a very well versed striker, and as you would expect from someone with his muay thai ability that means he presents a threat with punches, kicks, elbows and knees.

Tukhugov relishes the striking battle and while he’s not technically slick like Dawodu, he’s very aggressive and puts a lot into his punches. Of course, as a member of Khabib Nurmagomedov’s camp he is also a very good wrestler too, which will be a concern for his opponent if he takes advantage of his full skill-set and mixes things up.

The problem for Tukhugov is that his cardio generally doesn’t hold up as long as it needs to for his style of fighting, which can leave him vulnerable later in the fight.

This is an interesting one, but on the feet I do feel that Dawodu is a talented enough stand-up technician. that he can make Tukhugov pay for overcommitting on his strikes. Tukhugov’s grappling could be a game-changer however, and though his cardio is a definite red flag I’ll take him to steal rounds with his wrestling and get the nod on the scorecards.