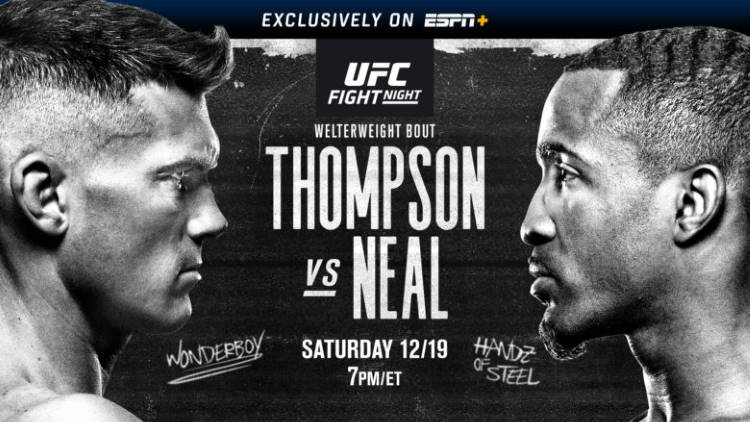 Both Thompson and Neal have waited until the last moment to get in their only fight of 2020 as they headline the final show of the year.

Neal is further down the rankings and has had some health issues lately, but nonetheless he has put together a five fight winning streak since joining the the UFC in 2018, including back-to-back TKO wins over Niko Price and Mike Perry, while Thompson got back to winning ways at the end of last year with a win over Vicente Luque following losses to Darren Till and Anthony Pettis.

This is the kind of high-profile fight Neal needs to shine, and he certainly has the skills to do so as he is a good athlete with genuine finishing power in his fast punches and kicks, yet he is also methodical with his output.

Thompson doesn’t have the same natural stopping power as Neal, but his often kick-heavy karate-style striking is fast, effortless and flawlessly executed, while he’s adept at outpointing opponents on the counter rather than wading in with all-guns-blazing looking for a finish.

This is such a close fight to call. It’s certainly very tempting to settle for Thompson to work cautiously from distance and just do enough to outland Neal and win by decision. Still, as well conditioned as he is, ‘Wonderboy’ is now 37, hasn’t fought in a year and when he has fought has been getting caught more than he used to at times, so I think Neal’s speed and power could catch him out at some stage here and lead to a TKO stoppage.

Prediction: Geoff Neal to win by TKO in Rd3.

Aldo heads into this fight in unfamiliar territory, having lost three fights in a row for the first time in his career, while Vera is having his best run in the UFC to date with six wins from his last seven fights, including a big TKO win over Sean O’Malley last time out.

Aldo has consistently been fighting top-of-the-food-chain talent though and has been competitive, so while he might not be at the very top of his game anymore, he’s not completely washed up and he’ll present a very tough test for Vera.

The former featherweight kingpin remains a high-level striker who has excellent boxing, strong leg kicks and is also very solid defensively, even at close range.

Vera is a good striker in his own right, also possessing boxing ability and solid leg kicks, but he’s not on the same level as Aldo in either regard. Vera is also good on the mat, both with submission and ground and pound, but he’ll have a hard time getting through Aldo’s stellar takedown defense.

However, Vera is the more youthful fighter here, being 6 years the Brazilian’s junior and has never been stopped inside the distance in his 23-fight career to date.

Nonetheless, I think this is the kind of fight that Aldo is still very capable of winning and I’ll take him to outstrike Vera and emerge with a decision victory.

This has all the makings of a thrilling striking spectacle, with Khaos having already delivered two stunning highlight-reel KO victories in a combined total of 57 seconds so far in 2020, while Pereira is one of the most wildly creative stand-up fighters in the sport.

So, Williams has clearly demonstrated his fearsome power, but he’s spent so little time in the Octagon that it’s still hard to get a clear understanding of how well he can compete against UFC level talent when he doesn’t get that early stoppage.

He’s also never faced anyone quite like Pereira before, because his opponent is a unique all-action fighter who loves nothing more than to launch himself into crazily acrobatic striking techniques that incorporates his foundation in capoeira.

That makes him very difficult to predict as he leafs through his endless encyclopedia of exotic martial arts techniques, but while at times it can result in jaw-dropping finishes, it can also lead to him to expend a lot of energy without much in the way of an end product and leave him gassed out later in the fight.

More importantly for Williams, the ballet of violence that Pereira serves up can leave him vulnerable to being hit by those who aren’t scared off by his shock-and-awe approach, and with the kind of one-punch power that Khaos wields and a 4″ reach advantage, I’m narrowly leaning towards him landing cleanly against ‘Demolidor’ at some stage in the first half of the fight to put him to sleep.

Prediction: Khaos Williams to win by KO in Rd1.

It’s not been a great 18 months for Moraes, who was TKO’d in his bantamweight title challenge against Henry Cejudo, only to then be denied another title opportunity despite beating Jose Aldo by split decision in his next fight, and then most recently suffered another TKO loss against Cory Sandhagen in October.

Font, who is fighting for the first time in 2020, isn’t at quite the same level of Moraes recent opposition, but he has had a solid 7-3 run in the UFC to date and is coming off back-to-back victories.

I don’t really like Moraes returning to action only a couple of months after being TKO’d, but there’s still a lot to admire regarding his actual ability, as he’s fast, powerful and has a lot of weapons on the feet, whether it’s his thunderous low kicks, hard-hitting punches or launching into fight-ending flying knees.

Font is a talented boxer and has 2″ in height and 4.5″ in reach over Moraes, which will aid his solid work behind the jab.

Font’s offense isn’t as versatile as Moraes’ though and I think ‘Magic’s’ leg kicks at distance and explosive speed to get into range will also pay dividends here, leading to a second round TKO stoppage.

Prediction: Marlon Moraes to win by TKO in Rd2.

After a less-than-impressive start to his UFC career, Hardy is finally starting to find his feet in the Octagon and has logged two wins in a row so far in 2020.

Hardy has developed the fundamentals of a kickboxing game and he definitely has big power in his punches, though early in his UFC run he would overload on that and gas himself out. He then became far more cautious, but seems to now be finding a better balance as he matures as a fighter.

Now he faces his first step up in competition since a unanimous decision loss to Alexander Volkov late last year, as he takes on the far more experienced Tybura, who is riding a three-fight winning streak and coming off a decision win against Ben Rothwell a couple of months ago.

A former M-1 heavyweight champ, Tybura is a solid all-rounder with capable striking along with grinding clinch work and wrestling, but before his recent winning streak his chin was compromised during a spell in which he lost three out of four fights, with each defeat coming by way of strikes.

This is a big challenge for Hardy as up until now he’s faced a lot of guys who were willing to just stand and trade, but Tybura will test him in the clinch and on the mat and that’s likely to expose weaknesses in his game and limit his opportunities to work his striking. It’s possible Tybura picks up a submission win here, but I’ll take him to just play it safe and grind out a decision victory.

Santos was supposed to fight Montana De La Rosa recently, but when her opponent was left unable to compete, the Brazilian was drafted in to fight Robertson instead.

Truth be told this isn’t too much of a change-up for Santos as Robertson is similar to De La Rosa, being a ground specialist with a strong submission game.

As for Santos, her game is based around her very solid muay thai striking and she actually showed some significant stopping power on the regional circuit. Robertson has been trying to develop her own stand-up, but I don’t see this being the fight to test that out for long periods as she’s likely to come off second best.

So really this one comes down to whether Robertson can get in on Santos and control her on the mat. I’m torn on this one as there’s clear routes to victory for both fighters. However, I think there’s a chance that Santos can use her 5″ reach advantage, power and athleticism to ward off Robertson’s takedowns in the early stages of the fight and then outstrike her in the stand-up exchanges to earn a decision victory.

Rick Glenn vs. Carlton Minus