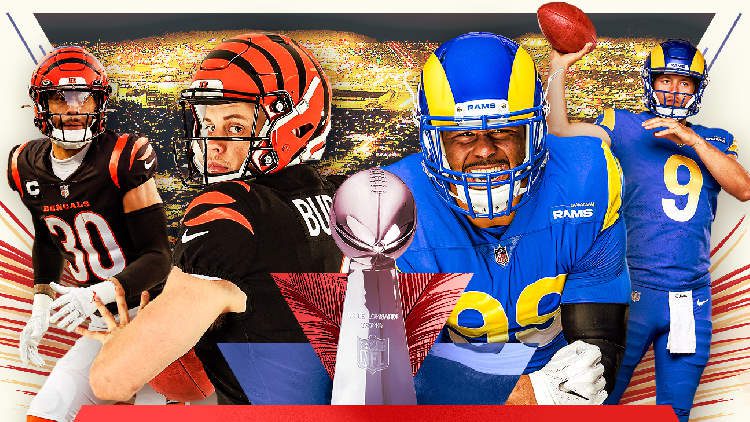 We have expert betting predictions for the Super Bowl between the Los Angeles Rams and Cincinnati Bengals.

It’s the Super Bowl not many people expected. Odds for the Rams and Bengals to make Super Bowl LVI were around $151, so it’s a nice change from the powerhouses making the big dance.

We preview the Rams vs Bengals and look at where punters can find the best value.

Despite only just making it into the playoffs, the Cincinnati Bengals now have a legitimate chance of winning the Super Bowl.

Joe Burrow has been incredible and he’s the difference between the Bengals being a success and a failure. His offensive line has been relatively poor, which hasn’t made easy for the second-year pro.

He is constantly under attack and having to escape the pocket, which is a concern against a scary Rams defensive line, including Aaron Donald, who many believe could take Super Bowl MVP if the Rams win.

However, despite getting constantly hounded, Burrow has produced two masterful playoff performances. The Bengals defeated the Tennessee Titans 19-16 on the road before travelling to Kansas City where they defeated the Chiefs 27-24 in overtime.

Both wins were incredible performances and it holds them in good stead against the Rams, who have also been impressive.

Matthew Stafford is finally playing for a quality team and it has shown. The former Detroit Lions quarterback has thrown 41 touchdowns and 17 interceptions, so he has been an elite passer.

Most of the Rams’ damage comes through the air, as they average only 99 yards rushing per game. However, the same goes for the Bengals, so punters should expect a heavy dose of passing attack.

The Rams are a team without the fan base of the Bengals, but playing at home is ideal. They know the conditions at SoFi Stadium well, and it’s ideal conditions for offensive-minded football.

They opened their playoff campaign with a dominant 34-11 win over Arizona in the Wildcard Game. They then defeated last year’s champions Tampa Bay Buccaneers 30-27.

It looks like a good win over Tom Brady’s Buccaneers, but the Buccaneers were short-handed. It became a shootout after the Rams held a big early lead, so they’ll need to finish stronger.

Los Angeles then got the better of San Francisco 20-17, which was closer than it should have been.

The sportsbook has the Rams at $1.49, which is surprisingly short. They’re a more public-heavy betting team than the Bengals, but we thought the line would be around $1.70 for the Rams.

Punters are getting excellent value with the Bengals, who has continued to defy belief. There is a sense of destiny with this team and we’re happy with the $2.64 available.

Punters can also get +4 at $1.91. There is more insurance with this bet, but given the value in moneyline markets, we’re taking the risk.

We expect Burrow to have another outstanding performance and Joe Mixon could also be a huge factor at the running back position.

We all love a first touchdown scorer wager and there are many excellent options available.

We think the Bengals have the best chance of scoring a six-pointer first, and we’re keen on Ja’Marr Chase and Tyler Bord.

Chase is the best wide receiver playing in the Super Bowl. He is often double-teamed, which makes it harder to score, but he’s an outstanding receiver with a huge vertical leap.

We expect Burrow to throw an early high ball into the end zone for Chase to come down with. Punters get $9.50 for Chase, which is an excellent price for a quality player.

The current favourite is Cooper Kupp for the Rams. However, we think the Rams could struggle to get down the field in the early stages of the game.

We also like Tyler Boyd, who scored only five touchdowns in the regular season, but what better way to make an impact?

The first touchdown scorer in the Super Bowl is often someone out of left field, so take Boyd as a saver bet.

For the Rams, we like Tyler Higbee to score a touchdown at any time. He is paying a healthy $3.75 to score a TD, and because Odell Beckham Jr and Kupp will be double-teamed, it could allow Higbee to be wide open.

Be sure to check out our Super Bowl prop bets article, which features all the weird and wonderful markets available between the Rams and Bengals.