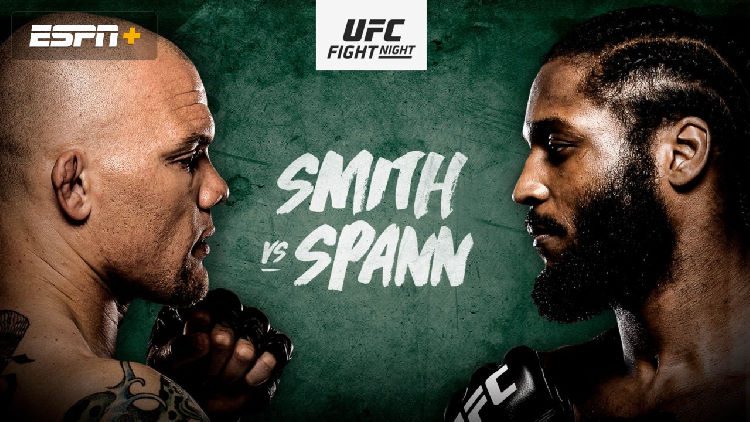 After a couple of losses, No.6 ranked light-heavyweight Smith has managed to rebound with back-to-back first round finishes in the past 12 months and now takes on the No.11 placed Spann, who has won five of his six fights in the UFC so far.

Both men are dangerous wherever the fight goes. On the feet Spann is hard-hitting and has a 1″ height advantage together along with anything from 3″ to 5.5″ in reach (depending on which site you take the stats from) over Smith to aid his striking on the outside.

Smith is also a proven finisher on the feet who will land punishing kicks to the legs, body and head along with his punches, while he’s also durable, which is just as well as he does tend to eat a fair amount of strikes in return at times.

Spann’s wrestling could be a significant factor here as Smith’s takedown defense is also not the best, but on the mat ‘Lionheart’ is a very capable grappler, so Spann wouldn’t have it all his own way there, despite his own ground skills.

Smith has the better cardio of the two, and that could be an interesting factor if the fight goes into the later rounds as Spann tends to finish early or not at all, while ‘Lionheart’ remains potent from start to finish.

Overall it’s certainly a close fight, but I think Smith’s toughness and experience will enable him to see out the first couple of rounds, even if he has to fight off his back for some of it, and from their on I do think he can begin to take over, proving to be the more effective striker of the two and hurting Spann, before submitting him on the mat in the fourth round.

Prediction: Anthony Smith to win by submission in Rd4.

With only one win from his last five fights, the pressure is on Cutelaba to get back on track in the co-main event against Clark, whose submission loss to main-eventer Anthony Smith last time out ended his two-fight winning streak.

For a long time now it’s been established that Cutelaba is a very dangerous fighter in the opening round, but he fades as the fight goes on if he doesn’t find the finish he’s going all-out for, and it doesn’t seem like that’s a trait that’s going to change.

So, expect ‘The Hulk’ to come out aggressively early in the fight throwing heat with every punch in search of a knockout finish, while he can also work for brute-force takedowns to set-up his equally powerful ground-and-pound.

On the other hand, Clark is not a big finisher and isn’t as much of a threat on the feet as his opponent, but he does have solid wrestling and has won the vast majority of his fights on the scorecards, so if he can weather the early storm here then he has a really good chance to gain the upper-hand in the later rounds.

Cutelaba’s kill-or-be-killed style has more of a chance of working here since he doesn’t have to be overly concerned about the firepower coming back at him, which has been his downfall in the past. However, though Clark has been finished by strikes a couple of times, recently it’s been his submission defense that’s been his Achilles heel, and I don’t see that being an issue here.

So, the path to victory is clear for both men here and that makes it a tricky one to predict, but I’ll take Clark to survive the early onslaught and utilize his wrestling to wear out Cutelaba and secure the decision win.

Initially on the prelim card, this fight moves up to fill a gap on the main card with both Maness and Gravely coming in off back-to-back wins in the promotion.

Gravely is giving up 5″ in height and 3″ in reach to Maness here, but he is a wrestling powerhouse who will continually look for big takedowns and he also drops bombs with his ground-and-pound attacks. The downside of all that however is that his cardio can become compromised later in the fight from all that activity, while he’s also been somewhat susceptible to submissions over the years.

Maness is a fairly solid all-rounder who doesn’t necessarily stand out in any particular regard, but will like the size advantage on the feet and coming off a submission win he’ll be eager to test his opponent’s defensive capabilities on the mat.

While Gravely’s submission weakness is a concern it has to be stressed that Maness isn’t regularly tapping people out, so it’s far from a given that he would do so here.

As such I’m still going to opt for Gravely as I feel certain he will have a significant amount of success with his takedowns and wrestling over the course of three rounds, while there’s been signs of improvements in his striking too, leading him to a decision win.

A fight that was recently postponed now takes place on this card as Lipski attempts to bounce back from two TKO losses in a row against promotional newcomer Bohm, who has a perfect 7-0 record including a win in the Bellator promotion last time out.

Despite her ‘Queen Of Violence’ nickname, it’s actually Lipski who has been the victim of two TKO losses in a row, but nevertheless she is a very capable muay thai striker with good speed and a solid clinch-game. Her ground game is a mixed bag though as though she can do some solid work with ground-and-pound on top and can lock up the occasional submission, she can be controlled when she’s the one on her back and so would much rather keep the fight on the feet.

Bohm does have the better wrestling of the two, but she doesn’t have the most stifling top control pressure. She is however also very effective in the clinch and is a capable striker who will have a 3″ reach advantage to work with here.

I think this will be a close, competitive fight, but I feel Lipski’s move to ATT earlier in the year could help shore up some of her weaknesses and give her a chance to live up to her potential. It’s not a confident pick, but I’m taking Lipski to get the better of the striking exchanges with her quicker, more technical offense and limit her opponent’s takedown opportunities to win by decision.

Two fighters who have been building momentum in the lightweight division clash here, with Tsarukyan having logged three decision wins in a row, while Giagos has two victories under his belt, including a ‘Performance Of The Night’ submission finish last time out.

Truth be told though, Tsarukyan is certainly the more hyped fighter at this moment in time, and for good reason, with only another top-flight lightweight talent in Islam Makhachev having bested him in the past five years.

Giagos has functional striking, but really his best work tends to occur on the mat, which could be a real headache for him here as while he’s very capable in that regard, Tsarukyan is still a much better wrestler and will chain his takedown attempts together and control the action on top.

Tsarukyan also has the better gas tank of the two and his grappling dominance is likely to only wear more on Giagos cardio reserves. I do think Giagos is good enough to survive the full fifteen minutes, but there won’t be a doubt about whose going to have his hand raised by that point.

Last year Buckley made a name for himself as a viral highlight-reel finisher, but unfortunately for him he then became the victim of a stunning KO stoppage himself at the start of this year and now will attempt to regroup against Arroyo, whose back is up against the wall after losing his two fights in the UFC to date.

The powerfully built Buckley’s boxing is his best weapon as he throws with speed and genuine power behind a high guard, but the 27-year-old has also been finished by strikes a few times in his career now, which is a cause for concern, and he’s not the most well-rounded fighter.

Arroyo is more versatile as he’s got a ground game to go alongside his striking skills, in particular via submission. He’ll have a 4″ height advantage, but is actually giving up 2.5″ in reach to his opponent.  He likes to operate from range with a low guard, will utilize solid kicks and has good footwork.

If it hadn’t been for Arroyo’s wholly unconvincing performances in the UFC so far there’d be a stronger case to make for him here, but even although there’s also increasing concerns that Buckley is something of a ‘glass cannon’, I think his opponent’s low guard could cost him here against Buckley’s speed and power, which will set him up for a second round TKO victory.

Prediction: Joaquin Buckley to win by TKO in Rd2.