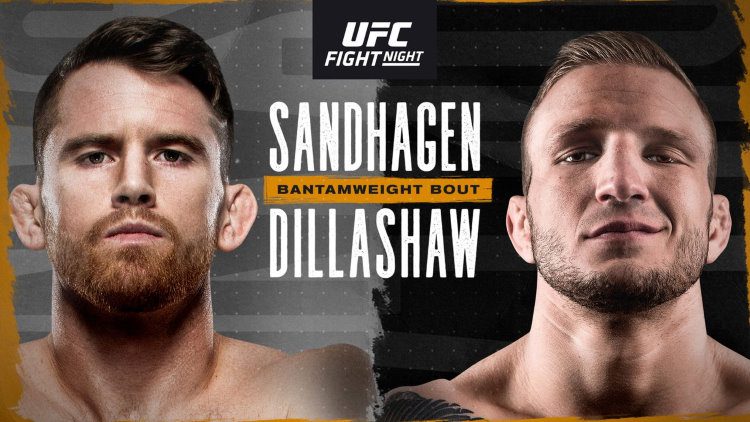 It’s been two-and-a-half years since Dillashaw last set foot in the Octagon for what proved to be a disastrous attempt to become a two-division champ as he dropped down to flyweight and was promptly TKO’d in just 32 seconds by Henry Cejudo, then tested positive for EPO and received a two year ban.

Sandhagen actually fought that same night back in early 2019, picking up his third UFC win in a row, and he’s continued to look good in the years since, having now compiled a 7-1 run in the Octagon, and is coming off back-to-back wins via strikes against Marlon Moraes and Frankie Edgar.

There’s certainly still a cloud hanging over Dillashaw’s head due to that positive drug test and the potential cardio benefits that EPO was giving him, but to be fair to him he was still a very talented fighter with good speed and footwork, very clean, accurate technical striking, while also being a very capable wrestler too. He is coming off a long layoff and is now 35-years-old though, so it’s going to be very interesting to see how he performs.

He’s certainly not been given an easy task for his comeback fight as the 29-year-old Sandhagen is in excellent form right now and has already got the better of various other 135lb striking talents with his slightly awkward, but nonetheless very effective striking style and proven ability to end fights.

Sandhagen holds a sizeable 5″ height and 3″ reach advantage over Dillashaw which further aids his cause, and he has a knack for unleashing well-timed knees, which could prove to be an effective weapon if Dillashaw attempts to work for takedowns.

This really is a fight that could go either way. I can definitely see the potential for Dillashaw to come back looking as good as ever, but it’s not guaranteed, and with Sandhagen having looked so good recently and possessing a bit more potency to his striking arsenal, as well as greater durability, I’ll take him to win by TKO in the third round.

Prediction: Cory Sandhagen to win by TKO in Rd3.

Ladd won her last fight against Yana Kunitskaya by TKO, taking her overall career record to 9-1, but that was back in late 2019 and she hasn’t fought again since due to suffering ACL and MCL tears in training, so this is a big test for her in her first fight back.

As for Chaisson, she also hasn’t had a fight in over a year, but is coming off two decision wins in a row against Shanna Young and Marion Reneau, and now gets a chance to fight a much higher ranked opponent, with Ladd still at No.3 in the division, while she holds the No.9 spot.

This is a clear clash of styles as Chiasson is primarily a striker and should hold a very significant advantage there against Ladd, who doesn’t have a great deal to offer on the feet, but is a real force on the mat via both ground-and-pound and submissions.

Chiasson has a big 5″ height and 6″ reach advantage here, so that will only further enhance her ability to outstrike Ladd, while also giving her valuable space to work with as she tries to keep the grappler at bay.

I am concerned about how Ladd’s recent injuries will affect her, but in the past she’s kept a relentless pace and if she can maintain anything like that upon he return then I feel she can exploit her superiority on the mat to secure a second round TKO stoppage via ground-and-pound here.

Prediction: Aspen Ladd to win by TKO in Rd2.

Paiva’s weight issues really caught up with him in the last year, first missing weight for his last fight at flyweight, then having to pull out of a match-up back in May after passing out and waking up in hospital due to a weight cut can bad.

Now Pavia’s fighting at bantamweight, where he has competed at numerous times in the past, though not so far in his 3-2 UFC run, and so he won’t have the kind of size advantage he enjoyed at 125lbs, in addition to the fact he’s taken the bout on only a month’s notice.

Paiva is a good striker though who works well on the counter and has a submission game if needed, but while he’s had his moments in recent years, the 25-year-old is not generally known as a big finisher.

Meanwhile, Phillips has edged into the bantamweight rankings after three UFC wins in a row, and the 26-year-old has shown real promise with a well-rounded game that comprises of slick striking mixed in with well-timed takedowns and good grappling.

I like Phillips to win here as he has the more potent, dynamic striking and can mix things up nicely on the mat too, while Paiva’s recent illness due to weight cutting also rings an alarm bell, so I’ll take ‘Matrix’ to have the upper-hand here on his way to a decision victory.

A grizzled veteran of the sport, the 37-year-old Elkins managed to turn around a four-fight losing streak last time out when he picked up a submission win against Luiz Eduardo Garagorri, while Minner has earned back-to-back victories after initially losing in his UFC debut last year.

Elkins has taken a troubling amount of “Damage” over the years, but there’s no quit in him and his grinding style and solid wrestling still makes him an opponent not to be taken lightly.

Minner has an aggressive style and a very impressive finishing record by submission, ending 22 of his 26 career victories in that fashion, although despite his offensive grappling prowess it should also be noted that he has been tapped out himself eight times over the years.

Minner is giving up 3″ in height and 1.5″ in reach to Elkins, but he’s the younger, fresher fighter and I think he can win the grappling battle here, but he’ll have to settle for going to the scorecards to get his hand raised.

Two young guns of the women’s flyweight division clash in this main card bout as the 24-year-old Maverick seeks to build on back-to-back victories since joining the UFC, while the 23-year-old Barber attempts to rekindle her early promise after slumping to two losses in a row.

Despite her relatively young age, Maverick has developed a good set of skills, offering up  combination striking on the feet and strong grappling, with the majority of her wins so far coming by way of submission.

Barber matches up well with her as she’s a heavy-handed striker with fight-ending power, while her wrestling and ground-and-pound also make her a significant threat on the mat too.

However, a problem for Barber is that she can lean too much towards her power at the expense of technique at times, which she can get away with at a certain level, but as the standard of opposition increases it becomes more of a problem.

At 23 she’s clearly still evolving as a fighter though, so Barber could well still up to her ‘The Future’ nickname. As such I’m wary to pick against her, but Maverick shows a lot of promise too, and I can see her being a bit more technical and cool-headed in the heat of the battle here, which will lead her to a close decision victory.

A UFC fighter from very early in his career, Gall has been alternating between wins and losses for his last six fights, while Williams was a three-time Contender Series veteran before finally making his official debut last year, which he lost by unanimous decision against Nassourdine Imavov.

Williams is stepping down to welterweight for this fight and is a very offensively minded striker with notable finishing power in his punches, but at the same time he lacks discipline defensively.

On the other hand, Gall is a crafty fighter on the mat with his jiu-jitsu, but there’s a sense that the 29-year-old still hasn’t really developed a reliable striking game to go alongside it, and his recent losses to past-their-prime veterans like Mike Perry and Diego Sanchez don’t inspire confidence.

As such I don’t see Gall really being able to exploit Williams defensive lapses on the feet, and think he’ll find himself being overwhelmed by the early offensive pressure and then succumb to a second round TKO stoppage.

Prediction: Jordan Williams to win by TKO in Rd2.