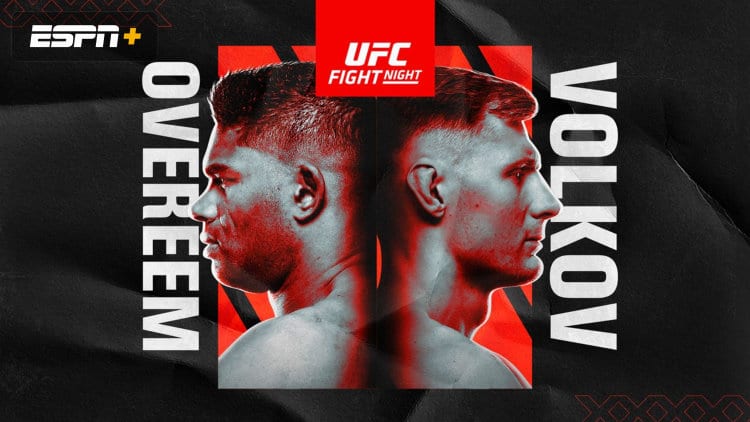 This is a very intriguingly balanced fight, with Overeem attempting one last title push at 40-years-old before retiring, while at 32-years-old Volkov still has a lot of fights left in him and could well compete for the belt at some stage.

The striking battle here will be fascinating as the lanky Volkov fights very well from range, but on this occasion, while Overeem is 3″ shorter, he actually has the same reach as the Russian. Nevertheless, Volkov does mix in kicks nicely to his combination striking and while he’s not necessarily a devastating one-shot KO artist, his volume can take a big toll on his opponents over time.

Like Volkov, Overeem is an excellent striker and he does carry big finishing power, but at the same time he’s been stopped an alarming number of times over the course of his long career, which is always a cause for concern. Overeem’s style has adapted to that and he often goes into a tight defensive shell if he’s in danger.

Another adaptation he’s made late in his career is that he seeks out opportunities to use his wrestling more and that can prove to be very effective as he has brutal ground and pound and can pull off submissions too. Volkov definitely won’t want any part of that, which makes his distance management even more important, though his kicks may leave opportunities for Overeem to exploit.

This is a tough one to call. Volkov isn’t as fragile as Overeem and his combination striking from range could leave his opponent playing defense a lot, but ‘The Reem’ is still a potent striker who can change the course of the fight in an instant. It’s his ground game that I feel is Overeem’s best route to success here though and so I’m going to take him to utilize that and win by a ground and pound stoppage in the third round, but I can’t claim that it’s a confident pick at this late stage in his career.

Prediction: Alistair Overeem to win by TKO in Rd3.

A consummate professional, even at 39-years-old Edgar is still in great shape and capable of giving anyone he goes up against a tough fight, as proven last time out when he beat Pedro Munhoz on the scorecards, albeit very narrowly indeed by split decision.

That being said, there are signs of time catching up to him, with losses in three of his last five fights, including two defeats by KO and TKO. Nevertheless, he still remains a handful on the feet due to his busy striking style that sees him constantly moving, using his speed to dart in and out of range to land his boxing combinations, and while his punches don’t carry a great deal of power, the sheer volume and tireless nature of his offense has won him many a fight on the scorecards.

In Sandhagen he is facing a man who is more than a decade his junior, and someone who does carry more of a finishing threat, while also remaining very active offensively. 5″ taller than Edgar, though with only a 2″ reach advantage, Sandhagen has won six of his seven UFC fights so far, defeating notable names like John Lineker, Raphael Assuncao and most recently Marlon Moraes along the way, the latter of whom he TKO’d with a spinning wheel kick.

At this stage in his career I’d like to see Edgar take a leaf out of people like Alistair Overeem and Glover Teixeira’s book and make more use of his very good wrestling ability. Even more-so than either of them, Edgar transitions slickly between his striking and wrestling, and though Sandhagen does have a submission game, I think he’d be outmatched by ‘The Answer’ on the mat.

With that in mind it’s surprising to see Edgar quite such a heavy underdog here. I can certainly see a route to victory for him here, but at this stage in his career when he’s not quite as durable as in the past I will lean towards Sandhagen making the most of his height and reach advantage together with his more potent striking to at least rock Edgar and put him in danger. Without the benefit of five rounds to stage a late comeback with his tremendous cardio and never-say-die attitude, that will cost Edgar dearly on the scorecards.

It’s been a year since we last saw the 29-year-old Chiasson improve her record to 6-1 with a decision win over Shanna Young. Meanwhile, the 43-year-old Reneau has suffered three unanimous decision losses in a row in the past three years.

To be fair to Reneau, those defeats all came against tough competition in Cat Zingano, Yana Kunitskaya and Raquel Pennington, and despite her advanced years, she’s still a good athlete, has solid striking and very good submission skills.

Chiasson has significantly less experience, particularly against top-flight competition than her opponent, but she will head into this one with a 3″ height and 4″ reach advantage, and she actually started her career up at featherweight.

Chiasson could use that to try to outstrike Reneau from range, though she is also effective working from the clinch too. I don’t think it would be wise for her to tangle with Reneau on the mat though, and if she can keep this one standing I think she can edge her way to a win on the scorecards.

Pantoja has picked up a couple of decision losses in his last three fights, but it’s telling that he still holds down the No.5 spot in the division as he remains a very good fighter with an overall 6-3 record in the Octagon so far.

Meanwhile, Kape makes his debut after a long run in the Rizin promotion that ended in a three-fight winning streak, earning a lot of good experience against solid competition along the way with wins over the likes of Ian McCall, Yasuka Nakamura and Takeya Mizugaki.

The 30-year-old Pantoja is well-rounded, combining dangerous striking with very good jiu-jitsu to provide a significant finishing threat wherever the fight goes, while he’s never been stopped inside the distance in his 27-fight career.

This should be a fun match-up as the 27-year-old Kape also offers up big power on the feet as well as having his own submission arsenal. That being said, Kape has been tapped out a couple of times in the past and I think he’ll be looking more towards his striking than his grappling here.

A win for either man would be no surprise here as it’s a well-matched fight, but I feel Pantoja can match up well with Kape on the feet, while also having the edge on the mat, and I’m going to take a combination of the two to set him up for a second round submission finish.

Prediction: Alexandre Pantoja to win by submission in Rd2.

Askar (not Askarov!) comes in on less than a week’s notice here to make his debut against Stamann, who is currently ranked No.13 at bantamweight.

Askar is coming off a win in the LFA promotion back in October of last year and has an 11-1 record overall. Askar is primarily as striker and has a 5″ reach advantage here. He’ll swing for the fences at times, but he’s also a fairly competent wrestler too.

However, he’s going to have a tough time in the wrestling department against Stamann, who excels in that area and also just has a great deal more high-level experience.

Given that Stamann lost his last fight by decision against Jimmie Rivera, I’d expect him to be eager to ensure he gets safely back into the win column as he grinds out a decision win here on the mat.

This is an exciting main card opener with Ferreira coming in off a six-fight winning streak that culminated with a submission stoppage of Anthony Pettis in January of last year, while Dariush is in equally fine form thanks to his five-fight unbeaten run, including back-to-back KO wins in his last two outings.

Dariush actually already holds a 2014 win over Ferreira in the UFC, demonstrating his strong wrestling ability to secure a decision win on that occasion. It’s interesting that in more recent times Dariush has been finding so much success on the feet of-late as it was only a few years ago that there were real concerns about his chin after suffering two KO losses in the space of a year.

The evolution of his striking makes him an even more dangerous, but nonetheless I do think he’d be wise to not fall in love with his hands too much and neglect his ground skills.

Ferreira will certainly be looking to test him wherever the fight goes. While he doesn’t have the same calibre of wrestling as Dariush he has very good BJJ, but like his opponent here his striking has also developed very nicely over the years and his pressure-heavy style has clearly been paying dividends.

Overall, It’s definitely a match-up to look forward to. I’m taking Dariush as his striking improvements have been impressive – not just becoming more comfortable on the feet to compliment his grappling, but actually becoming a significant threat there. That bodes well, but I do feel he would do well to utilize his wrestling here to help ensure he emerges victorious on the scorecards against a tough opponent like Ferreira.