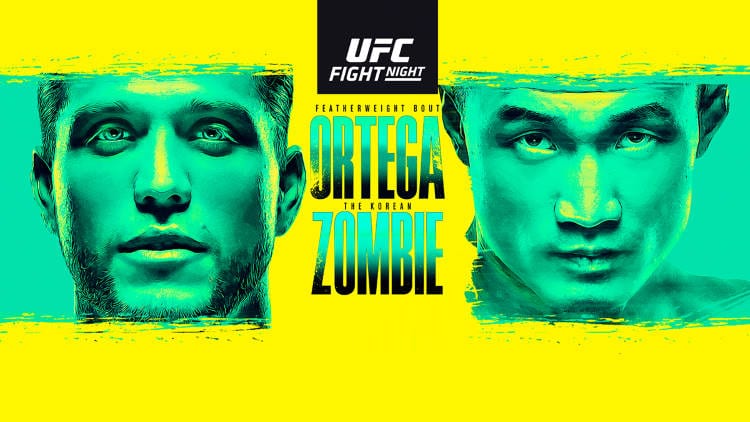 What a great fight to end the night we have hear between these two top-flight featherweight talents who have what it takes to deliver a thrilling spectacle.

It’s a shame that it’s almost been two years since Ortega last fought though and this is a tough follow-up fight after the brutal, sustained beating he suffered against Max Holloway back in December of 2018 – the kind that can take a lasting toll on a fighter physically and mentally.

Up until that fight Ortega had been on fire, demonstrating some of the most dangerous BJJ in the game and improving stand-up that led to a KO finish against Frankie Edgar, but Holloway showed that there are levels to the striking game and so it’ll be interesting to see what adjustments ‘T-City’ has made to his stand-up during his time out and where his head is at.

With his all-action, high tempo offensive style and finishing power, ‘The Korean Zombie’ is well equipped to give the worryingly hittable Ortega a very tough test on the feet here, but the extra layer of intrigue here is that he is also a very capable grappler too and so won’t be phased if the fight hits the mat.

I do think Ortega is something special on the mat with his submission prowess, but I think he’s going to struggle to get Jung down, nevermind also keep him there long enough to tap him out, while on the feet he’s going up against superior firepower. Throw in the long layoff and the fact his mentor Rener Gracie isn’t going to be in his corner due to having Covid and it seems to me that ‘The Korean Zombie’ has a good chance of emerging with a win here by TKO in Rd3.

Prediction: Chan Sung Jung to win by TKO in Rd3.

Gane may only be six fights into his heavyweight MMA career but he’s already been marked out as one to watch with his imposing, athletic physique, powerful striking and a nice submission game to go with it.

With three wins under his belt so far in the UFC, Gane now goes up against a newcomer in Delija, who comes in on a couple of weeks notice.

Despite that, Delija shouldn’t be underestimated as he has significant experience advantage here with a 17-3 record and is heading into this fight after compiling a trio of wins in respected promotions Rizin, PFL and KSW.

That kind of well-travelled experience suggests Delija won’t be overawed by the occasion and like Gane he has shown he can be a threat both on the feet and on the mat.

So it’s a fight that Gane can’t take lightly, but I do think that it’s one he can win as I anticipate him having the edge wherever the action goes, and with his harder-hitting, more accurate offense I believe he’ll emerge with a second round stoppage victory here.

Prediction: Ciryl Gane to win by TKO in Rd2.

After two losses in a row at the top of the strawweight division, Andrade is now heading up to flyweight for her next fight against Chookagian.

Going up a division may seem surprising at first given that Andrade’s small stature and indeed she’ll be giving up a whopping 8″ in height and 6″ in reach to her opponent on Saturday night, but it’s also worth remembering that she actually spent the first 18 fights of her career competing up at bantamweight and went a very respectable 13-5 during that time.

Despite her size, Andrade hits hard, is very strong and has surprisingly excellent cardio that lends itself well to her fast-paced, aggressive style, whether swarming oppponent with punches or going for powerful takedowns.

Chookagian on the other hand is also a seasoned veteran who doesn’t have much in the way of power, but she’s a solidly skilled volume striker and will be hoping that her sizeable reach advantage will help her to keep Andrade at the end of her punches.

The problem is that Andrade is exceptionally tough mentally and physically and as such will likely wade through much of Chookagian’s offense in order to close the distance, at which point the Brazilian can either land much more telling blows or overpower her opponent to the mat.

Only Valentina Shevchenko has been able to stop Chookagian inside the distance in her 17-fight career and I think she’ll make it to the final bell here, but Andrade will emerge as the winner.

Australia’s Crute goes up against ‘The Baltic Gladiator’ Bukauskas here, who made a successful start to his UFC career back in July with a first round TKO finish to extend his unbeaten run to seven fights.

Bukauskas is a hard-hitting kickboxer with a good record of finishing opponents and will have a 1″ height and 4″ reach advantage to work with on Saturday night.

Crute has only lost once in his 12 fights to date though and he’s a hard-worker who will have a significant grappling advantage here, with solid takedowns and good submissions.

Crute is well-rounded enough to be able to hold his own the feet at times here, but he’ll be looking for takedowns and I think he’ll get them and secure a second round submission win.

Prediction: Jimmy Crute to win by submission in Rd2.

Martinez comes in on short notice here to fight Almeida, who has been absent from the Octagon for over two-and-a-half years.

Almeida was highly thought of when he first came into the UFC, racking up three wins in a row inside the distance thanks to his dangerous muay thai striking, taking his career record to an impressive 20-0, but he then experienced a rough spell in which he suffered three losses in four fights, followed by suffering from vision issues that have led to his long layoff.

As for Martinez, he’s not had the same kind of fan-fare as Almeida during his UFC run to date, which has seen him muster a 3-2 run, but like his opponent he’s also an effective striker who has been finishing fights with muay thai knees and elbows in recent times.

Almeida’s durability and long layoff are definite concerns here and make this one tricky to predict. However, it has to be remembered that he was fighting a higher level of competition than Martinez has faced when he suffered his losses and if he’s not got too much ring rust then I think he’ll have the edge over his opponent here and serve up a reminder of his potent offense by securing a second round TKO stoppage.

Prediction: Thomas Almeida to win by TKO in Rd2.