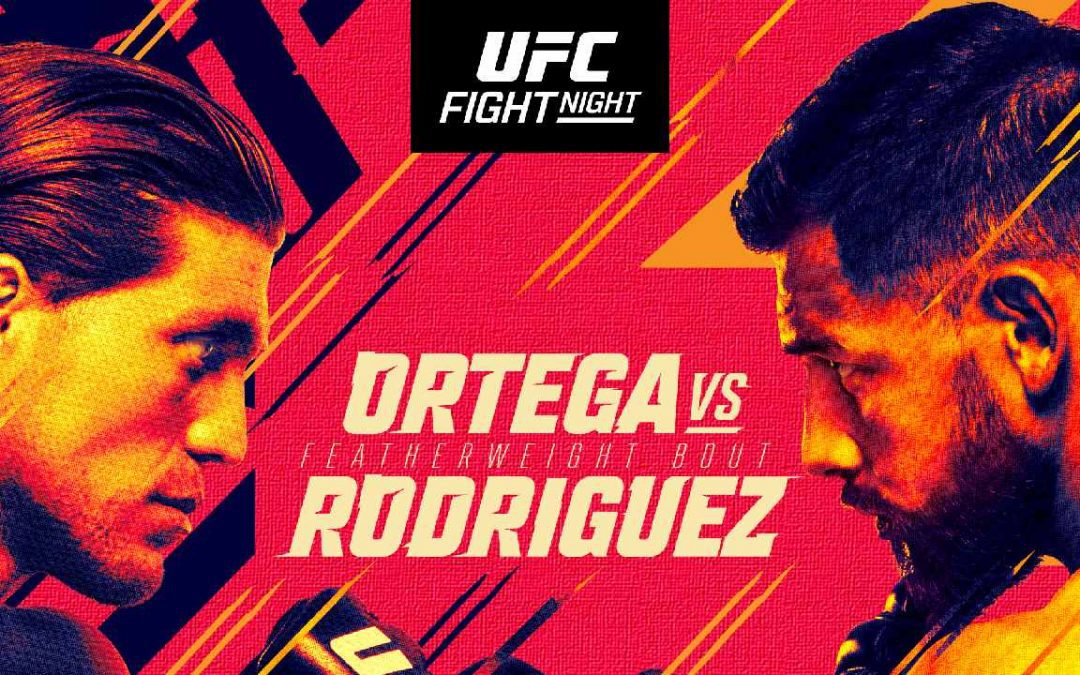 Ortega has lost two of his last three fights, but they came via title shots against divisional kingpins Max Holloway and then later Alexander Volkanovski.  Meanwhile, Rodriguez is coming off a decision loss against the aforementioned Holloway and before that had picked up wins over Jeremy Stephens and ‘The Korean Zombie’.

At it’s core this could be seen a striker vs. grappler match-up, but Ortega has levelled up his striking considerably since his one-sided beatdown against Holloway.

That being said, even though Ortega is also extremely durable (and some would say just downright too tough for his own good at times), it would be a risky strategy if he opts to stand and trade with Rodriguez, who is an extremely dynamic striker who can not only conjure up all kinds of creative and eye-catching striking techniques in the blink of an eye, but is actually unusually effective with them too.

Rodriguez ground game is not nearly as strong though, something that Frankie Edgar was able to expose as he easily took him down and sunk in a submission finish to hand him his first UFC loss a few years ago.

Ortega’s submission game is excellent, but his wrestling is certainly not anywhere as good as Edgar’s, and so figuring out that transition between striking to get the fight to the mat is going to be a big challenge for him.

In the end though I still cautiously favor Ortega here as he’s not completely out of his depth on the feet these days and meanwhile he may only need one opportunity on the mat over the course of five rounds to get the job done via submission, so I’ll take him to lock one up by the third round.

Prediction: Brian Ortega to win by submission in Rd3.

Waterson comes in to this match-up with just a single victory from her past four fights, while Lemos’ five-fight winning streak ended last time out with a submission loss to Jessica Andrade.

Waterson has always been fairly small even at strawweight, and in this fight she’s going up against a fighter in Lemos who actually spent the first few years of her career fighting at bantamweight and will have a 1″ height and 3″ reach advantage here.

Lemos has good stand-up ability and carries real power in her strikes too, offering up an impressive finishing record to prove it, with seven stoppages via strikes from 11 career victories – a rarity in this weight class.

Meanwhile, Waterson is much lighter on her feet and likes to stay mobile and utilize kicks from range, but she doesn’t carry much in the way of power. She is well-rounded though and is a significant threat via submission and can wrestle too.

Lemos’ submission loss last time out will give Waterson hope, but she doesn’t have Andrade’s bullish strength and I think her size disadvantage will make life difficult for her against a strong opponent like Lemos, while the Brazilian’s harder-hitting striking will ensure she lands the more damaging blows over the course of three rounds to emerge with a decision victory.

Jingliang suffered a quick submission loss to Khamzat Chimaev last time out and now goes up against another in-form fighter in Salikhov, who has put together a five-fight winning streak in the UFC.

Despite that solid winning run, Salikhov hasn’t generated a great deal of momentum in terms of a push into the welterweight rankings due to the fact that for most of his UFC career so far he’s only been fighting once a year. He’s also no longer in his prime at 38-years-old, but ‘The King Of Kung Fu’ remains a talented, composed striker who fights at a measured pace and stays defensively sound, while wielding knockout power in both his kicks and punches. He’s also never been finished by strikes in his 18-2 MMA career.

The 34-year-old Jingliang is more of an aggressive pressure striker who will engage in higher-volume attacks and does deliver significant power behind his strikes that can end fights, while he can also transition into takedowns too. Like his opponent, Jingliang has the distinction of never been stopped by strikes.

It’ll be interesting to see how this one plays out. I can see Salikhov making his strikes count and landing with authority, but I think he might find Jingliang’s pace and pressure will somewhat stifle hiw own offense opportunities, and with both men’s durability taking this fight to the scorecards I feel ‘The Leech’s higher intensity and activity will lead to a decision win.

Schnell’s been having a tough time of it of late with just one win from his last four fights, while on the other hand, Sumadaerji is on a three-fight winning streak.

Schnell is the more well-rounded fighter here as he has solid boxing, albeit without much in the way of stopping power, while he’s more potent on the mat with a good submission record to go along with his wrestling advantage.

The 32-year-old Schnell’s chin is a concern though as he’s been KO’d in the first round no less than three times in his UFC career so far, and he’s facing a dangerous striker now in Sumadaerji, who was finishing opponents left, right and center during his time fighting in China with everything from punches to the body to flying knees and even a spinning back kick, while he also holds a KO win since joining the UFC too.

Sumadaerji fights long and has very good footwork, which makes him an elusive target, and he’ll need that to steer clear of Schnell’s attempts to bring him to the mat, as all four of his career losses have come by submission, including one in his UFC debut.

So there’s clear paths to victory for both men here and I’m leaning towards Sumadaerji as I’m not convinced Schnell will be able to get the takedowns he needs to swing the fight in his favor, and with his suspect chin I’ll say he gets TKO’d in the second round.

Prediction: Sumadaerji to win by TKO in Rd2.

Burgos ended a two-fight losing run with a decision win last time out, while Jourdain comes in off back-to-back victories.

Two strikers here and Burgos has the size advantage, being 2″ taller and having a major 6.5″ reach advantage. That’s something he puts to good use as he has a boxing orientated style, working well to the body as well as the head and pushes a hard pace with constant offensive action.

The 31-year-old’s aggressive approach leaves him there to get hit in return though and while he’s generally very durable, he’s no stranger to being dropped and the alarming delayed-reaction KO loss he suffered against Edson Barboza back in May of last year isn’t easily forgotten.

Jourdain is also a fighter who will dish out strikes in volume, and while he doesn’t quite match Burgos’ output, he will offer a more versatile and dynamic approach with his kicks, while carrying potentially fight-ending power in his punches. He’s also the younger fighter at 26 here and has never been stopped by strikes.

So both men can absorb a good amount of punishment and that leads me to feel that this one will most likely end in a decision, and in that scenario I do favor Burgos to be able to make the most of his forward pressure and boxing combinations to outstrike his opponent and earn a win on the scorecards.

After a loss in her title challenge against flyweight queen Valentina Shevchenko last year, Murphy now heads into another big fight against a former bantamweight champ in Tate, who drops down to 125lbs after suffering a unanimous decision loss against Ketlen Vieira.

So, two fights into Tate’s comeback after a lengthy 4+ years in retirement, it’s been something of a mixed bag, with her striking appearing to have improved considerably during a TKO win over Marion Reneau, though some of that seemed to fade away rapidly when things weren’t going her way against Vieira.

However, Tate can fall back on the fact that she’s always been a strong wrestler who can control the action on the mat, works well in the clinch and poses a submission threat.

In Murphy she’s facing a tough, experienced veteran with a solid skill-set who has capitalized on her grit and determination to exceed expectations at times, but I do feel that this is a fight where Tate will feel comfortable contending with her on the feet, while also having the advantage on the mat too, and between the two she’ll emerge with a decision win.