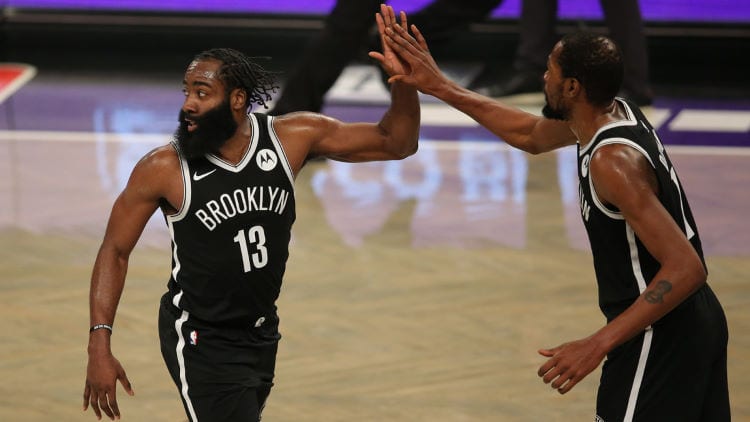 There are three quality games on the NBA Friday card, including the highly anticipated Bucks vs Nets, Jazz vs Raptors and Hawks vs Lakers.

The Milwaukee Bucks are quietly going about their business at 25-15, but no one seems to be talking up their title chances.

They are looking to turn around a two-game losing streak to Detroit and Toronto, which has largely been due to players being inactive. It has been a tough stretch for most teams due to Covid, but the Bucks have been hit hard.

Brooklyn is one win behind the Bucks in the Eastern Conference standings. The Nets suffered a three-game losing streak before beating Indiana 129-121. It was a much-needed win for Kevin Durant and James Harden, who are playing well.

Durant is averaging 30 points per game and they Nets need him to continue to deliver.

We’re expecting a tight game on Saturday, but because of the names missing for the Bucks, we’re taking the Nets to win.

The Nets won’t be liking their 10-9 record at home, so expect this to be a statement game from the favourites.

The Toronto Raptors are always capable of springing an upset result, which was the case against Milwaukee earlier in the week.

They have now won four on the bounce with victories over the Clippers, Knicks, Spurs and Bucks. That’s not an easy stretch, but the Raptors have knuckled down and they’re playing much better basketball.

Speaking of good basketball, the Utah Jazz are 28-10 following four wins from their last five games. They lost to Golden State 123-116, but rebounded to beat the Pelicans and Nuggets.

There is a slight injury concern with Rudy Gobert, which could leave the paint open for the Raptors’ guards. However, when Donovan Mitchell is playing as well as he is, the Jazz are tough to handle.

Mitchell is one of the most confident and underrated guards in the NBA. He is averaging 25.5 PPG and he could lead the Jazz past the Raptors.

We expect the sportsbook to have the Jazz as favourites and we wouldn’t be leaving them out of our NBA Saturday multis.

It was getting desperate for the Los Angeles Lakers, but they have found their groove with three consecutive wins.

The Lakers are moderately healthy now and it’s paying dividends. They scored wins over Portland, Minnesota and Sacramento, so although the level of opposition hasn’t been there, it should give them confidence.

They are traveling better than the Hawks, who are 17-20. The Hawks come off a win over the Kings, but consistency has been tough to come by.

Having the likes of John Collins and Bogdan Bogdanovic on the sidelines doesn’t help, but we haven’t liked the attitude of the Hawks all season.

They seem disinterested in playing regular season basketball, so we’re picking the Lakers to teach them a lesson. LeBron James could have another big night and playing at home should give them the edge on Saturday.