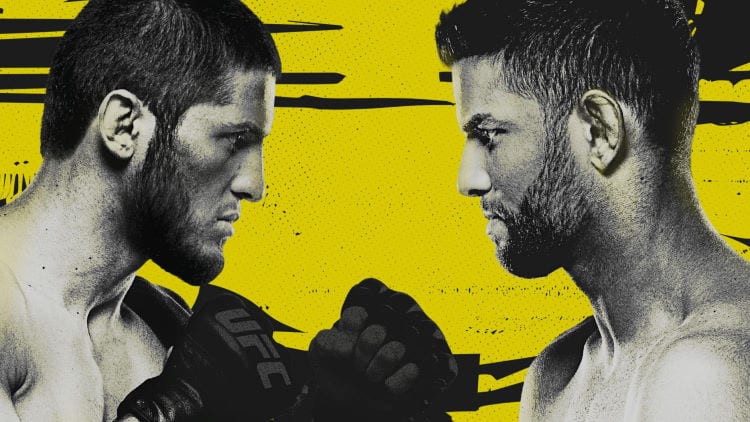 Khabib Nurmagomedov himself recently touted Makhachev as a future UFC lightweight champion, and like ‘The Eagle’ earlier in his career, he’s not exactly being fast-tracked to title contention, despite having won seven fights in a row!

It’s a bit puzzling that the UFC opted to pit him against Moises next, given that he’s in the lower reaches of the lightweight rankings, but nonetheless he has won his last three fights in a row, and against respected opposition too in Michael Johnson, Bobby Green and most recently Alexander Hernandez.

Like Khabib, Makhachev is an exceptionally dominant wrestler – so much so in fact that Daniel Cormier believes he actually surpasses the former kingpin in that regard. High praise indeed, but Makhachev is also comfortable on the feet, making him the kind of fighter that few in the upper reaches of the lightweight ranks will be eager to face.

Stylistically this seems like a tough match-up for Moises as while he is a good grappler in his own right and possesses a submission threat, it figures to be a long night for him if he tangles with Makhachev’s stifling wrestling ability, while I don’t see him being able to turn the tide on the feet either.

So, this looks like another classic Makhachev-style fight in which he controls the action with tireless takedowns and gives Moises no room to operate on the feet or the mat, leading to a decision victory.

It’s been some five years since Tate caught everyone by surprise by retiring from the sport immediately after a loss to Raquel Pennington, only nine months after she’d achieved her dream of lifting the UFC bantamweight title.

Since then she’s gone on to become a vice-president at Asian MMA promotion ONE FC and has had two kids, before finally rediscovering the urge to fight and getting in what appears to be excellent shape for her big comeback against the 44-year-old Reneau, who is heading in the other direction, having stated that she intends to make this bout her swansong from the sport.

In some ways this is something of a softball from the UFC to Tate as Reneau is coming off four losses in a row and is eyeing the exit door as time catches up with her at last. That doesn’t mean she’s a pushover though as she’s still in good shape and is the kind of seasoned, jack-of-all-trades fighter who will make Tate work for her win rather than coast to an easy victory.

Tate isn’t the most explosive fighter, but she has a very solid wrestling base, has solid enough boxing fundamentals and seems to have got in excellent shape as well as being much tougher than her ‘Cupcake’ nickname would suggest, so I think she will succeed in making a winning start to her comeback with a win on the scorecards here, but it won’t be a walk in the park.

After going winless in his last five fights against a string of tough 145lb opposition, Stephens tries to get back on track by returning to lightweight for the first time in eight years against Gamrot, a Polish fighter with a 1-1 record in the UFC so far, but an 18-1 record overall.

Gamrot is a very well-rounded fighter who has showcased some crisp striking and is coming off a confidence-boosting KO win against Scott Holtzman last time out, but also backs that up with a robust wrestling game too.

Stephens is primarily a striker and he has notable power, but is a bit more methodical these days and doesn’t just look for that one big fight-ending blow. His record in recent years is poor, but you have to take into account that he’s always being paired up with high-level opponents, and for the most part remains competitive.

Nevertheless, at 35, Stephens isn’t in his prime and the KO loss to Calvin Kattar last time out is a concern. He also can get outwrestled at times, and so Gamrot figures to have more than one way to win here, either on the feet or the mat. I think he’ll start with the former and switch to the latter if required here, and pick up a notable win over the veteran via decision.

Vieira is a decorated jiu-jitsu ace, but he received an unsightly blemish on his record last time out when he ran out of steam in the second round against Anthony Hernandez and ended up getting submitted himself.

Stoltzfus is also primarily a grappler and compiled a nice 12-0 record on the regional circuit prior to his official UFC debut, but lost by unanimous decision to Kyle Daukaus, leaving him to trying to secure his first win in the Octagon against Vieira.

In terms of pure skill there’s no doubt that Vieira is the better grappler, but with his muscular build there are definitely question marks about whether his achilles heel has now been exposed, and there’s no doubt Stoltzfus will be seeking to test that by taking him into deep waters here.

I think it’s entirely possible that could happen, but with a proven record of tapping out opponents in both MMA and top-flight Jiu-Jitsu, I’m taking Vieira to finish Stoltzfus on the mat before his cardio becomes an issue.

Prediction: Rodolfo Vieira to win by submission in Rd1.

Two entertaining featherweights here, with Benitez coming off a TKO win over Justin Jaynes, while Quarantillo suffered his first UFC loss with a decision loss against Gavin Tucker.

These two are capable of putting up a good fight wherever the action goes, but on the feet I favor Benitez as he works well on the outside and will utilize good leg kicks and target the body too, while also being sharp on the counter.

Quarantillo will look to push the pace and try to seek grappling opportunities, but I think he’ll have trouble closing the distance safely and will find it hard to get his opponent down and keep him there.

Stil, it should be a competitive fight, but one where Benitez’s more effective striking wears on Quarantillo and helps him secure a decision victory.