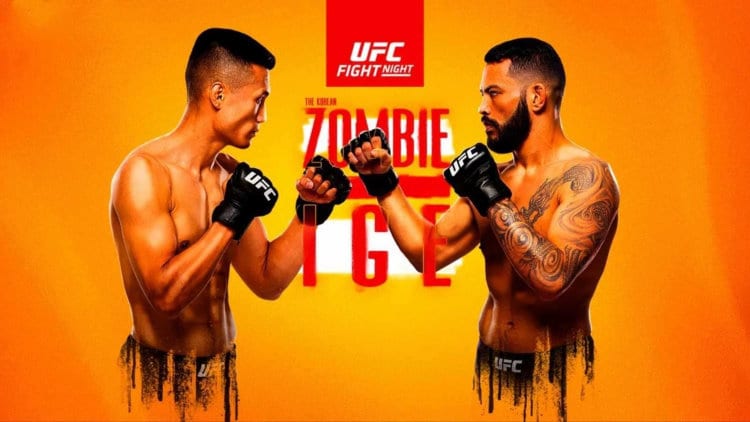 UFC on ESPN: The Korean Zombie vs. Ige Predictions

‘The Korean Zombie’ came off second-best via decision against Brian Ortega’s major striking improvements last time out, and now he’s seeking to get back to winning ways against Ige, who bounced back nicely from a decision loss to Calvin Kattar last year when he KO’d Gavin Tucker after just 22 seconds in March.

The Zombie is of course an all-action fighter who is very dangerous on the feet with his hard-hitting, high volume offense, though he does also eat a lot of strikes too along the way, and while he earned his nickname due to being able to absorb many of those blows, at 34-years-old his durability is starting to become more of a concern.

Despite his last KO victory, Ige isn’t generally known as the biggest puncher around, but he’s technically proficient, stays active offensively and has yet to be finished inside the distance in his 18-fight career to date.

Ige also does some of his best work on the mat, but while he’s best known for his striking, Jung is also a very capable grappler and has strong takedown defense, so he’s well equipped to cope with whatever his opponent brings to the table on the night.

Zombie’s last performance against Ortega was troubling as he never really seemed to get going, and if he shows up like that here then Ige certainly has the ability to emerge victorious. Still, even though I do question how much longer TKZ’s chin stays intact, I’m not ready to write him off after one disappointing outing. Instead I feel he’s the fighter with the greater firepower here and his ability to also handle himself on the mat leads me to believe he can edge out a close encounter here to win on the scorecards.

Back-to-back TKO losses have the soon to be 44-year-old Oleinik in a tough spot as he goes into a co-main event fight against Spivak, who has won his last two fights in a row.

It’s not the first time we’ve seen Oleinik suffer a couple of losses due to strikes and then get back to winning ways, but given his age and the way he’s reacting to being hit I do feel he’s become quite vulnerable on the feet.

With that in mind he’s likely to be relieved that he’s not facing a particularly ferocious heavyweight striker in Spivak, who has somewhat limited stand-up ability and is at his best on the mat with his solid wrestling and stoppage threat via both ground-and-pound and submission.

The problem there is that going to the mat means going into Oleinik’s world as his reputation as a predatory submission specialist proceeds him, with no less than 46 finishes on his resume to prove it. That being said, Oleinik probably does need Spivak to initiate the takedowns in the first place as I’m not convinced he can get there himself.

Overall I feel that even though he’s not the most comfortable or capable on the feet, the more durable Spivak should have some success striking against his aging opponent’s slow movement and weakened chin, while using his wrestling to stop the fight hitting the mat, which will lead him to a second round TKO finish.

Prediction: Sergey Spivak to win by TKO in Rd2.

Vera and Grant first fought back in 2016 at an early stage in their respective UFC careers, with the UK fighter coming away with a decision victory on that occasion.

Since then Vera has been the far more active of the two, going 9-4, while Grant has only gone 3-2, but with all three of those wins coming in a row over the past couple of years, he’ll come into this fight riding a wave of momentum.

Both fighters have improved significantly since that time, with Vera, who was only 23 back then, having now developed a solid striking game, with his leg kicks being a particularly effective tool to go along with his already proven submission skills and dependable cardio, while Grant’s in a similar boat, having almost exclusively relied on submissions to finish fights earlier in his career, but is now coming off back-to-back KO victories.

Grant certainly swings for the fences with his striking techniques, but he often overcommits offensively and can be a bit wild and not particularly cohesive with his output, so though his unpredictability and power make him challenging to deal with, I do feel like Vera’s more methodical pressure striking style, together with being very durable will stand him in good stead here.

Meanwhile, on the mat, though Grant has had considerable success tapping out opponents, he’s also been submitted himself on three occasions during his UFC tenure and once on the regional circuit, while Vera’s never been stopped in his career.

So, overall I think Vera, who is seven years younger than Grant, yet has significantly more fights under his belt, will demonstrate the improvements he’s made over the years by avenge his previous loss by decision here.

Turman has not had the greatest time in the UFC so far, losing two of his three bouts so far and then having to pull out of his next two match-ups due to Covid-19 and pneumonia respectively, while Silva’s been sat out of action for two-and-a-half years after signing for the UFC only to then be hit with a two year USADA following a positive test for a banned diuretic.

The UFC have stuck with Silva though, no doubt at least partly due to the fact that the imposingly built middleweight had an impressive record on the regional circuit, having finished 16 of his 19 victories by way of strikes, with opponents often crumbling under his pressure and punching power.

Given that Turman is coming off a first round KO loss and typically doesn’t deal with fighting off the back foot, that’s more than a little troubling. Turman may hope that after such a long layoff, Silva may punch himself out as the fight goes on, which could turn the tables in his favor as he definitely has the better gas tank.

However, Turman also has a solid submission game and that’s been Silva’s biggest weakness in the past, accounting for five of his six career losses, so that offers him a real window of opportunity.

I see clear ways for both men to win here, but I’m leaning slightly towards Silva here for the full-steam-ahead ferocity and thunderous power that will put Turman out of his comfort zone early in the fight and lead to a first round TKO finish.

Prediction: Bruno Silva to win by TKO in Rd1.

At 40-years-old and coming off back-to-back defeats, Brown will be looking to fend off retirement talk when he goes up against Lima, whose coming off a loss against Belal Muhammad, after having won his previous three fights.

There’s little doubt that Brown’s previously impressive ability to withstand damage has eroded in the later stages of his career as in the past he would typically only be stopped inside the distance due to his submission defense lapses, whereas back-to-back losses via strikes in 2016 together with concussion issues seemed to make him more vulnerable to being hurt and Miguel Baeza also capitalized on that last year with a TKO stoppage.

At the same time, we’ve also seen that Brown’s still the kind of rugged, gritty pressure striker who can be a big threat offensively with nasty punches, elbows and kicks, taking out fellow veterans Diego Sanchez and Ben Saunders by KO.

Lhima is the younger man at 32 and is a fairly solid all-rounder who may look to use his counter-striking and kicking game to punish Brown, but while it’s not been such an issue lately, it is worth noting that we have seen him finished several times earlier in his UFC run via KO and TKO.

If this was a few years ago I’d happily pick Brown by TKO, but durability and the fact he seems to be slowing down and emptying his gas tank quicker is a real concern now. So, I’ll take Lima to survive the early onslaught while chipping away at Brown with leg kicks and then take a firmer hold of the fight later on to emerge with a decision win.

UFC on ESPN: The Korean Zombie vs. Ige Prelims