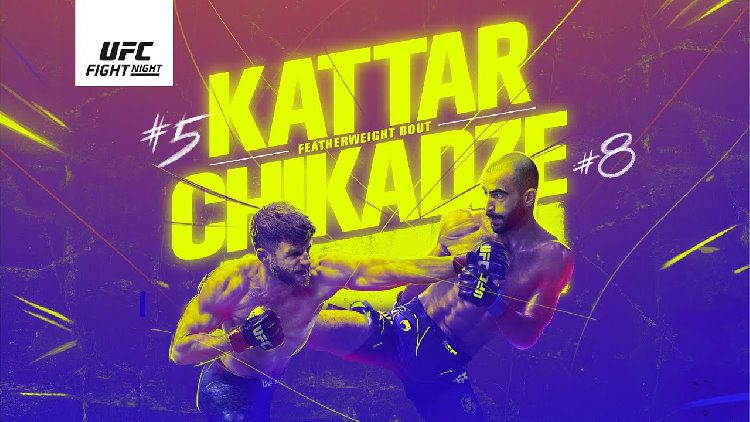 After a 2020 campaign that saw him pick up back-to-back wins over Jeremy Stephens and Dan Ige, Kattar had headed into 2021 high on confidence, but was then schooled in the striking department by former champion Max Holloway that January, and after the damage he endured it’s perhaps just as well that he sat out for the rest of the year.

The matchmakers haven’t been particularly kind to him for his first fight back as he’s going up against a fighter in Chikadze who is proving to be one of the best strikers around, having amassed a 7-0 record since joining the UFC, including TKO’ing Cub Swanson and Edson Barboza in the past year.

Chikadze had a vast amount of high-level kickboxing experience with the likes of Glory before turning his attention to MMA and it shows as he’s a fast and hard-hitting yet calculated striker with finishing power in both his kicks and punches.

Kattar is also very much a striker first-and-foremost and he has good boxing ability and real power in his punches. As good as he can look at times though, the Holloway fight in particular did show that against the striking elite he does struggle to fully step up to that level, though to his credit he is remarkably durable, has good cardio, and with his heavy hands that always leaves him with a chance.

I do think Chikadze will prove to be another fighter that has  the edge over Kattar however, as he’s more slick and explosive, yet is also composed too and will find success with his kicking game here to emerge with a decision victory.

These two flyweight contenders first fought back in 2019 and on that occasion it was Chookagian who emerged victorious by unanimous decision.

since then Chookagian has gone on a 3-2 run that included a title shot against Valentina Shevchenko which she lost by TKO. She also lost by TKO to Jessica Andrade during that period, but wins over the likes of Antonina Shevchenko, Cynthia Calvillo and Viviane Araujo have helped her secure the No.2 spot in the divisional rankings.

As for Maia, she has been less active, compiling a 2-1 run since, with wins over Jessica Eye and Joanne Wood and a loss to the dominant champion Shevchenko.

In the few years since their first encounter it doesn’t feel as if a whole lot has changed in the way these two fight that could affect the outcome. Chookagian remains a tricky fighter to deal with because she’s a high-volume kickboxer from the outside who isn’t necessarily the most effective with her output, but stays very active and constantly gives her opponent something to think about, while making it difficult to close the distance on her.

Meanwhile, Maia has relatively solid muay thai ability, but technically I think she’ll still struggle to close the distance effectively and match Chookagian’s output, while also having difficulty getting the action to the mat where her very good submission skills would give her a better chance of a positive outcome.

As such I think this will end up with Chookagian again outpointing Maia on the feet over the course of three rounds to win by decision.

Bontorin is coming off a decision win over Matt Schnell last time out following back-to-back losses beforehand, while Royval has suffered two defeats in a row in which he was TKO’d by Brandon Moreno and submitted by Alexandre Pantoja.

Despite his recent losses, it’s worth noting that Royval tapped out four opponents in a row before that, so he’s still a very dangerous opponent and holds the No.5 spot on the flyweight rankings, two places above Bontorin.

Royval is the lankier fighter here with a 4″ height advantage over Bontorin, though only 1″ in reach. He employs an aggressive style on the feet, working punches and kicks from range, but will also throw in spinning attacks too. He’s not typically a finisher on the feet however, but it’s a different story on the mat as he has a crafty submission game that accounts for eight of his 12 career victories and he scrambles well too.

The shorter but stockier Bontorin doesn’t have the same tempo to his work as Royval, but he will throw with power as he moves into range. He’s also a strong grappler who can control opponents and he has submitted 11 opponents on the regional circuit, though he’s yet to do so in his five Octagon outings to date.

This is a well matched fight but I’m going to side with Royval here as I think his higher tempo and work-rate on the feet in particular will help win him rounds, while he should have the scrambling ability to avoid being stuck under Bontorin on the mat for lengthy periods to ensure he comes away with a decision victory.

Two heavyweights here who have struggled to find consistency in their respective UFC runs, with Collier having gone 4-5 in the Octagon, while Sherman has gone 3-7 (spread out over two separate spells in the promotion).

They both have similar styles in that they employ a surprisingly volume-heavy style for the weight class. Collier is a former middleweight who has piled on the pounds over the years, and he moves relatively well for his size, but is not the heaviest handed striker around.

Meanwhile, Sherman has more proven finishing ability on the feet, but at the same time isn’t the best defensively and can leave himself open to being hit too often.

This is likely to be a closely contested slug-fest and I’m going to lean slightly towards Sherman here given that we’ve seen Collier stopped by strikes before even at middleweight, and with Sherman being more of a natural heavyweight and carrying that extra pop to his offensive output I’ll take that to secure him a second round stoppage here.

Prediction: Chase Sherman to win by TKO in Rd2.

Algeo has so far gone 1-2 in the UFC, while like his opponent Brito made his mark in the Contender Series and is on a 12-fight unbeaten stretch as he prepares to make his debut in the promotion.

This should be entertaining as these are two game fighters who relish getting into a high-octane scrap. Algeo is a bit more technical on the feet than his opponent and opts for a high-volume approach as opposed to looking for a big finish, and he also has the deeper gas tank here too.

Brito gives up 4″ in height to Algeo, but only 1″ in reach and he’s the stronger, more powerful athlete. He’s a bit of a wildman in the striking department, wading in throwing big power punches, but he’ll also be looking for opportunities to bundle his opponent to the mat and utilize his dangerous submission game too.

Algeo is no slouch on the mat, but his takedown defense is questionable at times and he could be outmuscled in the grappling exchanges here.

Overall I’m leaning towards Brito here, but as fun as he is to watch there is a recklessness to his style that does leave me with lingering concerns. I also think Algeo’s durability will keep him in the fight and could make the final round interesting, but I’ll take Brito to best him in the early rounds and get the decision nod.