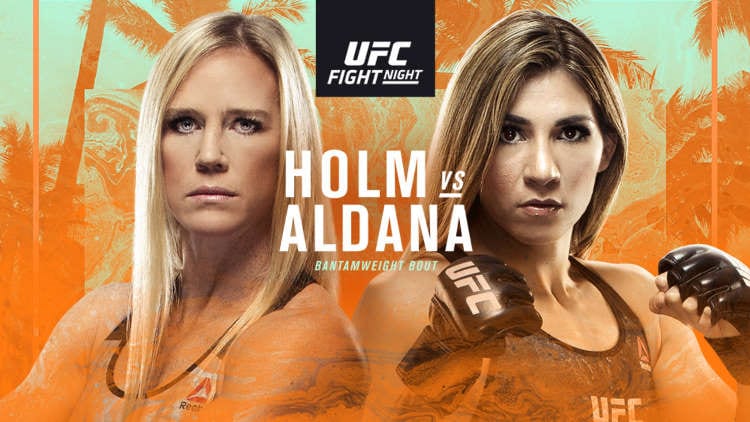 Holm deserves a lot of credit for successfully crossing over from being a boxing champion to also being crowned a titleholder in the UFC and she’s also a great ambassador for both sports, but truth be told, aside from the counter-striking masterclass against Ronda Rousey her performances in the Octagon have often been quite frustrating to watch.

That’s because although Holm is a terrific athlete and technically sound striker who is actually more dangerous with kicks than punches, she often ends up looking like she’s conducting a glorified cardio kickboxing class as she repeatedly strikes thin air with gusto, while her opponent is safely out of range.

You can’t help but marvel at her endless energy reserves, but it often feels like nervous energy being expended rather than anything productive or effective, and that’s reflected in the fact that she has a low numbers in terms of strikes landed and striking accuracy.

That’s not the case with Aldana, who is coming off a big KO win against Ketlen Vieira last time out, has a very high offensive output, will gladly bring the fight to her and also has a solid submission game.

Nevertheless, Aldana has only gone into the championship rounds once in her career, and lost via TKO on that occasion. Given her high output and the fact that Holm just doesn’t tire that could be a concern. ‘The Preacher’s Daughter’ will present a constantly moving target, which will frustrate Aldana, and even if she does have any success with strikes I can see Holm quickly dampening that by opting to clinch up.

It might not be great to watch, but I can see Holm just doing enough, particular in the later rounds, to edge out a decision win here.

Two heavyweight’s who lost last time out get another chance to make an impression with a surprisingly prominent spot on the main card here.

Physically these two are pretty similar in terms of size and stature, but De Castro should have a notable speed advantage in what’s likely to be purely a striking battle.

Both men are proven finishers on the regional circuit, but that doesn’t necessarily mean they’ll continue to do so as the level of competition increases, but there’s a solid chance someone’s getting stopped here and I think the fact that De Castro is quicker on the draw will pay dividends for him with a first round TKO stoppage.

Prediction: Yorgan de Castro to win by TKO in Rd1.

This should be an interesting striker vs. grappler match-up, with De Randamie being an excellent kickboxer, while Pena is a powerful grappler.

A former featherweight champion, De Randamie’s 5-2 UFC record to date is pretty good when you consider both of her losses came against the sport’s most dominant female fighter, Amanda Nunes. Her kickboxing achievements also command respect and I can’t imagine that Pena will have much of an interest in testing her less developed stand-up against her for long here, particularly when she’s also at a 3″ height and 2″reach disadvantage.

That’s not to say that Pena is afraid to get hit, she is actually a tough customer, but is at her best on the mat and should have a considerable advantage in that area if she can get the Dutch striker down.

Pena has actually only fought once in the last three-and-a-half years due to legal issues, becoming a mother and injuries which has stunted her progress and potential, but I do think she does still have something to offer.

GDR won’t be easy to take down and she’ll face some tricky moments on the feet, but I believe Pena’s strength and tenacity will enable her to secure enough takedowns and spells of top control over the course of 15 minutes to secure a win on the scorecards.

Kyler Phillips vs. Cameron Else

Else steps in on short notice to make his UFC debut against Phillips, who won his first fight in the Octagon back in February.

At first glance Else’s recent six-fight winning streak on the regional circuit looks good, but truth be told the standard of opposition was very low – and none-more-so than last time out when he defeated Brad Evans, who had the distinction of only having won three of his 17 career bouts.

That means Phillips is going to be a significant step up for him in addition to having little time to prepare for him, and together with the fact that ‘Matrix’ has sharper striking and I feel will have a notable advantage on the mat, this looks like being his night and I’ll take him to win by submission in the second round.

Prediction: Kyler Phillips to win by submission in Rd2.

Having lost all three of his UFC fights to date, Townsend is perhaps lucky to be getting another fight in the Octagon at all, but though they’ve paired him up with a newcomer in Todorovic this time around, this is not a case of the promotion doing him a favor as Dusko is a notable undefeated prospect who has gone 9-0 so far.

Townsend will have a 2″ height and 5″ reach advantage here, has decent power and is no pushover, but beyond that there’s not too many plus points for him in this particular match-up.

Todorovic comes from a taekwondo background and is the significantly more skillful, dynamic striker here as he demonstrated a couple of years ago with a TKO stoppage against Michel Pereira only a year before ‘Demolidor’ made his way to the UFC.

Todorovic should be able to work for takedowns without too much resistance as well if so chooses and overall I see him making a successful debut here via decision.