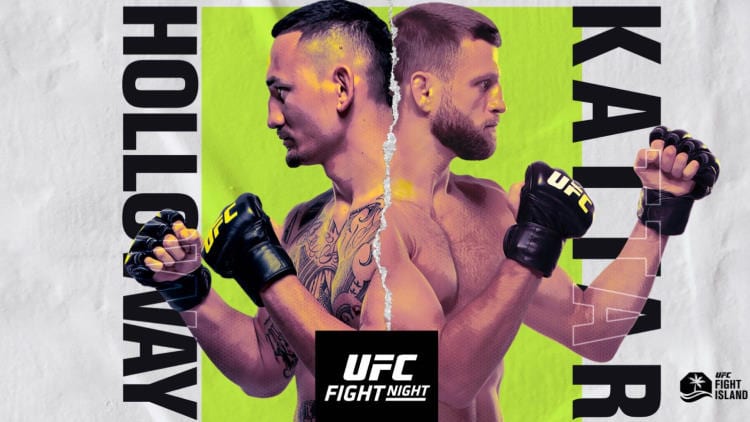 After enjoying the view from the summit of the UFC for a few years, Holloway has had to endure tough campaigns in both 2019 and 2020 in which he lost three of his four fights, so does that mean he’s now past his best?

It’s worth bearing in mind that despite now being almost nine years into his UFC run, ‘Blessed’ is still only 29-years-old and though Alex Volkanovski has proven to be his nemesis having back-to-back fights against him, Holloway gave him a real run for his money in the rematch and some believed he’d done enough to win the split decision verdict.

So, though he’s taken some damage along the way, Holloway is still a major force to be reckoned with thanks to his smooth, technical striking, accuracy, distance management and takedown defense.

Kattar, the No.6 ranked contender at 145lbs is a significant challenge for Holloway though. He has very good boxing ability and throughout his 6-2 UFC campaign to date has demonstrated good finishing ability.

Both fighters are somewhat succeptible to leg kicks, but it’s to their credit that each can lay claim to never having been stopped in their careers due to strikes, and I think they may well keep that record intact here as they fight their way to a decision, with Holloway’s clinical combinations, angles and control of the distance the fight is fought at enabling him to emerge with his hand raised.

Two grizzled veterans of the welterweight division, both Condit and Brown have flirted with retirement in recent years, but after taking time out opted to fight on rather than hang up their gloves just yet.

Both fighter’s recent records are unsightly, but the 40-year-old Brown’s is of particular concern as during a spell that’s seen him lose six of his last nine fights he’s been TKO’d twice and KO’d once, suffering significant concussion symptoms along the way – something that had never occurred in the hard-headed star’s career prior to that.

Condit’s pat few years make for grim reading too, with just three wins from 11 fights, but the only TKO stoppage in his entire career came from a knee injury in 2014, with his real vulnerability having been submission losses, so at 36 he still figures to be the fresher fighter of the two here.

Credit where it’s due though, Brown is still dangerous offensively and if you don’t manage to stop him he’s going to keep pushing forward relentlessly with hard-hitting punches and elbows that can end the fight.

Condit perhaps doesn’t always fight with the same level of confidence and conviction as he did in the past, but he’s still dangerous offensively, and with a recent win under his belt he’ll be ready to battle this one out, and given his durability and concerns over Brown’s weakened chin I think that could work in his favor, leading to a second round TKO stoppage.

Prediction: Carlos Condit to win by TKO in Rd2.

It’s been very unfortunate that injuries over the past couple of years have kept Ponzinibbio from attempting to improve upon his seven-fight winning streak, but he finally gets back into the Octagon on Saturday night against Jingliang, who is coming off a loss, but had won three fights in a row prior to that.

Obviously ring rust is going to be a concern for Ponzinibbio after that layoff and Jingliang will be looking to unsettle him with his pressure-heavy, high-volume striking style, while he can also grapple too.

It’s hard to say whether Ponzinibbio’s previous ailments will affect him, but I’m expecting him to be in good shape here and he too has a high-volume approach, but is more technically skilled than Jingliang and carries a lot of power in his punches without having to be as reckless as his opponent to get the desired result.

Jingliang is a tough customer though who has never been stopped by strikes, so I can see this being a fight where Ponzinibbio relies on being the slicker striker to secure a win on the scorecards.

Buckley made a big impression last year when a stunning spinning back kick KO against Impa Kasanganay became the most viral highlight finish in UFC history, and he proved that was no fluke when he won his next fight by KO too.

It seems the UFC is still not looking to push the 26-year-old too far too soon though as he’s now being lined up against Di Chirico, who is by way of contrast coming off a three-fight losing streak.

That being said, Di Chirico shouldn’t be considered a pushover and has never been stopped by strikes, so despite Dana White having named him as one to watch in 2021, it’s important Buckley doesn’t get caught up in his own hype.

Nevertheless, in addition to his punching power Buckley’s also the faster man here too and I do think he can get a stoppage win here, though it might be asking a bit too much to expect it to happen in the first round given his opponent’s durability.

Prediction: Joaquin Buckley to win by TKO in Rd2.

Two undefeated fighters clash in the main card opener, with Todorovic having amassed a 10-0 record, including a TKO victory in his UFC debut, while Soriano has gone 7-0 to date and securing a KO win in his first Octagon appearance.

The 26-year-old Todorovic is not only already a solidly well-rounded fighter, but also fights intelligently, using all aspects of his skill-set and keeping a cool head with his methodical offensive approach.

Soariano can also cope well whether the fight is on the feet or the mat, but he is less composed of a striker and that can take a toll on his gas tank and defense.

I’d expect to see both fighters mixing it up here, but I feel Todorovic edges the fight in the striking department and has the better skill-set and mentality overall, which will help him emerge with a decision victory.