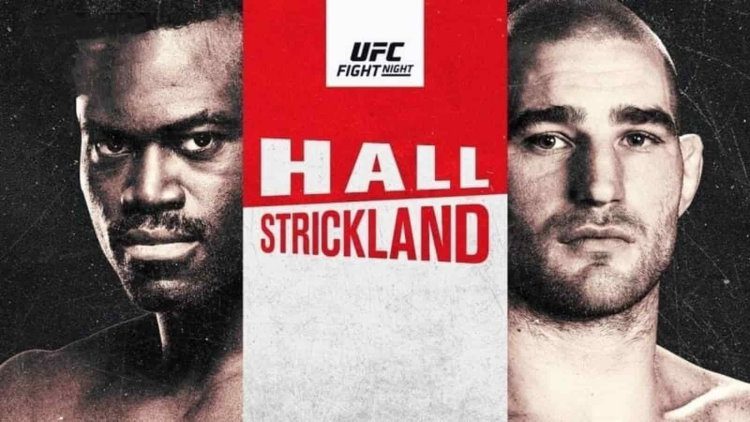 Both Hall and Strickland are in fine form heading into this main-eventer, with both having compiled four-fight winning streaks inside the Octagon.

In hindsight, Hall’s run has been weakened a bit by the fact that three of his opponents, Bevon lewis, Antonio Carlos Jr and Anderson Silva all crashed and burned out of the UFC soon after fighting him, while his last win was something a freak occurrence due to Chris Weidman breaking his leg in the early stages of the opening round.

Nonetheless, while he’s rarely shown this kind of consistency in picking up victories during his UFC run, when he has been performing well, Hall has shown off very dynamic, powerful technical striking that’s racked him up no less than 13 wins by TKO or KO from 17 career victories. It’s a credit to him that approaching 37-years-old he’s still in excellent physical condition and shows no sign of slowing down, but mentally there are always question-marks leading into his fights as to whether he’s going to display that killer-instinct or not.

On the other hand, Strickland has always been a consistent campaigner and that’s shown in the fact that he’s won 23 of his 26 career-fights to date, including a 10-3 run in the UFC to date.

Mentality wise, Strickland is essentially the complete opposite of Hall as he’s a tough competitor who seems to relish the opportunity to punch his opponent in the face, and it’s worked out well for him on the whole, having a 10-3 run in the UFC so far, and a 23-3 record overall.

Strickland isn’t nearly as dynamic or hard-hitting as Hall (few fighters are), but he is a solid volume-based technical boxer who pushes a very hard pace from start to finish. However, for this particular match-up it’s worth noting that he’s also fairly well-rounded with respectable wrestling and grappling potentially giving him another avenue to victory, though Hall’s takedown defence is generally very good.

So, Strickland is the grittier, more reliable fighter here, but I question how well he’ll fare against the faster, more unpredictable offense and strong ability to counter effectively that Hall will offer up. It’s perhaps telling that the only time Strickland has been finished was against another flashy striker in Elizeu Zaleski dos Santos via a spinning wheel kick KO, and that’s the kind of weaponry he’ll be facing on Saturday night, so I’ll cautiously take Hall to win by TKO in Rd3.

Prediction: Uriah Hall to win by TKO in Rd3.

Two talented submission specialists on display here, with Kang having won 11 of his 18 career victories via submission, while Yahya takes that even further by having 21 submission stoppages from 27 victories.

Yahya is very much a specialist as he’s never had a whole lot to offer on the feet, and in fact has never won a fight via strikes despite now heading into his 40th career bout, which is a negative, but at the same time it’s also a big compliment to his high-level skills on the mat that at 36-years-old he still remains very competitive and wins far more bouts than he loses.

It makes this is a very interesting fight though as Kang may not be quite on Yahya’s level in terms of his BJJ, but he’s still highly capable, while on the feet he has more to offer, is the more athletic fighter of the two and is working with a very significant 3″ height and 6″ reach advantage.

I’m not convinced Kang will be able to stop Yahya, but I think if he tries to keep this fight on the feet then he can outstrike and outwork him to emerge with a decision win.

This match-up came about on very short notice after Stolze’s original opponent Mounir Lazzez had to withdraw from their fight due to VISA issues, and so now we’re left with a match-up in which both men are looking to pick up their first win inside the Octagon.

Gooden is under more pressure here as not only is he coming in with barely any time to prepare, but he’s lost two in a row, albeit against respectable opposition in Alan Jouban and Abubakar Nurmagomedov.

Gooden is powerfully built striker who focuses primarily on his boxing with solid power, but will throw in the occasional flashier technique and can also wrestle too.

Stolze is an all-rounder with a respectable kickboxing game from range, with some nice kicks in particular that could prove to be effective against Gooden, while he also has better movement and can hold his own on the mat too.

This may prove to be a close fight, but I think Stolze just has the edge in most areas, and together with the fact that Gooden is coming in on short notice I think that it’s Stolze who will get his hand raised after 15 minutes of fighting here.

Buys vs. De Paula is another main card fight in which both competitors are battling to secure their first win in the UFC, after both came up short by unanimous decision in their debuts.

Truth be told neither fighter looked good in their first Octagon outing and at 26-years-old they are still developing prospects who don’t have vast amounts of experience, with Buys holding a 5-2 record, while de Paul is 5-3.

This is likely to be a grappler vs. striker situation, with Buys looking to utilize her wrestling to grind out a decision win, while de Paula is a muay thai fighter who’ll be looking to land strikes from range or from in the clinch.

In the end I favor Buys to have some success in bringing this fight to the mat, where her top pressure will stifle de Paula and lead to a win on the scorecards.

This fight was originally scheduled to take place in May, but had to be postponed due to health concerns after a botched weight-cut led to Benoit coming in 3lbs overweight. Benoit comes into the fight on a two-fight losing streak, while in what appears to be a running theme on this card, Adashev is seeking his first UFC win.

Truth be told, both of these fighters have salty record in general, not just the recent past, with Benoit going 10-7 over the course of his career, while Adashev is only 3-3.

However, there’s still a lot to like about Benoit’s game as he’s a heavy-hitting fight-finisher by flyweight standards, has never been finished by strikes and also has solid wrestling, which could be crucial here as Adashev is very much rooted in his kickboxing background and will be eager to keep this fight standing.

Troublingly, Adashev’s not really shown off his striking in the best light since joining the UFC, and indeed was even KO’d just 32 seconds into his promotional debut, so it’s hard to have much confidence in him leading into this one, and I think Benoit shows off his broader skill-set here with striking and grappling to secure the decision win.

Both of these fighters have experienced mixed results in recent times, with Barberena coming off a win, but having lost two in a row prior to that, while Witt only has one win from his three-fight run in the promotion so far.

Barberena is a hard-working battler who is happy to slug it out on the feet and try to outlast his opponent with his toughness and cardio, though he can also utilize his wrestling and bludgeoning ground and pound game and will have 2″ in height and reach over his opponent.

Meanwhile, Witt has solid wrestling and submission skills to go along with it, which he’d be well advised to pursue, as on the feet he’s had durability issues that reached a new low last time out when he was KO’d in just 16 seconds by Matthew Semelsberger. That wasn’t just a one-off though as he was also TKO’d 48 seconds into his UFC debut, and in total has been finished by strikes five times in his career so far.

When you also consider that Witt’s cardio isn’t the greatest, this doesn’t seem like a good match-up for him and I’d expect Barberena to outgun him on the feet and be able to hold his own if there’s grappling exchanges, leading him to a second round TKO finish.

Prediction: Bryan Barberena to win by TKO in Rd2.