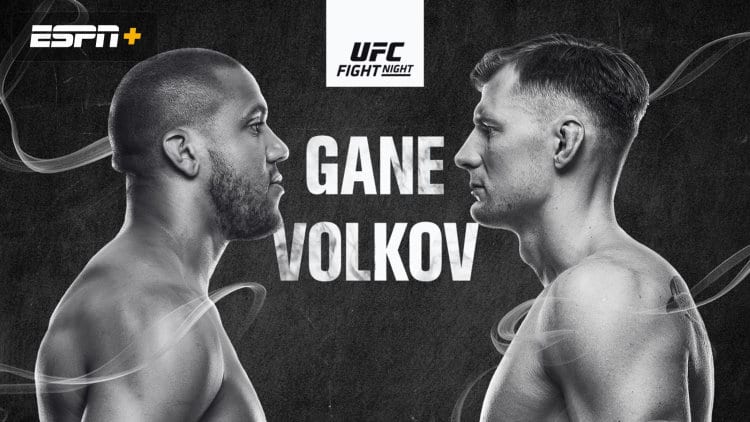 This is an intriguing headliner as these are two genuinely skilled heavyweight who have the ability to make it all the way to a title shot.

On the feet Volkov has established himself as having some of the most technical striking in the weight class, operating very effectively from range with his straight punches and kicks, helped along by standing 6ft 7″ with an 80″ reach. He’s not typically the heaviest one-punch hitter, but the volume and accuracy of his work can quickly start to take a toll, and he has the conditioning to keep that going until his opponent wilts.

However, Gane is also a talented muay thai striker and has experience in that sport to draw on to help counter the fact that he’s still building up his MMA resume – with very good results so far.

Like Volkov, Gane will stay active on the feet and has good, although not necessarily devastating power to go with it, while being mindful of his defensive duties, and despite being 3″ smaller here, he’s actually got a 2″ reach advantage to work with.

An important factor for Gane is that he also has more strings to his bow as he’s proving to be a solid wrestler and submission threat on the mat too, though Volkov’s takedown defense is fairly solid.

I’ve been going back and forth about this prediction, particularly because there’s still some unknowns about Gane at this stage in his career, such as how he’ll react to a high-volume striker like Volkov, and how he’ll respond if his takedown attempts are fended off.

I like the fact that Volkov has recently gained some more size, almost coming in at the heavyweight limit for the division last time out, and that seems to be adding a bit more authority to his strikes and make him more difficult to manhandle, so I’m cautiously leaning towards the Russian to keep this one standing and outland and outpace Gane on the feet to earn a win on the scorecards.

OSP’s odd career continues as he moves back up to heavyweight to fight Boser on short notice after his initial bout against Max Grishin at 205lbs fell through.

I say ‘odd’ not just because he’s opting to randomly bob up and down between the weight classes at this late stage in his UFC run, but mostly because of the fact that he continues to be a perplexing fighter who hasn’t lived up to his full potential, looks very uninspiring at times, yet remains capable of flashes of greatness.

For instance, if you look at his last ten fights, he’s only won half of them, but all the victories were by stoppage and included two KO’s, two Von Flue chokes and a straight armbar.

Meanwhile, Boser already fought to a split decision loss against Ilir Latifi earlier this month, so it’s somewhat surprising to see him back in the Octagon so soon as looks to avoid slumping to his third defeat in a row.

Boser isn’t the biggest heavyweight, having also fought at 205lbs in the past, and is giving up 5″ in reach to OSP here, but he does have quick hands and significant power at his disposal, in addition to being almost a decade younger than Saint Preux.

So, this is a tricky one as I don’t like how unreliable OSP can be in the Octagon, and a I don’t really like that Boser is fighting again so soon. Still, while OSP always has that potential to create a big finish out of nowhere, Boser’s durable, is the more active fighter offensively and I think he puts in a harder shift on the feet compared to Saint Preux to earn a decision win.

Fili is coming off a decision loss against Bryce Mitchell last time out, while Pineda was KO’d by Cub Swanson, so they both have something to prove in this main card match-up.

Pineda is on his second stint in the UFC and is a well travelled veteran whose also competed for Bellator and PFL, and at 35-years-old has no less than 43 fights to his name. A remarkable stat though is that even with all that fight experience, Pineda has never won a fight by decision, with all 28 of his career victories coming inside the distance, including 18 by submission.

It’s a statistic that doesn’t necessarily bode too well for him against Fili though, given that ‘Touchy’ hasn’t been finished for five years and has gone the distance in nine of his last 10 fights.

Pineda will certainly do everything he can to change that though as he’ll come out aggressively, but he does face a 4″ height and reach disadvantage on the feet and will have the more technical striking of his opponent to deal with too.

Pineda will be equally offensive in terms of his grappling game and it’s certainly an area that will challenge Fili, although he’s notably improved in that regard over the years and Pineda also struggles to keep his early pace going later in the fight.

Overall I like Fili’s chances of surviving the early storm and then turning the screw with his slicker striking and better cardio to ensure that Pineda’s decision win drought continues.

Two impressive career records on display in this featherweight clash, with Valiev having compiled a 17-2 (+1nc) run to date, while Barcelos has gone 16-1.

On closer inspection, Barcelos has the more impressive resume though as he’s racked up five wins in a row since joining the UFC, albeit without having faced the stiffest level of opposition, while Valiev was actually TKO’d in his UFC debut by Trevin Jones, but the result was later amended to a no-contest due to Jones testing positive for marijuana.

Nevertheless, Valiev is a well-rounded and well conditioned fighter and will apply a lot of pressure, though without being the most potent in terms of his finishing threat.

Barcelos also has the all-round ability to be a big problem in his fights no matter where the action goes, and as well as having the power advantage I just feel he’s just a slight notch above his opponent here in most areas, so I’ll take him to get the decision nod, but it should be a closely contested battle from start to finish.

These two are literal giants of the light-heavyweight division, with Marques standing 6ft 6″ tall, yet actually giving up a sizeable 6″ in reach to the 6ft 5″ Nzechukwu.

Known as ‘The African Savage’, Nzechukwu is an athletic striker with proven power, as highlighted last time out with a KO finish against Carlos Ulberg.

However, Nzechukwu’s ground game is not the best and that’s good news for Marques as he’s a good wrestler who can catch his opponents off-guard with his takedown methods and also has a number of submissions to his name, including in his last Octagon outing.

Nzechukwu is the younger man here and also appears to still be developing his skills, so I’m sure he’s working hard on his defensive wrestling, and together with his reach advantage I’m going to say he can keep upright for the most part here and get the big connections he needs on the feet to facilitate a second round TKO stoppage.

Prediction: Kennedy Nzechukwu to win by TKO in Rd2.

For a talented fighter who lost only once in his first 15 career fights, it’s remarkable that Moicano has since lost three of his next four fights.

Even more troubling though is the fact that all three defeats came via strikes in the first half of the fight, with the latest one being a KO loss in the opening round against Rafael Fiziev in December of last year.

So, Moicano needs to get a win under his belt and he’s going to be going up a fighter in Herbert who has yet to get a win in the Octagon under his belt, having been handed a tough debut against Francisco Trinaldo last year that led to him being TKO’d in the third round.

That being said, prior to the UFC, Herbert, known as ‘The Black Country Banger’ was plying his trade in the Cage Warriors promotion and had a reputation for finishes fights with his heavy-handed striking.

With that in mind he’ll fancy his chances of finding Moicano’s fragile chin, but while the Brazilian doesn’t have much in the way of power, he’s still technically capable on the feet and more importantly with regards to this fight, is also very skilled on the mat and is a big threat by way of submission.

Given his durability issues I would expect Moicano will be more determined than ever to play to his grappling strengths here and I think that will pay off for him, leading to a second round submission stoppage.

Prediction: Renato Moicano to win by submission in Rd2.