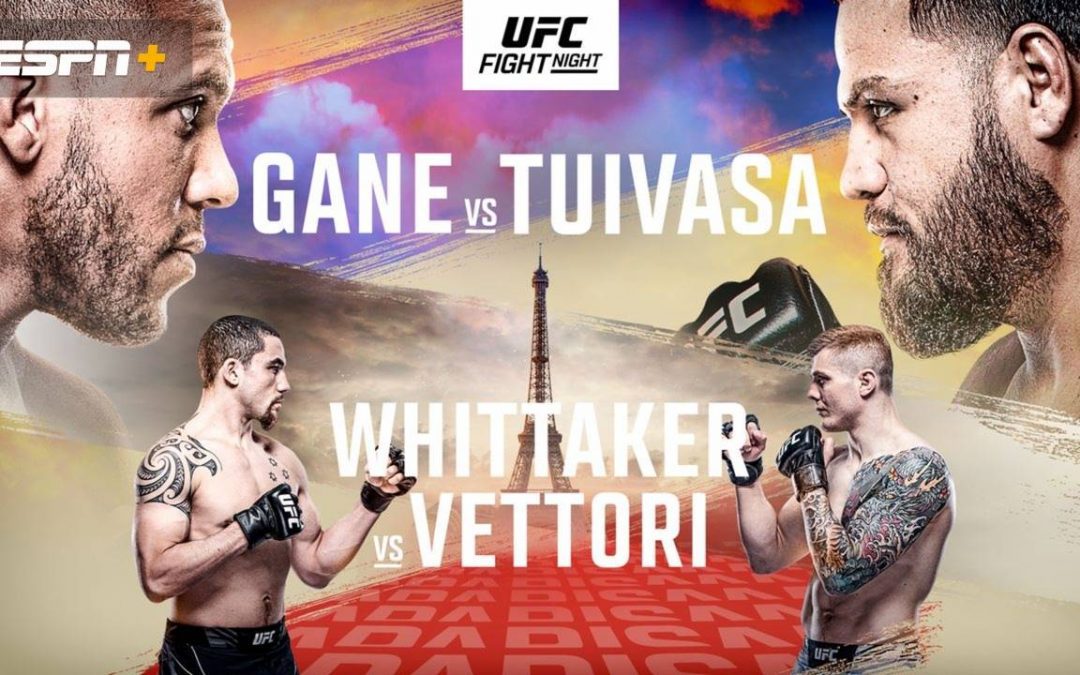 After amassing a perfect 10-0 record to earn a heavyweight title shot, Gane was finally handed his first loss last time out by way of unanimous decision against Francis Ngannou and now looks to get back on track against the in-form Tuivasa, who is riding a five fight winning streak.

It’s been impressive to see Tuivasa’s rise to No.3 in the heavyweight rankings, especially when you consider that he was actually on the verge of being released from the promotion back in 2019 after a three-fight losing slump. Since then though he’s made the best of his heavy-handed brawling to stop all five of his opponents via strikes, including the likes of Stefan Struve, Greg Hardy, Augusto Sakai and most recently Derrick Lewis.

Gane is certainly the more refined technical striker here, fighting in a more cerebral, calculated manner than your typical heavyweight, with clean boxing ability and very good range management, aided by the fact that he’ll have a 2″ height and whopping 8″ reach advantage here and has solid cardio and speed for his size.

Gane can also switch things up with clinch work and will land takedowns too, though it was rather suprising to see him outwrestled by Ngannou in their title fight, something that no-one had seen coming beforehand.

That’s not something he’ll have to concern himself this time out though as Tuivasa will be all about landing a big power shot that puts his lights out. I think he’ll have a hard time doing so though due to Gane being able to effectively control the action from range, gradually picking him apart over the full five rounds rather than going for a big finish to secure a convincing decision win.

Whittaker and Vettori share an unfortunate stat of having both now lost twice to current middleweight champion Israel Adesanya, but that aside it’s clear these are two of the division’s most talented and consistent performers, with former champ Whittaker’s overall 185lb record being 11-2, while Vettori is 8-3-1.

Vettori has certainly improved his striking during his time in the UFC and together with very good durability and cardio that gives him the confidence to constantly push forward and pressure his opponents.

However, Whittaker is still the more refined and dangerous striker of the two, working a robust boxing game including a cultured jab, sharp timing and very good footwork, while he will also mix in kicks too.

So I think Vettori will hope to utilize other aspects of his game to make up the difference here. He has very good wrestling ability, but on this occasion he may struggle to take full advantage of that as Whittaker has excellent takedown defense and is a good wrestler in his own right. As such Vettori may have to resort to trying to get the upperhand from the clinch, though that too may be easier said than done.

In the end I feel that Whittaker can force this into largely being a striking battle in which he’ll be able to match Vettori’s pace and will land the cleaner, more effective strikes to emerge with a decision win.

Di Chirico is coming off a 17 second head kick loss and has only one win to show from his last five UFC outings, while Kopylov is also struggling after losing his first two fights since joining the promotion.

It’s a bit of a puzzle how this has landed so high up the main card, though Kopylov did look promising before joining the UFC with an 8-0 record including seven stoppages while mostly competing for Fight Night Global.

Kopylov has good boxing ability with respectable power and lands well on the counter, but he’s been reluctant to let his hands go as often as he should during his UFC run and that’s not worked out well for him.

Di Chirico is a more versatile all-rounder who can strike and wrestle. He has a good mix of offensive weapons on the feet, but isn’t the busiest with his output, and at times opting to go into the clinch instead of pressing the striking action, while he can also leave himself open to being hit at times too.

Of the two I feel Kopylov hasn’t fully shown what he’s capable of in the UFC so far, and with his job potentially on the line and Di Chirico likely to be more tentative after that quick head kick loss last time out I think this could be Koplyov’s chance to step up his own offense and emerge with a second round TKO victory.

Prediction: Roman Kopylov to win by TKO in Rd2.

Makdessi has only been fighting once a year since 2017, but has compiled a solid 4-1 run along the way, while Haqparast actually joined the UFC that same year and has been more active, going 5-4, including back-to-back decision losses in his last two appearances.

Coming from a karate background, Makdessi had a penchant for all manner of flashy kicks and spinning attacks earlier in his career. He’s now 37-years-old though and has had numerous injuries over the years, and these days he has a more toned down style with less eye-catching moves and more focus on solid boxing fundamentals. He’s never been much of a finisher during his 12-year run in the UFC though and instead looks to outpoint opponents to win on the scorecards.

Haqparast is 10 years Makdessi’s junior and has an aggressive style with good boxing ability and fast hands, but though he demonstrated a knack for finishing opponents via strikes on the regional circuit in Germany prior to joining the UFC, he hasn’t been able to replicate that in the UFC for the most part.

Nevertheless, I do feel that the younger, fresher Haqparast is the heavier hitter of the two here and will be the more aggressive striker over the course of three rounds to edge out a decision win over the experienced veteran.

Two newcomers get a spot on the main card here in a short-notice fight that sees France’s own Gomis looking to build upon an eight-fight winning streak on the regional circuit as he goes up against Dutch fighter Errens, who holds a 13-3-1 record.

Gomis is a very capable striker with good speed who likes to operate from range with good kicks and backs that up with his punches and will look for knees at closer range. He’s also not afraid to go for a takedown, though he’s not particularly strong on the mat.

Errens doesn’t appear to be just cannon-fodder for the hometown fighter as he has solid kickboxing and a background in judo too, in addition to having a few submission wins under his belt too.

I think this could end up being quite a competitive fight, but Gomis will employ the more effective striking from range to secure a decision win.

These two are back in the Octagon relatively quickly after competing in July, with Jourdain coming off an entertaining majority decision loss to Shane Burgos last time out, while wood picked unanimous decision win over Charles Rosa.

This should be a fun, competitive fight between two fighters who match up with each other.  Jourdain is a striker who builds up a head of steam as the fight goes on, going for a good amount of kicks along the way, but backing that up with good boxing and he throws with solid power in his punches as he looks to improve upon a strong finishing record.

Wood is still establishing himself at featherweight after a move up from bantamweight and will have a bit more of a methodical, consistent approach over three rounds with his solid kickboxing from range.  Wood does have a few submission wins too, but then so does Jourdain.

This has all the making of a close fight and I think it’ll go to the scorecards, where Jourdain will eek out a decision win thanks to having landed the more telling blows and more eye-catching and aggressive flurries.