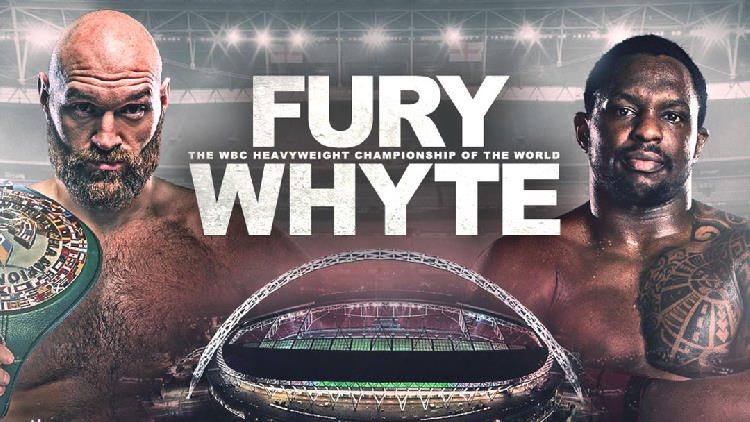 The heavyweight belts are on the line as Tyson Fury meets Dillian Whyte at Wembley Stadium on Sunday morning.

There has been plenty of talk before the fight about Whyte potentially pulling out, but we expect the scheduled fight to go ahead.

Fury, the current champion, is the odds-on favourite to retain his belts.

Tyson Fury is the most dominant heavyweight in the business after knocking out Deontay Wilder in consecutive fights.

Facing Dillian Whyte is a step down in class, but that doesn’t mean Fury can relax and take his opponent cheaply.

Whyte is 28-2 with 19 wins via knockout, including a TKO victory over Alexander Povetkin to win the WBC Interim heavyweight title.

He now gets his chance to win the world title in front of a raucous Wembley Stadium crowd, but he’ll need to produce the best fight of his life.

Whyte believes he’s ready for what Fury has to offer.

“He can be unpredictable so we’re just trying to be as ready as we can be, trying to create all different kinds of circumstances, different situations so whatever he brings, we’ll be ready,” Whyte told SkySports.

“I’m trying to get the job done. When I get the job done then I’ll start acting crazy but now, I need to be focused on the job. Not ‘wow, I’m here!’ Just focus on the job, win the fight then afterwards you can do whatever you want.”

Scoring decision wins over the likes of Joseph Parker and Oscar Rivas isn’t going to cut it against Fury, who is aggressive and has some of the biggest hands in the game.

Fury’s power often goes underrated, but it should be on full display against Whyte, who will do well to survive the full 12 rounds.

Bookmakers have Fury at $1.17 and Whyte at $4.65. We don’t see much value in betting Fury at such a short price, but there is value with the method of victory option.

Fury is paying $1.72 to win via KO or TKO, which is a fair price. He shouldn’t need to wait for the final bell to be awarded the victory and Whyte will do well to stick with him.

We see no way Fury can be beaten. He took huge punches from Wilder and still won, and Whyte doesn’t have nearly the same power.

We expect Tyson Fury to be eyeing a knockout in the middle rounds after feeling Whyte out to start.

He is capable of landing the knockout blow early, but Whyte is good enough to hang around until the middle rounds.

Take Fury to win in Round 8 at $12. It’s always a tough betting option to correct predict, but punters get odds worth snapping up. You could take saver bets on Round 7 and Round 9, to cover your bases.

There is also an option to take Round 7-9 in when the fight will finish markets. It’s paying $4, so punters get odds worth the risk.

Bookmakers are also offering $1.45 for Whyte to be knocked down. We expect the challenger to hit the canvas at some stage and we’d be surprised if he stayed upright.