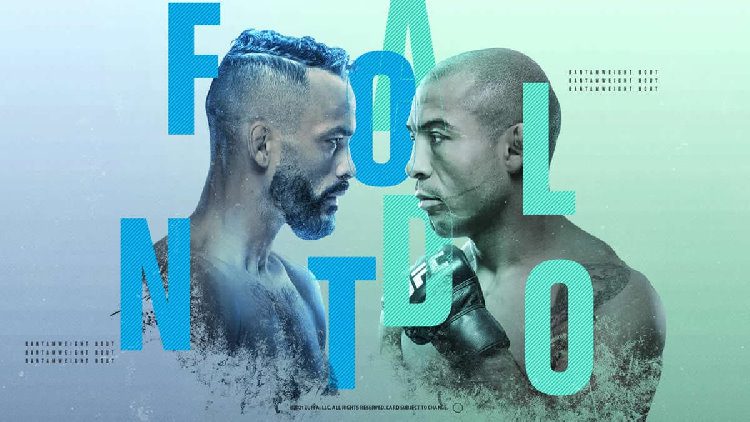 After patchy form earlier on in his UFC run, Font has put together an impressive four-fight winning streak over the past few years that’s seen him get the better of notable names like Sergio Pettis, Ricky Simon, Marlon Moraes and most recently Cody Garbrandt, leading him to the No.4 spot on the bantamweight rankings.

Of course former featherweight king Aldo needs no introduction, but since dropping down to 135lbs he picked up a couple of losses against Marlon Moraes and Petr Yan, but the 35-year-old has since looked rejuvenated with back-to-back decision wins against Marlon Vera and Pedro Munhoz.

Font is an active striker who likes to fight long with solid fundamentals, particularly in the boxing department and he does have a slight height and reach advantage here to work with. He’s also yet to be stopped by strikes in his career to date and while he’ll prefer to stay upright, he can compete wherever the fight goes.

Aldo has shown more of a willingness to show off other aspects of his MMA game of late, but like Font he’ll most likely be looking to strike here. Long-time fans of Aldo will be pleased to see that his powerful low-kicks are starting to re-appear as that’s traditionally one of his best weapons, but his boxing has always been a major asset too and has looked sharp during his recent victories.

Technically I have to give Aldo the edge here and his defense can be as good as his offensive too, which will benefit him as looks to navigate his way into range. I think this will prove to be a highly competitive bout, but I’ll take Aldo to show his class and edge the action over five rounds.

Riddell is 4-0 in the UFC to date and holds a 10-1 record overall, while Fiziev was TKO’d in his UFC debut, but has since also racked up four wins in a row to also go 10-1 in his career so far.

This should be a great fight between two high-level strikers who had extensive backgrounds competing in kickboxing and muay thai respectively before focusing their attentions on their MMA careers.

Riddell utilizes his boxing ability well in the cage and has good movement and pressure to go along with it, while he’s also yet to be finished by strikes and has good cardio too.

Fiziev is the stronger starter of the two, but that early exertion can cost him later in the fight. His technique is impressive though, effortlessly throwing fast, powerful kicks and piecing together quick, potent combinations.

If anyone’s going to change things up and go to the mat I’d expect it to be Riddell, but I think both will be eager to test their skills on the feet here and Fiziev’s takedown defense will encourage that. Riddell may have more staying power, but I feel Fiziev’s fast and clinical combinations could help him edge out the earlier rounds, leading him to a decision win overall.

Just a few days shy of his 40th birthday, Guida will look to bounce back from a split decision loss last time out when he fights another veteran in the 41-year-old Santos, who was KO’d in his last outing, but had won eight UFC fights in a row prior to that.

After a tough loss like that Santos will perhaps be glad that he’s going up against a fighter in Guida who is not known as a power-puncher.  That being said, Guida is a work-horse who will apply pressure to the Brazilian early and not let up until the final bell thanks to his excellent cardio, whether that’s being a scrappy brawler on the feet, or at his most effective being a mauler on the mat.

Santos will have a distinct size advantage in the striking exchanges though as he has 5″  in both height and reach over ‘The Carpenter’.  Meanwhile, Santos strongest suit is his grappling and he poses a serious threat via submission.

Guida’s submission defense has been an issue in the past and so I think this could prove to be a tricky match-up for him and Santos will emerge with a second round submission finish.

Prediction: Clay Guida to win by submission in Rd2.

Crute suffered a first round TKO stoppage in his last Octagon outing due to leg kicks after posting back-to-back wins prior to that, while Hill suffered a gruesome elbow dislocation on his way to being TKO’d by Paul Craig, which marked the first loss of his career.

The good news for Crute is that Hill is not as heavy a leg kicker as Anthony Smith is, but having said that ‘Sweet Dreams’ has very good hands, real power and adopts a high-volume approach from range, which will only be enhanced by his 2″ height and 5″ reach advantage here.

Crute is also a solid striker who keeps a good pace thoughout, but also has very solid wrestling chops and has shown of his submission skills too at times. That makes him the more well-rounded of the two here, but Hill does do a good job of working back to his feet when he’s taken down.

That all makes this an intriguingly balanced fight, but while I think Hill may have the striking advantage, I feel Crute can at least put up a deceet fight in that regard, while utilizing takedowns and mat work to help swing the fight in his favor at the end of 15 minutes.

Allen has won five of his six UFC fights so far, while Curtis made an immediate impact in his UFC debut last month with a first round KO over Phil Hawes and is now drafted in as a late replacement here.

Allen is certainly the better all-rounder here, being a strong grappler who can control the action on the mat and has a good submission arsenal at his disposal, while he has also been diligently working on developing his striking too.

Curtis on the other hand is striking orientated and has serious power in his hands, but he’s going to have to be very wary about the takedown threat from Allen, which is likely to make him more cautious offensively than he’d like.

It’s the kind of match-up where Allen will be thankful for his improving stand-up game to enable him to pick his moments to bring the fight to the mat rather than having to commit to it straight away.

That being said, he’d be wise to not wait too long to utilize his grappling as that’s where he holds a major advantage, resulting in a second round submission finish.

Prediction: Brendan Allen to win by submission in Rd2.