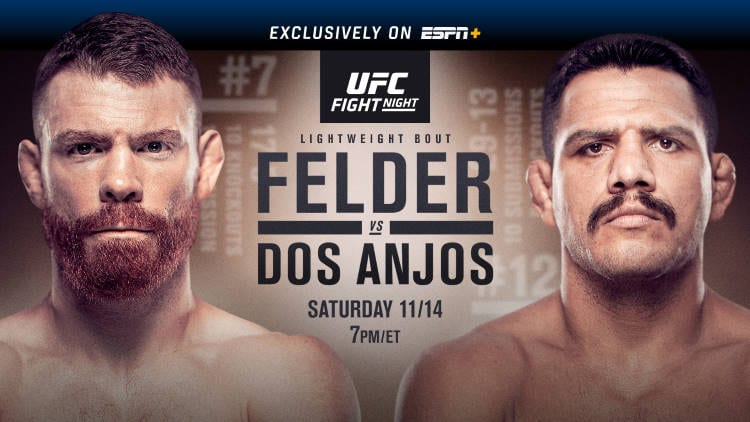 Felder has hit the gamble button by stepping into this fight against former lightweight champ dos Anjos on just five days notice.

It’s a curious choice as not only is he fighting a tough opponent, but Felder will have to make a sizeable weight cut quickly to get down to lightweight, and has also agreed to keeping this one as a five-rounder.

Felder appears to be putting faith in the fact that he’s recently been training for a triathlon, which no doubt will help his cardio somewhat, but still, that’s different from being in fight shape and RDA is known to push a very high, pressure-heavy pace, and likely even more-so in his return to lightweight after a lengthy stint at welterweight.

Felder will certainly give RDA plenty to think about on the feet though with his technical muay thai striking, gritty clinch work and durability.

However, dos Anjos appears to be in great shape a he returns to the division he’s best suited to and will be offering up a high-octane volume of strikes, while his well-rounded skills means he can also operate effectively from the clinch and go for takedowns too.

I think mixing things up with striking, clinch and grappling work will be important for dos Anjos to wear on Felder and that’ll pay dividends later in the fight as his opponent starts to feel the effects of his lack of fight camp, though the Brazilian will probably still have to go to the scorecards in order to get his hand raised.

While not necessarily the most high-profile co-main event there’s no doubt that this could be a lot of fun thanks to both fighters fearsome striking, with all four of Alhassan’s wins in the UFC so far having come via punches in the first round, while though Williams secured a KO victory just 27 seconds into his debut earlier in the year.

It remains to be seen if Williams can continue that kind of form though as even on the regional scene his record has a fair number of decision victories and this is a definite step up. That might not be such a bad thing though as Alhassan will be going all out for a finish early and could leave himself vulnerable later on in the fight as he runs out of steam. Williams has a 2″ height and 4″ reach advantage too if if he’s aiming to survive that early onslaught on the outside.

However, I think Alhassan’s all-guns-blazing approach could lead to Williams looking to meet fire-with-fire and I think that could be a mistake against such an instinctive, heavy-handed and fast opponent, and so I think Alhassan emerges with a first round TKO victory.

Prediction: Abdul Razak Alhassan to win by TKO in Rd1.

With only one win in four UFC fights, Safarov really has to get a win on Saturday night against Marquez, who has gone 1-1 in his Octagon run so far.

A big concern for Marquez heading into this one is that due to injuries he’s been out of action for well over two years. Nevertheless, Safarov’s lack of athleticism and speed together with his suspect cardio late in the fight should help Marquez ease his way back into life in the Octagon.

Safarov’s offensive wrestling is ok, but his grappling defense is a weak point and in general it’s difficult to spot many areas in which he can get the better of Marquez.

So I’m taking Marquez to win here in the second round, and all options are open as to how he gets it done, either by strikes on the feet or ground.

Prediction: Julian Marquez to win by TKO in Rd2.

As a former college football who was at one point under contract with the Cleveland Browns, Anders certainly had a lot of athletic potential when he first joined the UFC, but three years into his UFC run he’s experienced very mixed results, going 5-5 so far.

Anders has a basic foundation of skills, being heavy-handed and explosive on the feet while possessing a functional ground game, which overall helps keep him competitive at a certain level, but his tempo can be disappointingly slow at times and the cracks can begin to show when he steps up to a better class of opposition.

I don’t think Arroyo, a former Contender Series recruit who hasn’t been seen since losing his UFC debut by decision a year ago, fits into that category though.

Arroyo is a proven finisher on the regional scene, both by strikes and submissions, but again that doesn’t always hold up once you get to the UFC and given the people Anders has already faced in the UFC and the fact he’s been stopped only once in 18 fights, I feel this is the kind of match-up where he can successfully operate behind his basic fundamentals while leaning on his athleticism to emerge with a decision victory.

Allen was supposed to fight Ian Heinisch last week, but after his opponent dropped out due to Covid, he now finds himself up against another solid opponent in Strickland just 7 days later, with the fight being scheduled as a 195lb catchweight.

For his part, Strickland is only a couple of weeks removed from a decision win over Jack Marshman after a two year layoff, so he’s clearly eager to keep the momentum going and make up for lost time, though it remains to be seen if the quick turnaround will take a toll on him.

The 24-year-old Allen is already a good fighter and improving all the time, so he’s certainly a step up from Marshman and will keep things competitive on the feet, while he’s also being a very good grappler who will deliver a real threat via submission.

However, Allen’s takedowns aren’t the best and Strickland’s own wrestling won’t make it any easier for him to get it there. It will make strickland somewhat wary on the feet though and in what’s likely to be a closely contested fight just one or two visits to the mat could be enough to swing the fight in Allen’s favor.