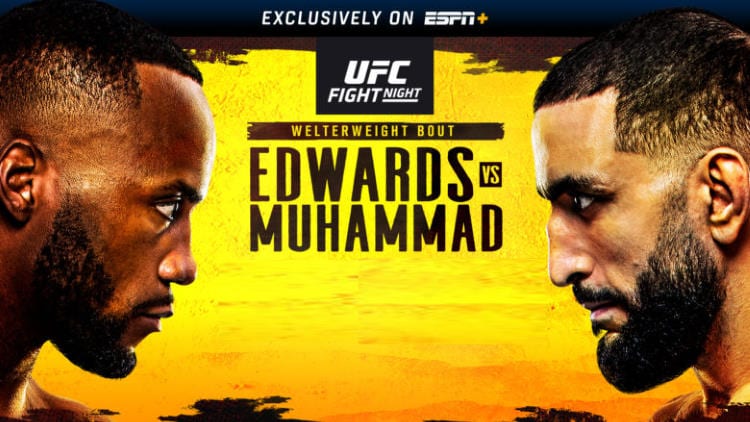 It’s been well over a year-and-a-half since Edwards last stepped foot in the Octagon, largely due to a mixture of Covid-19 and fights falling through, and that’s been unfortunate to see as he was riding a wave of momentum prior to that after racking up eight wins in a row.

Originally scheduled to fight Khamzat Chimaev on multiple occasions, he’ll now go up against a late replacement in Muhammad, who just picked up his fourth win in a row last month and now lands his biggest fight to date.

Given the short notice nature of this one it’s actually to a bad match-up at all as both fighters are well-rounded and well conditioned too.

Edwards is a good technical striker and will be aided by a 4″ height and 2″ reach advantage here, but has also developed his wrestling game very nicely and has not been afraid to use that during his time in the UFC, at times grinding out wins on the mat rather than looking for a big finish on the feet.

Muhammad is a pressure-heavy fighter who will burst forward throwing a higher volume of strikes than Edwards, while also mixing things up with his wrestling, but he’s never been much of a finisher.

Edwards long layoff is a concern against a fighter who will push the pace from the opening bell, but I do think that ‘Rocky’ has the higher skill-ceiling here. I can see his straight punches down the pipe from range being a key weapon to pick apart the slower, less technical strikes of Muhammad, and that will help him on his way to a unanimous decision victory.

Two proven finishers on show here, with Cirkunov having stopped 13 of his 15 career wins inside the distance, while Spann follows suit with 15 stoppages from 18 wins.

For Cirkunov those finishes have often come fast (11 in the first round) and primarily by submission (9), but the downside for the Canadian is that he’s also proven prone to being stopped by strikes rather quickly too in recent years, suffering three first round T(KO) losses in the Octagon.

That’s music to Spann’s ears as though he’s actually coming off a KO loss, he should be the more dangerous and less fragile striker of the two here and has a 2″ height and reach advantage to work with.

That being said, like Cirkunov, Spann is actually at his most potent on the mat and also has good submission skills.

Nevertheless, I believe Cirkunov is the superior and significantly stronger grappler and will be bringing his mix of wrestling, BJJ and Judo to bear quickly against Spann, whose takedown defense isn’t the best, and secure a submission victory in the opening round.

Prediction: Misha Cirkunov to win by submission in Rd1.

Two well-matched fighters here who have the ability to be competitive wherever the bout takes place.

Ige was riding a six-fight winning streak prior to his loss against Calvin Kattar last time out, while Tucker has won his last three fights in a row and is 4-1 overall in the UFC.

While both are at their best on the mat, they do a solid job on the feet too, without being too much of a finishing threat. Ige will have a sizeable reach advantage and will likely have some success against his opponent’s weaker defense, but Tucker is as tough as nails and should push a higher pace and throw more volume.

On the mat things they are very close, with good wrestling and submission ability on display. Tucker will be more active with his submission attempts, but while Ige can also go down that route too, he will prioritize control on top.

This one could go either way, but Ige is the younger fighter and yet has more high-level experience and I think he can edge out this fight by getting the better of the grappling exchanges to carefully work his way to a decision victory.

Grant’s UFC career got off to a rough start with losses in three of his first four fights, but he’s turned things around lately with two wins in a row, while Martinez has been more consistent, running a 4-1 record, and even his split decision loss during that period was debatable.

It’s worth noting that Martinez actually fought up at 145lbs last time out and came away with a notable decision win over Thomas Almeida and that speaks to the quality of his technical striking, working well from range, but also possessing dangerous knee strikes too at closer range.

Grant’s shown off improvements to his own stand-up game during his recent Octagon outings, but I don’t see him doing too well if he chooses to just stand and trade with Martinez here. Instead, Grant will likely focus on his ground game, as he has solid wrestling and a dangerous submission game that accounts for eight of his 12 career victories, although his submission defense isn’t so hot.

I think Martinez can stuff takedowns here and will force Grant into a stand-up fight that he’s going to be outgunned in, leading to ‘The Dragon’ securing a comfortable decision victory.

Rizin veteran Kape comes into this one on only a week’s notice after losing his UFC debut against Alexandre Pantoja by decision only a month ago. On the other hand, it’s been well over a year-and-half since Nicolau’s last fight and he’s returning to the UFC after being released back in 2018 despite having won three of his four fights in the Octagon at the time.

Kape wasn’t at his best in his debut, but he should be able to adjust to life in the UFC as he’s already fought plenty of good opponents during his time in Japan and has a proven knack for finishing fights, particularly thanks to his boxing ability and raw power, though he’s also a submission threat too.

Nicolau is a capable-enough striker, but he’s not as heavy-handed as Kape and works best on the mat, where he’s able to flex his submission game, which includes not one, but two Japanese necktie finishes – one of which came in his UFC debut.

It’s a bit tricky to call this one given Nicolau’s long layoff and Kape’s quick turnaround after a slightly disappointing debut. If it stays upright I do like Kape’s chances, but I think Nicolau will have more to offer on the mat and as such will emerge with a second round submission finish.

Prediction: Mateus Nicolau to win by submission in Rd2.

Both Anders and Stewart are fairly solid fighters, but they’ve struggled to really make their mark in the UFC so far, picking up as many losses as they have wins.

Each is coming off a loss, though Stewart deserves credit for taking one of the division’s rising stars Kevin Holland to a split decision, while showing off a new wrinkle to his game with his first ever submission win against Maki Pitolo before that was also a feather in his cap.

Anders doesn’t excel in any one area, but he does have solid boxing and wrestling ability. He likes to strike, but it feels at times as if he’s holding something back and is also a bit too hittable – though his chin has held up so far as he’s only been stopped once in his career to date.

Stewart is a good striker and though he’s not being stopping opponents by strikes he does have notable power. He’s should be the more aggressive and busier of the two here, which I think will be to his advantage.

Stewart’s also a competent wrestler, though I don’t think he’ll want to be stuck under Anders for extended periods, so I expect him to try to keep this one standing and believe he will be more active and outland ‘Ya Boi’ to earn himself a decision victory here.