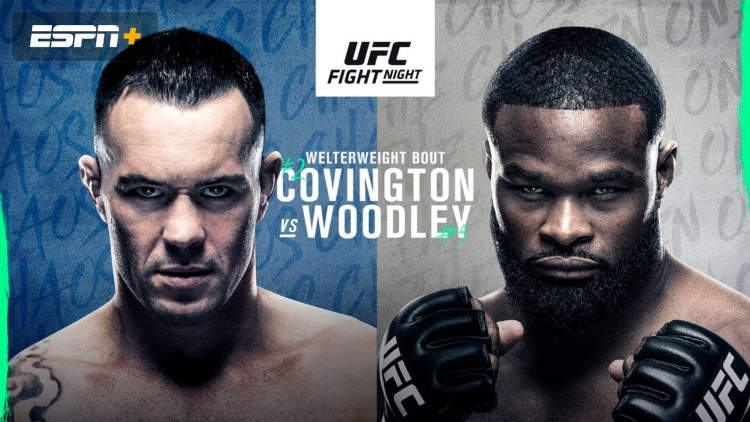 There’s a great main event for this card as we see Covington return for the first time since his bid to win the welterweight title ended with a TKO loss to Kamaru Usman, while former champion Woodley also looks to get back to winning ways.

Despite his loss to Usman, Covington still looked very good in that fight, but it does leave you wondering how much of a toll it took on him being in such a damaging encounter that left him with a broken jaw and ended his lengthy winning streak.

On the other hand, Woodley hasn’t looked good at all in his last couple of fights, including against the aforementioned Usman, who made manhandling him look surprisingly easy. Truth be told, even at times during his title-reignWoodley rarely seemed to be living up to his full potential with an ultra-cautious style that seemed to be built more around a fear of losing rather than an urge to win.

Still, this is an interesting clash of styles on the feet as Woodley is a counter-striker with devastating power, and Covington is the kind of pressure-heavy, volume orientated striker whose willingness to engage will afford ‘T-Wood’ opportunities to do what he does best.

Nevertheless, if he can’t land the big fight-ender he’s looking for then I think he’s going to struggle to deal with the relentless output and pressure from ‘Chaos’, plus though he has a strong wrestling background too, the Usman fight showed that he’s far from immune to being taken down. Covington will gladly chain takedown attempts together, and even if it doesn’t pay off early in the fight, it will wear on Woodley’s energy reserves and enable him to put his own exceptional cardio to good use in the later rounds.

While he has skills at his disposal to potentially win this fight I just have a hard time picking this 39-year-old version of Woodley. He seems to be struggling to find anything like a top gear in recent years, which is a big concern when going up against someone like Covington, who leaves it all in the Octagon every time he fights, so I’ll take ‘Chaos’ to get the decision win here.

Cerrone’s insistence on fighting frequently for so many years at the highest level was always going to take it’s toll eventually, and it’s led the 37-year-old to four losses in the space of a year, with three of those coming by way of TKO. In his defense though it should be stressed that he was fighting top-flight talent.

Like Cerrone, Price is all-action fighter and his kill-or-be-killed style has seen him win three of his last six fights by way of clean KO, while losing the other three by t(KO), so there’s a strong chance that this fight has a violent conclusion.

In terms of sheer ability I’d have to say Cerrone is the better fighter here. He’s a very technically sound striker with kicks and punches from range, the threat of big knees if his opponents move closer, and a nice ability to transition smoothly to takedowns attempts if the opportunity presents itself, which can set up his dangerous submission game – which despite all his stand-up wars still remains his most proven weapon for finding a finish.

Technically Price might not be on the same level, but he’s still a good striker with big power and though he has a few tough losses on his recent record he’s still only 30-years-old and seems fresher than Cerrone.

Cerrone is such a savvy veteran that there’s always a reluctance to pick against him, particularly in a fight that a few years ago I’d have favored him to win. I’d like to see him use his ground game here, but I think Price will lure him into a stand-off on the feet and there’s clear signs ‘Cowboy’s’ chin is not reacting as well to big blows as he did in the past, his body is vulnerable and he’s slowing down.

Meanwhile, Price is going to be bringing the fight to him from the opening bell, swinging for the fences and offering an unpredictable offensive arsenal from unusual angles, which I think will eventually catch Cerrone out, leading to a TKO stoppage.

Chimaev has quickly been marked out as a force to be reckoned with after comfortably winning two fights in 10 days on the UFC’s last visit to Fight Island, while being compared to Khabib Nurmagomedov.

That could add extra weight to the shoulders of the 26-year-old, but he appears to exude confidence and, for better or worse, has actually already been plotting a quick return to action after Saturday night’s fight.

Meerschaert may well take that personally as he’s an experienced campaigner with over 40 fights and has had some nice wins in the UFC courtesy of his solid submission skills, though overall he’s achieved only a 6-5 record in the Octagon and is coming off a 74 second TKO loss to Ian Heinisch in June.

Meerschaert is the more natural middleweight here, with Chimaev bobbing back and forth between welterweight and so the veteran will hope that can aid him in the grappling exchanges. On the other hgand, Meerschaert is a bit of a plodding 185lb’er at the best of times on the feet and so Chimaev’s speed advantage will be even more pronounced here.

I don’t like that Chimaev is looking past Meerschaert, but nonetheless I do believe he does have the edge in most areas here and whether being the quicker, more aggressive fighter on the feet or utilizing his relentless wrestling and ground and pound he’s going to set a pace that his opponent will struggle to keep up with to emerge with a TKO victory.

Prediction: Khamzat Chimaev to win by TKO in Rd2.

A bit of a wildman, Walker burst into the UFC in style with some swift and spectacular highlight reel finishes, but since embarassingly managing to injure himself during his post-fight celebration after a 36 second KO finish of Misha Circunov last year, his hype train has been derailed with Corey Anderson TKO’ing him in the first round and then Nikita Krylov schooling him on the mat last time out.

Meanwhile, Spann comes into this one with plenty of confidence after winning his first four UFC fights. He doesn’t have Walker’s flashy offensive arsenal of strikes, but the former LFA champ has solid enough stand-up, decent wrestling and also a very dangerous guillotine choke that’s caught out numerous opponents over the years.

It’ll be interesting to see how Walker approaches this one after his recent losses. Hopefully he will be able to reign in his aggressive flair just enough to help shore up his defensive liabilities, while still taking advantage of his speed, athleticism and timing to maintain a big threat on the feet.

Overall I’m going to lean towards Walker here as he’s the bigger threat and I’m not convinced Spann will have the output or power to discourage him from throwing whatever he feels like in search of a big finish, leading to a first round TKO stoppage.

Prediction: Johnny Walker to win by by TKO in Rd1.

The hype train for Dern has slowed down a lot in recent times, but she still remains a world-class grappler and that will be a cause for concern in the Markos camp, as she also tends to be at her best on the mat when able to utilize her wrestling.

Markos has a long history of alternating between wins and losses in her 10-8-1 career to date, and her underwhelming striking is partly to blame. That’s good news for Dern, as despite having solid power her own stand-up still leaves a lot to be desired, so she’d struggle against a more technical striker, who’d be able to pick her apart. Here though she should be able to hold her own, and that leaves her opponent with few ways to win.

Dern’s takedowns aren’t the best, but I think Markos’ wrestling instincts will mean the fight does hit the mat at times, and that will spell trouble for her as the BJJ ace shows off her skills and locks up a second round submission finish.

Prediction: Mackenzie Dern to win by submission in Rd2.

It’s only been a little over a month since these two last stepped into the Octagon, with Stewart, who is very much known as a striker, pleasingly showing off improvements to his ground game by locking up an early submission victory over Maki Pitolo, while Holland KO’d newcomer Joaquin Buckley on the same show.

The striking battle should be interesting, with Holland having good kickboxing and enjoying a 3″ height and 7″ reach advantage over Stewart, who will be the bigger puncher and more physically powerful fighter here.

Despite Stewart’s recent submission win I do still think that Holland will have a significant technical advantage on the mat here, and I think that leveraging that while keeping his opponent at bay from range on the feet when required will enable him to secure a decision victory here, though I wouldn’t rule out a submission stoppage either.