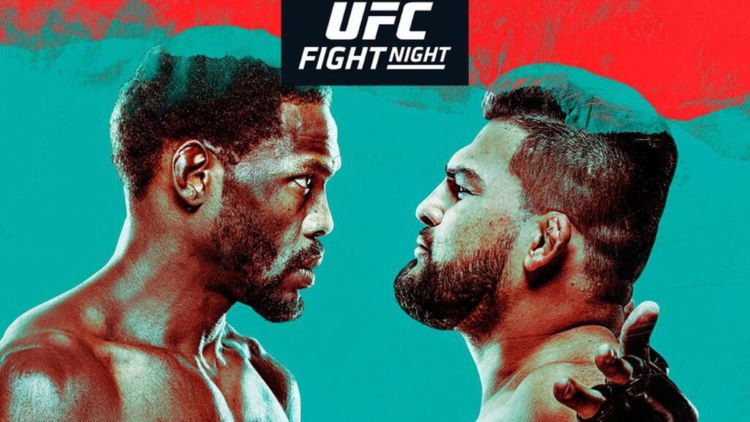 Cannonier may have lost to ex-champ Robert Whittaker last time out, but the 34-year-old has impressed in recent years after a gradual progression that saw him start at heavyweight, then light-heavyweight and finally middleweight, where things finally seemed to fall into place for him.

A change in weight hasn’t quite been as successful for Gastelum. Truth be told he’d probably rather still be fighting at welterweight, but a struggle to make that weight on the scale forced him to compete at 185lbs instead, despite his relatively small, stocky build for the division.

With that in mind it’s a credit to Gastelum that he’s picked up some nice wins in the weight-class over the years, but he’s consistently going up against some of the best the division has to offer, and recent results haven’t been going in his favor, having now lost four of his last five fights.

So, it’s a familiar story for Gastelum here as he goes up against a bigger, physically imposing man, who has 2″ in height and 6″ in reach over him. And as usual it’s Gastelum’s natural gifts that he’ll attempt to use to make up the difference, with his very fast hands and movement, notable power and proven durability, together with solid wrestling making him a challenging opponent to deal with.

Cannonier is a thunderous, yet accurate striker, with his heavy hands being backed up by debilitating leg kicks and nasty elbows, and there have been signs of improvement to his defensive grappling, although he’ll certainly be looking to avoid getting into those types of situations with Gastelum.

It’s worth noting here that Cannonier tends to win inside the distance, but Gastelum’s never been finished by strikes in his career and has more five-round experience, so that will give him confidence.

If Gastelum can make good use of his wrestling then that could be the difference-maker here, but I’m not convinced it’ll play out that way. Instead I’ll slightly edge towards Cannonier getting the better of the stand-up with his longer reach and leg-kicking ability keeping Gastelum at bay and taking a gradual toll on him that’ll lead to a win on the scorecards for ‘The Killa Gorilla.’

Approaching 40-years-old, long-standing UFC veteran Guida picked up a valuable win over Michael Johnson last time out that took some pressure of him, having lost three of his previous four fights before that.

Now he’s facing an undefeated fighter in the shape of former Olympic wrestling silver medalist Mark Madsen, who has gone on to forge a 10-0 run in MMA so far, including two wins in a row inside the Octagon.

This is a significant step up for Madsen though and despite his advanced years, Guida is still as much of a tireless workhorse as ever, even if he’s not as durable as he once was. However, when he’s at his best he tends to be getting the fight to the floor and dominating on top, which is going to be a tall order against an elite wrestler like Madsen.

And while he’s been looking to develop his other skills, there’s no doubt that Madsen is going to be looking to take this fight to the ground early and often, and I think he will have success in that regard.

The biggest concern for Madsen is that he has somewhat questionable cardio, and that’s something that Guida has no issues with as he’s famed for his endless energy reserves. So it’s possible that Guida could wear out his opponent late in the fight, but I don’t see him being able to get a finish even in that scenario, so I’m taking Madsen to wrestle his way to a decision win.

Two heavyweight’s with fairly unremarkable career records clash here, with Sherman coming off a loss, while Porter picked up his first win in the Octagon back in November of last year after TKO loss in his promotional debut.

Sherman is now in his second UFC stint, and to tell the truth he’s never faired particularly well, picking up only 3 wins from 9 fights, but he does offer up a high-volume offensively on the feet, mixes up his strikes and has a good finishing record, but at the same time he’s porous defensively.

Sherman will have a 4″ height and 3″ reach advantage over his opponent here, though Porter is the heavier of the two, tipping closer to the heavyweight limit, but isn’t in the best shape physically.

Like Sherman, Porter can eat a lot of strikes, seeking to land something big of his own, while he does have something of a submission threat on the mat too. I don’t see him getting his opponent down here though, so it’s going to be a bit of a slugfest on the feet, and I think Sherman’s better cardio and volume will enable him to earn a third round TKO win.

Prediction: Chase Sherman to win by TKO in Rd3.

Pichel heads into this fight off of back-to-back wins and is 6-2 overall in his UFC campaign, while Hubbard has struggled with consistency so far during his 3-3 run in the promotion.

At 38-years-old, Pichel is no spring chicken, and indeed is nine years older than Hubbard, but he’s stayed in good shape to push his grinding style for three rounds, having solid power in his hands, but also being a physically strong wrestler who can control the action on top.

Hubbard is a respectable all-rounder too, though he doesn’t have as much pop in his punches and has had a weakness to wrestler’s at times in the past. His ground game is solid though and he’s got good cardio, which enables him to try to wear down opponents with his work-rate.

Given Pichel’s age, it’s certainly possible that Hubbard could start to gain the upper-hand later in the fight, but I feel Pichel will likely have edged out the action for long enough to have a couple of rounds in the bank by then, so I’m taking the veteran to win by decision.

Despite only going 2-2 in his last four fights, Pantoja still holds the No.3 spot on the flyweight rankings heading into this fight, while Royval is placed at No.6 after a two-fight winning start to his UFC run was ended with a loss to the man who has since become the champion, Brandon Moreno.

These are two talented, well-rounded fighters, so it’s going to be fun wherever the fight goes. Of the two I’d give Pantoja the stand-up advantage as he’s got good stopping power for the weight-class and he’ll be the more active of the two, but Royval is comfortable exchanging too and will have a 4″ height advantage, though only an extra inch in reach.

Royval’s more likely to get a finish on the mat via submission and is good in the scramble, but Pantoja is just as capable with his own grappling, so there’s no clear winner there.

This is going to be an entertaining scrap, but overall I feel Pantoja has that bit more to his game, particularly on the feet, and that will be enough to see him win a closely contested decision verdict here.