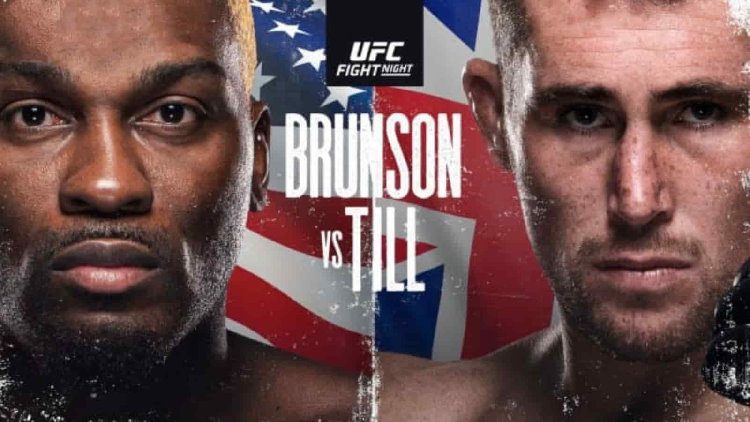 Derek Brunson vs. Darren Till

These two are closely situated on the middleweight rankings, but the reality is that the No.5 placed Brunson is on a far better run of form lately, having won four fights in a row, while the No.7 ranked Till has only had his hand raised once in his past four visits to the Octagon.

To be fair, two of those losses for Till were at welterweight, but nonetheless the 28-year-old has a lot to prove heading into this one.

At his best he’s certainly a talented striker with accuracy, technique and finishing power, alongside solid takedown defense, but he tends to have a lower offensive output than you’d like to see from someone with his ability.

Till’s takedown defense could be vital as Brunson has had significant success utilizing his wrestling, though he is also a threat on the feet too.

However, while Brunson has big power, he can be somewhat reckless with his striking and goes all in on his punches at times without really setting them up effectively or applying them with sound technique.

With that in mind I think Till could have real opportunities here to keep his distance and carefully chip away at the holes in Brunson’s striking defense, and assuming his takedown defense also holds firm when necessary then I can see him emerging with a decision victory here.

Prediction: Darren Till to win by decision.

Spivak comes into this fight on just a week’s notice after Sergei Pavlovich was forced to call off due to Visa issues, and it comes at a time when the 26-year-old Moldovan is riding a three-fight winning streak.

That matches up with Aspinall, who has also compiled three wins in a row since joining the UFC last year, leaving them both looking for entry into the heavyweight top-1o, with Aspinall currently at No.13, while Spivak is just one place behind him.

At 28, Aspinall is relatively young by heavyweight standards and has very good boxing technique for the division with good volume and power, while he can also wrestle, has a BJJ black-belt and is in good shape physically.

Spivak is even younger at 26, and while he’s not as potent of a finisher as his opponent, he too is a fairly well-rounded fighter, being able to mix it up on the feet, though he’s stronger on the mat with his wrestling and submissions.

It’s unfortunate that Spivak didn’t have more time to prepare here, but even if he did I still feel that Aspinall would still emerge victorious here as he’s more dangerous, technical and agile on the feet with his boxing, will applying more pressure and being the better athlete of the two will help lead him to a second round TKO stoppage here.

Prediction: Tom Aspinall to win by TKO in Rd2.

Morono comes into this fight on short-notice, but high on confidence after TKO’ing Donald Cerrone last time out, while Zawada has lost three of his last four fights in the promotion.

Cerrone is clearly now past his best, so perhaps the win over him flatters Morono a little, but he is a solid all-rounder who applies good pressure on the feet and stays active offensively with punches and kicks, while he can also grapple too and has several wins via submission.

As for Zawada, it’s worth keeping in mind that a couple of his UFC losses were by split decision.  He too is capable in most areas, though I’d say it’s his work on the mat that could offer his best chance to best Morono here.

However, I feel Morono is the busier and more effective striker of the two, and I think that’s going to enable him to get the better of the action here and win by decision.

Bukauskas started of his UFC campaign with a TKO victory, but he’s since been beaten twice, while Rountree has only secured a win once in his last four bouts.

Both are striking orientated, with Bukauskas having a couple of inches in height and 1.5″ in reach over his opponent, which he will suit him as he operates best from range and is  effective off the back foot with his counter-striking.

Rountree has developed very nice muay thai technique and has good power in his punches together with heavy leg kicks too, but he seems to be wary of his cardio at times and so he his output can decline if he doesn’t find a finish early.

It’s definitely a fight that’s up for grabs, but I think Bukauskas range management will help him steer clear of Rountree’s power punches, while also being able to counter off of them, leading him to a win after 15 minutes of stand-up action.

Prior to making his UFC debut on Saturday night, Pimblett had been likened to Conor McGregor due to having also made a name for himself as a popular champion in the Cage Warriors promotion and having a similar charismatic persona.

It’s perhaps surprising it’s taken so long for him to get here, having compiled a 16-3 record along the way, but he specifically chose to spend more time developing on the regional circuit first and now he finally looks to make his mark on the big stage against Vendaramini, who has only mustered one win from his three UFC fights to date.

The 26-year-old Pimblett’s biggest strength is his slick, cerebral Jiu-Jitsu on the mat with good submissions, scrambles and transitions making him a real handful to deal with, but his striking has developed over time too.

Vendramini’s UFC run has been badly hampered by having to undergo two ACL surgeries in a row, which kept him out of action for two years, but given that he’s still only 25, his skill-set is fairly well-rounded, whether he’s striking, wrestling or grappling.

I feel Vendramini will have the advantage on the feet here and carries more power in his strikes, so there is a chance for him to spoil the welcome party here.  He does like to grapple too and I think that’s where Pimblett’s crafty skills can gain him the upper-hand and will help him to a second round submission victory.

Prediction: Paddy Pimblett to win by submission in Rd2.