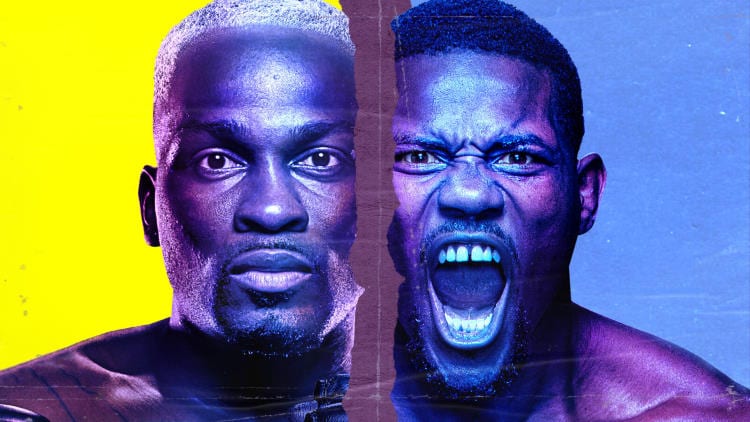 Holland was on a mission in 2020, compiling a five-fight winning streak that’s put him firmly on the map at 185lbs, while Brunson only fought once, but earned a TKO win over Edmen Shahbazyan to go three-fights unbeaten.

The tall, lanky Holland works his kickboxing well from range and will have a 2″ height and 4″ reach advantage here – valuable tools against an explosive striker like Brunson, who will surge forward looking to land fight-ending blows.

Brunson has speed and power on his side, but he can be overly reckless and aggressive at times – a problem that’s accentuated by having a questionable chin, which has resulted in five of his seven career losses coming via strikes, with all but one of them occurring during his UFC run.

However, as well as his heavy hands, Brunson also has good wrestling and is willing to use it, which could be a big factor for him since Holland’s takedown defense is far from flawless. Holland is hard to hold down though and as well as having some submission ability he showed last time out against ‘Jacare’ that even sitting down his punches can still change the course of a fight.

There’s certainly opportunities for both men to win here, but I think Brunson will leave himself too open to getting caught while he’s trying to close the distance in less than technical fashion, and with his chin issues that’ll cost him dearly, leading to a second round TKO stoppage victory for Holland.

Prediction: Kevin Holland to win by TKO in Rd2.

Gillespie was riding a perfect 13-0 record heading into his last fight in 2019 against Kevin Lee, but since being head kick KO’d by him in the first round he’s disappeared off the radar, and meanwhile Riddell has been compiling a three-fight winning streak since joining the UFC, taking his overall record to 9-1.

This fight is a clear clash of styles as Gillespie excels at dominating his opponents on the mat with his very strong wrestling ability, while Riddell is an experienced kickboxer, who will be eager to keep this one upright, where he should have a significant advantage.

In general, Riddell has shown a good ability to get back to his feet when he’s been taken down, but that’ll be easier said than done against a stifling wrestler like Gillespie, and even when he does stand, there’s every opportunity he’s going to be quickly put right back down again by his relentless opponent.

So, Riddell will have to make the most of his limited striking opportunities and as capable as he is, I don’t think he’s wielding the kind of power that’s going to make that likely and Gillespie will emerge with a grinding decision victory.

Tuivasa’s UFC career appeared to be hanging by a thread after losing three fights in a row in 2018-2019, but a first round KO victory over Stefan Struve has steadied the ship and he now faces a very late replacement in Harry Hunsucker after Don’Tale Mayes had to withdraw due to an injury.

Hunsucker comes in on just a few days notice after previously having failed to win a spot in the UFC via the Contender Series, losing by first round TKO last year, though he has since picked up a quick KO win on his return to the regional circuit.

Hunsucker is more well-rounded than Tuivasa, who is all about beating his opponents on the feet with his muay thai ability and knockout power. On the other hand, Hunsucker can wrestle and has submission skills too, so those are key factors for him here.

With that being said, Hunsucker’s level of competition to date has been rather underwhelming and he’s tended to come unstuck when he’s gone up against fighters who don’t have a losing record.

He’s also nicknamed ‘The Hurricane’ and does tend to surge forward in a manner befitting of that moniker, which could be a recipe for disaster against a more technical, KO specialist like Tuivasa, so I feel the Aussie has a chance to secure an early finish here.

Prediction: Tai Tuivasa to win by KO in Rd1.

Yanez will enjoy a 2″ height and 3″ reach advantage here that plays nicely into his game as he is somewhat of a sniper from range with his boxing, and a heavy-handed one at that, having won four his past five fights by strikes.

Lopez carries power too and will look to apply pressure on the feet, but though he’s durable, that could lead to him running onto big counters, so he would be better served looking to utilize his ground skills as Yanez ground game is still relatively untested.

Yanez takedown defense could well be enough to stop Lopez attempts to get him to the mat though and on the feet I think his superior striking will earn him a win on the scorecards, if not a stoppage win.

Kenan has more momentum heading into this one as he’s gone 4-1 in his UFC run to date and is coming off a KO win against Callum Porter, while Griffin also picked up a win last time out via TKO against Ramiz Brahimaji, but had lost four of his previous five fights before that.

Those records as somewhat deceiving though as Kenan’s standard opposition in the UFC so far has been particularly weak, while Griffin’s defeats have come against more notable names, including taking both Alex ‘Cowboy’ Oliveira and Thiago Alves to split decisions.

Despite being an inch shorter than Kenan, the boxing-orientated Griffin will have a 5″ reach advantage to work with and he’s got good power too, but has a troubling tendency to get rocked at some stage in his fights. To his credit, he’s actually only been stopped by strikes once in his career, but you never know when the 35-year-old’s chin might give way.

That’ll be an enticing prospect for Kenan as he is an active and potent striker, though he is quite hittable too. The bigger problem for Kenan though is his lack of wrestling, and that happens to be another area in which Griffin performs well.

Griffin can be lured into a striking battle though, so Kenan will have his chances here, but I think Griffin will gradually lean more on his wrestling as the fight goes on to ensure he emerges with a decision victory.

Hailing from the Invicta FC promotion with a 9-1 record, Ruiz accepted this fight on short notice, while the 5-1 Buys is also making her UFC debut after a win on the Contender Series last year.

An unusual twist to the tale here is that Buys husband JP is also scheduled to make his UFC debut earlier in the evening, so there will be extra pressure and emotion attached to that, though we are tipping him to win.

Ruiz is small even at strawweight, giving up 3″ in height and 2″ in reach to Buys. She’s a hard worker though and has a solid wrestling base, while she’s showing signs of improvement in her striking and submission game too.

Buys is the less experienced of the two as a pro, but has an extensive amateur background and she’s shown promise with her high-volume striking and good movement, while her takedown defense could be a significant factor here too.

Overall I feel Buys has the edge here and will look to keep this one standing and outstrike Ruiz to earn a decision victory.