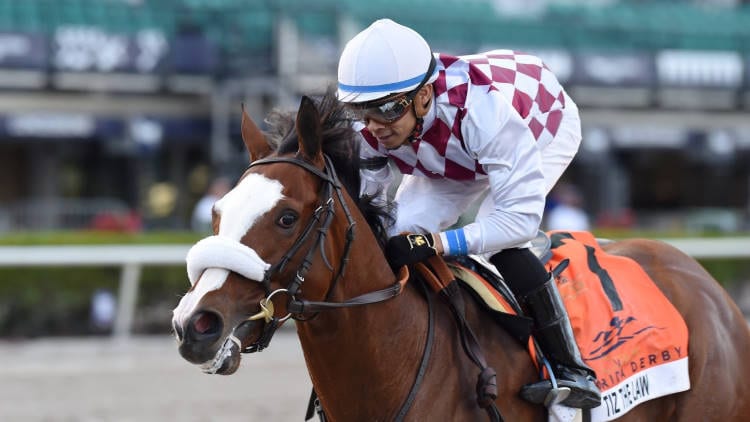 We have expert betting tips for the 2020 Breeders’ Cup Classic which features some of the world’s best dirt-track horses.

It is a must-see race at Keeneland and punters are getting a great field to bet into. It has Kentucky Derby winners and form from all around the US.

We have a runner-by-runner guide for the 2020 Breeders’ Cup Classic.

Our best bets for the Breeders’ Cup Classic 2020

Punters should have five runners on their ticket on their Breeders’ Cup Classic trifecta. With so many champion thoroughbred in the field, punters need to include them.

Taking first-four bets in the big races is always a sound strategy. The pools are big and they pay more than other exotic betting types.

We have included six runners in our first-four selections for the Breeders’ Cup Classic.

It wasn’t long ago that Tacitus was the hot commodity in US racing, but he is racing a touch below his best. The four-year-old scored a win three back but has been held in two runs since.

He couldn’t get past Global Campaign last start, and that’s not the best form guide for the Breeders’ Cup Classic.

Tiz The Law couldn’t quite pull off the Kentucky Derby win, but racing at this distance is ideal and punters are getting a fair price.

The Barclay Tagg-trained three-year-old has plenty of upside and although facing a field with more depth, he must be respected.

We like his chances of turning that result around.

Comes into this race with four wins and two second placings. He is a six-time winner overall and although yet to face this level of opposition, he won the Grade 2 Alysheba Stakes in September.

A similar effort would take him close and punters are getting odds worth taking.

Respected in betting following a third placing behind Improbable last start. He will need to turn the tables on the first two home in that race, but there is market confidence.

He is a winner of 11 races in this distance range, so he is a professional winner that knows how to cross the line in first.

Keep in mind for first-four bets.

Not the most consistent type and he looks to be held at this level. Bookmakers are winding his odds out, and they could reach triple figures on race day.

Yet to win this campaign and he finished sixth lengths behind Maximum Security in the Pacific Classic Stakes.

We’re not sure he’s good enough to turn the tables against such a high-quality field in the Breeders’ Cup Classic.

Comes into this on the back of consecutive wins and he managed to beat Tacitus by 1.75 lengths. That was a nice win, so we can’t rule him out, but it’s not the best form guide.

Tacitus isn’t the same horse he used to be and although this four-year-old has upside, he would need to find a couple of lengths.

The deserving favourite after rattling off three quality wins in succession. All three wins have come in top grades and trainer Bob Baffert rarely puts a foot wrong.

He doesn’t go on top in our selections because the $3.50 price is a touch short and we don’t think this is his best distance.

However, he is a must-have on your ticket for multiples.

He lives up to his name and rarely puts in a bad effort. The three-year-old is coming off a campaign including four wins and two second placings.

He almost won the Preakness Stakes when being upset by Swiss Skydiver, but he didn’t lose any admirers with the run.

Prior to that he got the better of Tiz The Law, so there is plenty to like about the $6.50 odds.

Another high-quality runner that has won five of his last six starts. His only recent defeat came behind Improbable in the Awesome Again Stakes, and there is nothing wrong with that form.

The Baffert-trained runner is a must-have on your ticket, especially at the $5 quote.