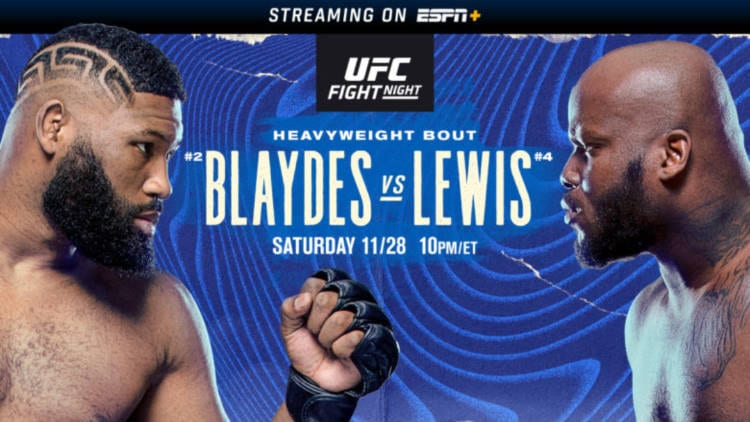 This is an important fight for the heavyweight division, with Blaydes being on the verge of title contention as the No.2 ranked contender courtesy of four wins in a row, while Lewis is not far behind at No.4 with three consecutive wins under his belt.

In fact, so far the only man who has been able to beat Blaydes is Francis Ngannou on two separate occasions thanks to his heavy-handed KO ability and so that must give ‘Razor’ some sleepless nights heading into this one given that ‘The Black Beast’ is one of the few men who can match that kind of punching power.

Still, Blaydes stand-up is improving and he’s seen off other strikers in the past like Mark Hunt, Alistair Overeem and Junior dos Santos, and with his wrestling ability and solid cardio it’s not hard to see a clear path to victory here if he just takes Lewis down and controls him on the mat.

Lewis will always have a punchers chance, but his gas tank is notoriously shallow and will be drained trying to fend off Blaydes constant takedowns and mat work, which will pave the way for ‘Razor’ to secure a ground and pound TKO in the fourth round.

Prediction: Curtis Blaydes to win by TKO in Rd4.

It wasn’t so long ago that Smith was a title contender at 205lbs, but now he’s just trying to regain his footing in the division after suffering defeat in three of his last four fights.

For the first time in his light-heavyweight run he faces an unranked opponent in Clark this time, who has so far compiled a 6-4 record in the UFC to date and is coming off back-to-back wins.

Smith is the more skilled fighter here and a proven finisher by both strikes and submissions, but if he’s starting to go off-the-boil then Clark could punish him with his more grinding approach, utilizing his wrestling base along with clinch work and thudding leg kicks on the feet.

So far in his UFC career Clark has faltered when he’s reached a certain level of opposition, and with that in mind I will take the more dangerous Smith here to find a finish by strikes in the second round, even if there is a nagging concern that he might be a bit jaded.

Prediction: Anthony Smith to win by TKO in Rd2.

It’s been a bit of a rollercoaster ride for the debuting Parisian to get here as he initially picked up a win on the Contender series in 2018, then was drafted into the Ultimate Fighter 28 show where he suffered a loss, and then dropped to another defeat on his return to the regional scene.

With that in mind, Parisian deserves credit for his turnaround since, going on to win his next five fights in a row, which earned him another Contender Series spot, picking up a win via KO back in August.

In his first official UFC fight he’ll be taking on Porter, who lost in his debut a few months ago and has an underwhelming 9-6 record overall.

Parisian is the heavier handed striker here and will have a 4″ height and reach advantage. His ground game defensively is a weak point and as such he has to be wary of Parker’s submission threat, but I’m just not convinced that his opponent really belongs in the UFC and I think he’ll be able to put him away with strikes in the first round.

Prediction: Josh Parisian to win by TKO in Rd1.

Another Contender Series recruit, Baeza has quickly put himself on the UFC map with TKO wins against Hector Aldana and Matt Brown in the Octagon so far, leaving him with a perfect 9-0 record, while Sato has gone 2-1 in to date in the promotion and is the more experienced fighter overall with a 16-3 record.

The win over Brown was certainly a nice feather in Baeza’s cap so early in his career, but of course the veteran is very much at the tail-end of his career and actually had his younger opponent in trouble at times, so we can’t read too much into that.

Both men are primarily strikers and have become accustomed to ending their fights inside the distance. Baeza has a 4″ height and 2.5″ reach advantage to work with against Sato, who is an effective counter-striker .

It has all the makings of a really competitive fight and I could certainly see Sato having the ability to cause Baeza problems, but I do like the way the up-and-comer has handled himself in the UFC so far and think he’ll rise to the occasion here again to earn a TKO stoppage.

Prediction: Miguel Baeza to win by TKO in Rd2.

Algeo lost in his UFC debut, but there’s no shame to coming off second best against an established veteran like Ricardo Lamas and he had him in trouble at times.

Carlyle picked up a win in his first UFC fight earlier in the year, but lost out to Billy Quarantillo last time out, so he’s still finding his feet in the Octagon too.

That being said, Carlyle has already established himself as a fun to watch, all-action fighter with a powerful physique who will bomb forward and engage with reckless abandon whether on the feet and mat, making up for his lack of finesse with energy and enthusiasm, though it has taken a toll on his cardio in the past.

Algeo is a leaner, lankier fighter who will stand 5″ taller than Carlyle and have an 2.5″ extra in reach too. 6ft is very tall for the 145lb division, but don’t look for him to stay on the outside as he will instead likely meet his opponent in the center of the Octagon and try to apply pressure at close range.

Algeo will be a solid test for Carlyle, but i think he’ll find it difficult to stamp his authority on this fight and the ‘Alpha Ginger’s’ powerful strikes and brute strength on the mat will win him the first couple of rounds, though he might run out of steam later on and have to settle for a decision.l