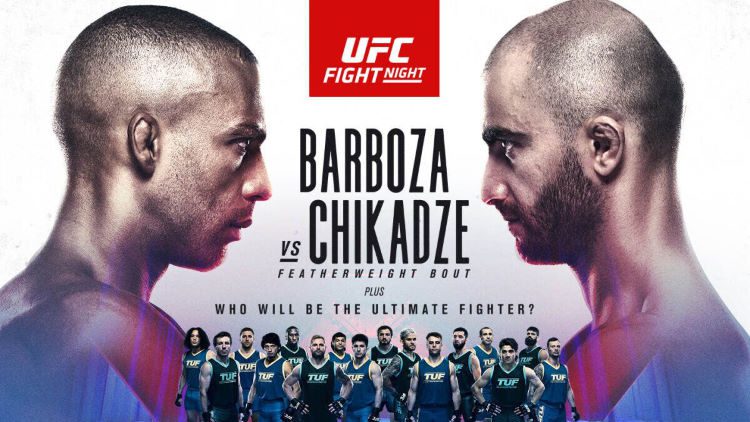 Two top striking talents go to war in the main event, with Barboza coming off back-to-back wins, while Chikadze has yet to taste defeat in his six Octagon outings so far and is coming off two impressive first round TKO finishes in a row.

This really should be a striking masterclass. Barboza has of course been one of the most respected stand-up technicians in the UFC for a long time, with dynamic offense including thunderous, and at times flashy kicks and knees being thrown alongside very solid boxing. On the downside though he is now 35 and has been in a lot of wars over the years, but he’s still in good shape physically, even if there is some wear and tear now.

The 32-year-old Chikadze is also an elite striker though, being a former Glory kickboxer who has gone on to find considerable success in MMA. Like Barboza he possesses very good kicks, and indeed his last two opponents wilted under his nasty laser-accurate liver kick. That doesn’t mean he’s a one-trick pony though as his all-round striking is crisp, calculated and can cause problems for anyone in the weight class.

One thing to note is that while looking at just their MMA records would suggest that Barboza may be less durable, you also have to look at Chikadze’s kickboxing record, where he did suffer a couple of KO losses and was coming off back-to-back defeats in 2017 before switching full-time to mixed martial arts.

So this one’s all set to be a striking spectacle and really could go either way given the weaponry both men have at their disposal. That makes it a tough one to call, but I think Barboza’s all-round striking may be a bit more potent than Chikadze and his vast amount of high-level MMA experience also counts in his favor, leading him to a decision victory.

Unfortunately, this middleweight TUF final suffered a blow when Tresean Gore injured his knee, leaving him unable to compete against Bryan Battle, so instead, the man who he knocked out in the semi-finals, Gilbert Urbina, gets the unexpected opportunity instead.

The 26-year-old Battle impressed during his TUF run to date, showing a well-rounded skill-set despite only having had six fights heading into the show, and hasn’t given many signs of glaring weaknesses.

To be fair, Urbina is a solid fighter too and has the extra credential of coming from a fighting family, with his two brothers being former TUF competitors too, although Hector Urbina slid off the UFC radar after a 1-2 run followed by a failed attempt to return on the show, while Elias Urbina didn’t make it out of the quarter-finals.

The 25-year-old Urbina’s utilizes a lot of movement on the feet and is a capable striker and wrestler, but his last fight was concerning given that he seemed to get hurt by punches rather easily before the KO loss.

In the end it feels like Battle is the more complete and robust fighter at this stage in their careers, and I’ll take him to show it by winning on the scorecard to become a TUF champ.

This bantamweight TUF final sees the 28-year-old Team Alpha-Male product Turcios going up against the younger, less experienced Hiestand, who is only 22-years-old.

Hiestand definitely shows potential for his age, applying plenty of forward pressure, possessing a solid wrestling game and having solid power in his punches.

Turcios has twice as many fights under his belt though and of the two is the better striker, while also having a nice BJJ game to go along with it.

Given his age Hiestand still has a lot of time to make his mark in the sport, but for now I feel Turcios has the better overall skill-set and experience to get the better of the action here and emerge with a decision victory.

After some bad weight-cuts in recent times and mixed results at lightweight, Lee is looking to try his luck at welterweight, and will start by facing Daniel Rodriguez, who stepped in for Sean Brady just a couple of weeks ago.

Rodriguez, who is 4″ taller than Lee, but interestingly still giving up 3″ in reach, is a month removed from a TKO win over a late replacement in Preston Parson, which takes his overall UFC run so far to 5-1.

Lee has a well-rounded skill-set, with strong wrestling, a solid offensive submission game and improved striking. His submission defense has been problematic at times though, accounting for three of his last four losses, albeit against top-quality grapplers.

Meanwhile, ‘D-Rod’ is a forward-pressing striker who puts up high numbers offensively, should have a notable power advantage here and has never been finished inside the distance in his 17-fight career to date.

Rodriguez can also grapple too, but I think this fight is a step up for him and I do believe Lee’s significantly stronger wrestling is going to get the fight where he wants it, and the fact he won’t be depleted by a punishing weigh-cut will be to his benefit too and lead him to a decision victory.

Gillmore came in to TUF 29 as a short-notice replacement and lost in his only fight, but now he finds himself getting a chance to shine on the main card of a Fight Night card against Petroski, who made it to the semi-finals.

Gillmore is primarily a striker who carries power in his hands, but he’s not got the best takedown defense and has shown a significant weakness in his submission defense on the mat both on TUF and earlier in his MMA career, which counts for all three losses on his 9-3 record.

That doesn’t bode well when going up against a strong wrestler like Petroski who also has a submissson game to go along with it, so I think that’s the likely outcome here with Petroski getting him down early and securing the tapout finish sooner rather than later.

Prediction: Andre Petroski to win by submission in Rd1.

Muradov comes into this fight having made a perfect 3-0 start to his UFC career, in addition to having an extensive run on the regional circuit in his native Czech Republic, leaving 31-year-old with an overall 25-6 record.

Meanwhile, the 33-year-old Meerschaert also has bags of experience in the sport, but has had a patchy run in the UFC, going 7-6 overall, though he is coming off a first round submission win against Bartosz Fabinski last time out.

In general it’s Meerschaert’s submission game that’s by far his best weapon, and indeed he has a remarkable record of 24 submissions from 32 career victories, including 6 of his 7 UFC wins.

However, Meerschaert tends to fare less well when he can’t get the fight to the mat and there’s been very troubling signs that his chin is fading in recent times, with Ian Heinisch having TKO’d him in just 74 seconds last year, while just a few months later Khamzat Chimaev made it worse with a 17 second KO finish.

That’s a big concern going into this fight as Muradov has a strong finishing record on the feet, including two stoppages via strikes in his three UFC fights to date while he is also the quicker, more athletic fighter too and hasn’t been submitted in eight years.

Meerschaert is certainly a big step up in terms of grappling credentials though, but I think Muradov’s striking will get the better of him before he has a chance to show that off, resulting in a first round TKO finish.

Prediction: Makmud Muradov to win by TKO in Rd1.