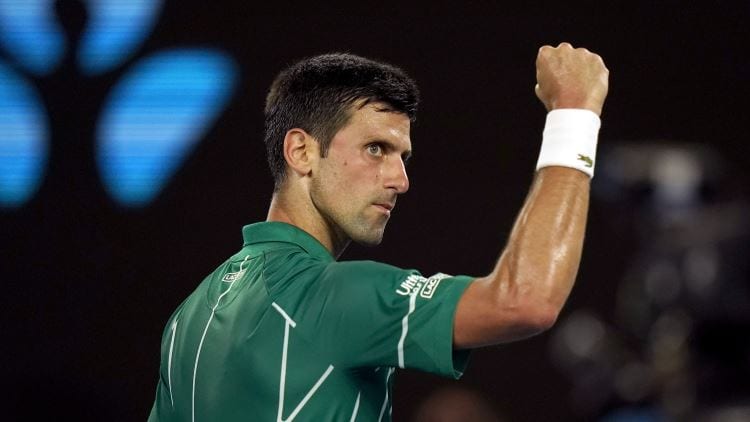 We’re down to two players for the 2020 Australian Open Men’s Final, with Novak Djokovic taking on Dominic Thiem.

Djokovic was expected to make the final and has been the favourite from the outset. However, Thiem had to come through some tough matches to the reach the final.

It’s shaping up to be power vs class. Thiem brings a huge backhand and Novak brings in a wealth of Grand Slam-winning experience.

We look at the best betting opportunities for the Australian Open Final this Sunday in Melbourne.

The 26-year-old Austrian hasn’t had an easy road to the final and that should hold him in good stead.

He was taken to five sets in the second round of the tournament against an unknown Australian player. He was 1-2 down in sets before winning the final two sets with ease.

Following that win, he has taken on the likes of Gael Monfils, Rafael Nadal and Alex Zverev. He dropped only two sets to Zverev and Nadal, which is some effort given the opposition.

He possesses a huge backhand and big serve. That combination has seen him win 16 ATP singles titles and he has now reached three Grand Slam finals.

The #5 seed has struggled to beat players like Novak Djovokic in the past, because Novak can run all day, but his one-shot power is incredible.

He’s able to end a point at any given time. That’s an ability not every player has and if he can show that skill early, he could get ahead.

Bookmakers aren’t giving Thiem much chance. He’s currently paying $4.10 to win, but fans of Thiem are at least getting great odds.

Having dropped only one set throughout the tournament, it’s fair to say Novak Djokovic is a man in form.

The 32-year-old dropped a set in the first round but has since made easy work of some good opponents. His straight sets win over Roger Federer was all class and he’s just so tough to beat in these situations.

Djokovic is a player that doesn’t have any weaknesses. He has a good serve, terrific ground game and an ability to stay in a point.

His opposition can hit what should be a winner, but he has a knack of getting it back in play. It’s why he’s one of the best players of all time.

It’s not surprising to see bookmakers open him as the overwhelming favourite. The $1.24 is a touch short for our liking, but those odds were to be expected.

All the pressure is firmly on Dominic Thiem, as Novak has been there and done that.

Unfortunately, punters aren’t getting much value for Novak Djokovic in the head-to-head market.

There isn’t much point in taking the $1.24, so we’re going to look at other betting options to find some value.

Sets betting is a good place to find value and although we respect the ability of Dominic Thiem, we’re unsure if he’ll win a set.

Novak will pile all the pressure on early and it could force Thiem to start trying things he wouldn’t usually do.

It’s never easy to win a Grand Slam final in straight sets, but if anyone can do it, Novak can.

The Under 38.5 games is worth entertaining as well. If Djokovic does win in straight sets, the game will go under the total with ease.

He is good enough to win a set 6-1 or 6-2, which means he could drop a set and still see the total games hit the under.

Under 38.5 is worth taking and it should give value punters another chance of winning on the Australian Open Final.